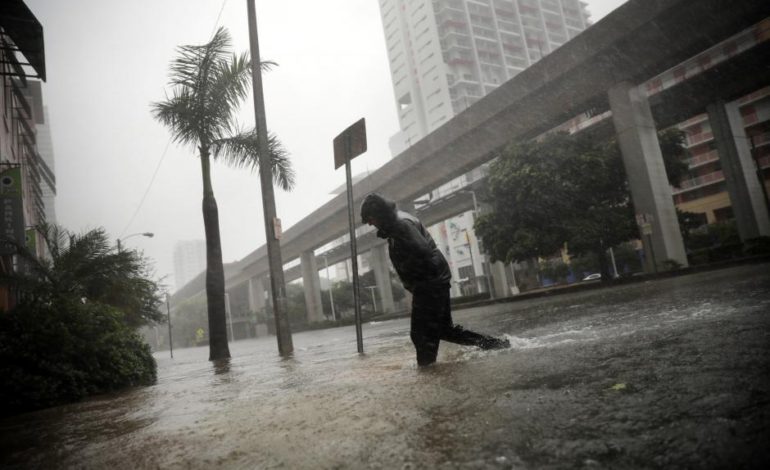 FORT MYERS/MIAMI (Reuters) – Hurricane Irma lashed the Gulf Coast of Florida with the brunt of its fury on Sunday afternoon, knocking out electricity to 2.5 million homes and businesses statewide while flooding streets and swaying skyscrapers in Miami.

Hours after barreling across the resort archipelago of the Florida Keys, the storm crept up the western shore of the Florida Peninsula to make a second landfall at Marco Island around 3.35 ET (1935 GMT), about a dozen miles south of upscale beach town Naples on the Gulf of Mexico.

Irma’s eye wall came ashore not long after it was downgraded from a Category 4 to a Category 3 storm on the five-point Saffir-Simpson hurricane scale, with maximum sustained winds of 120 miles per hour (195 mph).

Forecasters warned that Irma remained extremely dangerous as the monster storm toppled trees and power lines, peeled tiles off roofs and threatened coastal areas with storm surges of up to 15 feet (4.6 m). Tornadoes were also spotted through the southern part of the state.

Some 6.5 million people, about a third of the state’s population, had been ordered to evacuate southern Florida as the storm approached.

“This is a life-threatening situation,” Governor Rick Scott told a press conference. Curfews were declared on Sunday evening for the Gulf Coast towns of Tampa and St. Petersburg as several Florida counties reported arrests of looters taking advantage of homes left vacant by evacuations.

The storm killed at least 28 people as it raged through the Caribbean en route to Florida. On Sunday, Irma claimed its first U.S. fatality – a man found dead in a pickup truck that had crashed into a tree in high winds in the town of Marathon, in the Keys.

The storm’s westward tilt as it advanced on Florida put a string of Gulf Coast cities at greatest risk and spared the densely populated Miami area the full force of its wrath. The state’s biggest city, situated about 100 miles (160 km) east of Irma’s core, was anything but unscathed