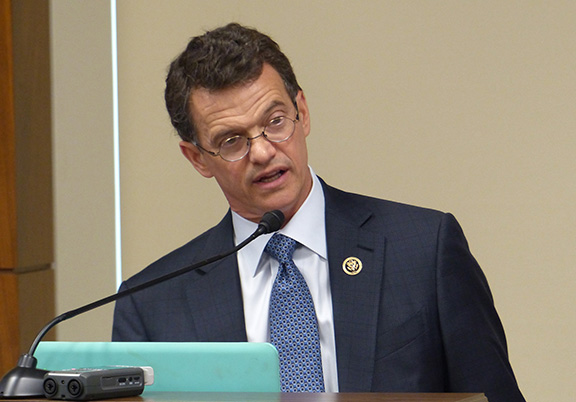 Washington — Republican Rep. Dave Trott (R-Birmingham) said Monday he will retire from Congress at the end of his second term and return to the private sector.

“Our country’s Founding Fathers envisioned a government where citizens leave private life, serve for a brief time, and then return home to their communities,” Trott said in a statement. “It has been an extraordinary privilege to serve the people of southeast Michigan in Congress…This was not an easy decision, but after careful consideration, I have decided that the best course for me is to spend more time with my family and return to the private sector.”

Last October, Waterford Township Supervisor Gary Wall told The AANews their decision to pass a resolution excluding Syrian refugees was not prejudiced, but was based on information from Trott, who spoke to the board that earlier that month.

In a video of the meeting, Trott said he was present when FBI Director James Comey testified before the House Judiciary Committee that intelligence from Syria was weak and “our vetting process is only as good as the information we have.”

Trott said he wishes to see the Refugee Program Integrity Restoration Act pass. It would give local communities the ability to refuse refugee settlement and give Congress the ability to set the number of refugees and establish process and admission requirements.

Trott took office in January 2015 after clinching the 11th District election and turning away his predecessor, former Republican U.S. Rep. Kerry Bentivolio of Milford, by nearly 33 points in the 2014 Republican primary.