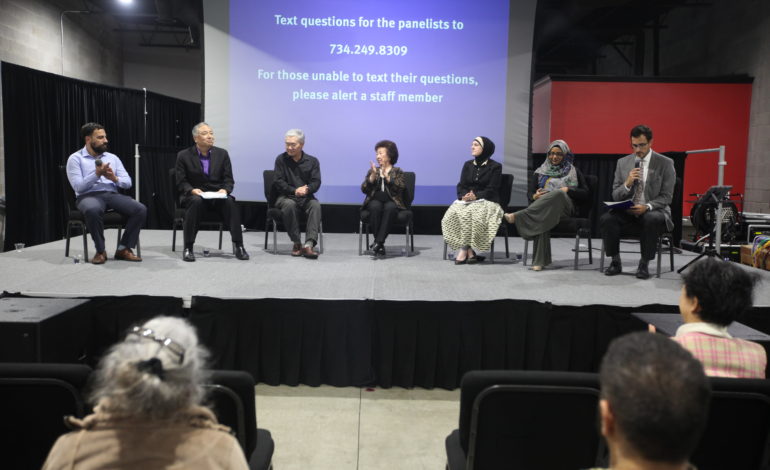 In 1942, President Roosevelt signed executive order 9066, which entailed the forcible removal of more than 110,000 Japanese Americans from their places of residence throughout the U.S. to internment camps across the nation.

The AANM town hall brought about discussion on how the government has responded to national security threats by treating a group as an “other.” The panel was comprised of members of the Japanese American and Arab and Muslim American communities.

Dr. Matthew Stiffler, the research and content manager at The AANM, served as event moderator.

“The two groups were profiled and stereotyped,” Stiffler said. “The national government took actions against them, against their civil rights, that were unconstitutional.”

Stiffler said non-Arab and non-Muslim groups have spoken out against the targeting of Arabs and Muslims over the years, including the Japanese American community.

“One of the things Japanese American activists will tell you is that they vowed never to let that happen to another community,” Stiffler said about how some Japanese Americans responded to how they were treated during and after WWII.

One of the panelists at the town hall was internment camp survivor Mary Kamidoi.

Kamidoi recalled that at age 11, she and her family were forced to move from their home in Stockton, California to their local fairgrounds, where she had to sleep in a horse stable.

At the end of the war, Kamidoi and her family were evacuated from the internment camp and had to start new lives with only the belongings they took to the camp. They settled in Michigan, which was very difficult for her as there were a lot of social stigmas surrounding Japanese Americans.

“There were people who had never seen someone like me,” Kamidoi said. “We went through a lot of hate.”

Kamidoi said her parents had a difficult time talking about how they were treated, but Kamidoi was compelled to speak about her experience. Over the years, she’s spoken to many groups on what happened to her and her family, as well as the Japanese American community.

Soji Kashiwagi, executive director and playwright for the Grateful Crane Ensemble in San Francisco, was another panelist whose parents survived the internment camps.

Kashiwagi said that the Japanese American community continues to feel the ramifications of executive order 9066 even today.

Namira Islam, co-founder and co-director of the Muslim Anti-Racism Collaborative, said that while things have improved in the U.S. since the 1940s, there are still major concerns for minority groups.

“There’s always been these really unjust policies that are often legalized into law, into actual mainstream understandings of what is right or moral,” Islam said.

Panelist Amy Doukoure said that after President Trump was inaugurated and the first version of the immigration or Muslim Ban executive order was signed, she still felt hope because so many people showed up to protest alongside Arabs and Muslims.

“There’s a long history of othering people in the U.S.,” Doukoure said. “We see a strong resistance at this time from allowing that to continue.”

Doukoure practices Islam, but wasn’t born Muslim. Once she decided to practice the religion and cover her hair, she encountered discrimination because she visibly appeared Muslim.

She said she’d received questions about why she wasn’t married to an Arab man and even hateful comments on how she needed to go “back home.”

The more Doukoure had to defend herself, the more she felt compelled to defend others; she is now a lawyer who earned her degree at the University of Detroit Mercy School of Law.

Ahmad Abuznaid, director of the National Network for Arab American Communities, which is powered by ACCESS (Arab Community Center for Economic and Social Services), said he was born in Jerusalem, Palestine, and that the discussion on encampments, barbed wire and direct ethnic cleansing is very familiar to him.

“I’ve been born into a proactive resistance by the very nature of existing,” Abuznaid said. “After 9/11 it was made clear to many of us that for some folks we didn’t fit in to the image of America.”

Stiffler said the ways in which the Japanese American and Arab and Muslim American communities have been targeted have lasting traumas, which include ongoing internal battles for some people.