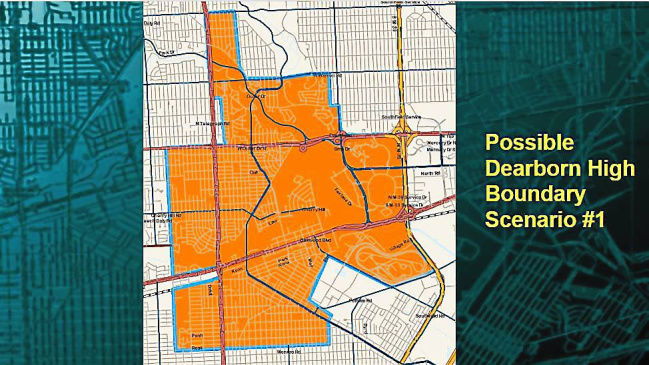 DEARBORN- No community members shared their feedback at the September 11 Dearborn Board of Education meeting regarding the trustees’ possible solutions for overpopulated high schools, including boundary line changes and class additions, as the turnout was low.

Still, board members expressed the hope that after the October 9 board meeting, the community will be equipped with more information and the attendance rate will have escalated by then.

As promised, the board again discussed overcrowding with Director of Student Services Abe Mashhour, in order to reach a more accurate understanding of the boundary line changes solution— tabling three options that all require additional classes at both Dearborn High and Edsel Ford High School. Mashhour noted that his evaluations are based off total student enrollment and do not consider the absence of students at certain hours of the day due to dual enrollment classes, the Collegiate Academy, work co-ops, the Michael Berry Career Center and the Center for Math, Science and Technology.

Mashhour said the first option to change boundary lines involves sending Woodworth Middle School students to two different high schools, while the rest of the middle schools would send theirs to one only.

“This system keeps us best aligned,” he said. “There’s no way around it… We have to split one school or else Fordson would be over 33-3400 students.”

In this scenario, all Bryant and O.L. Smith Middle School students would attend Dearborn High, which would end up with a total of 1,900 students. Edsel Ford would take all of Salina and Stout students as well as a minor share of Woodworth, resulting in 1,880 students overall.

Fordson High would take all of Lowrey and Unis students, in addition to the majority of Woodworth, for a total attendance of 2,780.

“Fordson is still going to be on the high end no matter how we look at it,” Mashhour said.

As for the second scenario, students at Smith, Stout and Woodworth would have to split, but the option would still move the least number of students, Mashhour said.

Edsel Ford’s total enrollment would be higher than Dearborn High with 1,980 and 1,800 students attending, respectively.

All Bryant students and sections from Smith and Stout would attend Dearborn High.

Edsel Ford would take all Salina students and shares from Stout, Smith and Woodworth.

Fordson would take Lowrey and Unis and the majority of Woodworth students for a total of 2,780.

The third option calls for splitting Stout students into all three high schools and Unis into two. Dearborn High would receive Bryant students and some from Stout and Unis to amount to 1,820 students.

Mashhour added that option one alleviates transportation issues  the district could face with boundary line changes. Most trustees preferred it more than the other two scenarios for that reason as well as the reduced number of split schools, but all three options will continue to be tabled in an effort to give the public the opportunity to compare for themselves.

“If you only give them one or two, then they’d feel like you haven’t considered the others,” Trustee Mary Petlichkoff said. “We’re going to show them what the others would look like and that way it is clearer… to see them all side by side.”

Thomas Wall, executive director of business and operations, also shared his data on funding availability for additions to both Dearborn High and Edsel Ford.

He said  Dearborn Schools could issue non-voter bonds of up to $24.5 million.

“It would be paid from our limited tax, which is our general fund,” he said.

He added that the $2.4 million profit from the sale of Howe School is available in the district’s fund balance and also explained that $850,000 a year will go for a new bond after the district completely pays back its former non-voter bonds.

According to Wall, adding four classrooms to Dearborn High and expanding its cafeteria would cost an estimated $3 million.

As for Edsel Ford’s additions, the cost could reach about $18 million to build a field house with a new gym and pool and also transform its old gym and pool space into classrooms.

President Mary Lane said there’s been talk that community members are concerned about a tax increase.

“I’m getting that message consistently,” she said. “We have financial constraints and our ability to pass a millage might be limited.”

The board members asked Wall to bring in different scenarios and numbers on Edsel Ford’s project to the next meeting, so there could be one reasonable option to choose from.

“There’s going to be something unpalatable about every [option],” Lane said, but a decision has to be made.