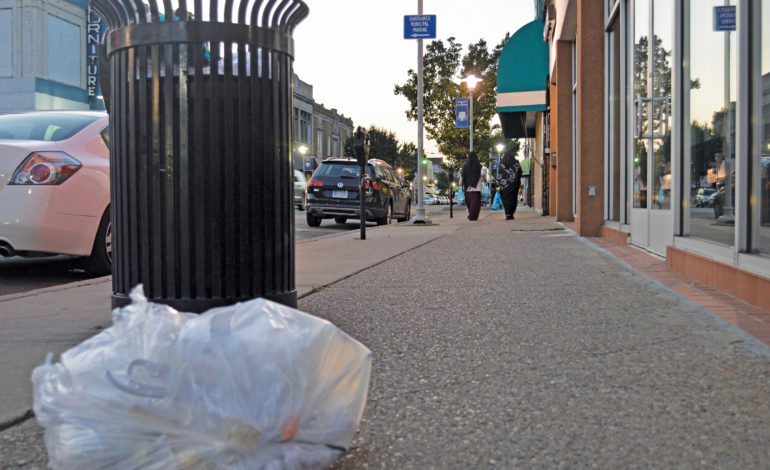 The only trash bag found on Hamtramck's streets, Thursday, Sept. 14 - Photo by The AANews

HAMTRAMCK — A councilmember in one of the most diverse cities in the nation is facing a backlash after he blamed a trash problem on immigrant residents.

“There is an issue with trash in Hamtramck,” Councilman Ian Perrotta said in an interview on WWJ AM 950. “I think some of it comes from the fact that some of our immigrant population comes from areas where regular trash collection and sanitation is not available, or not a priority.”

Hamtramck was a predominantly Polish town in the early 1900s. Today, it remains the city in Michigan with the highest number of foreign-born residents at 43.6 percent, according to the 2010 U.S. Census.
The majority of the city’s population are of Yemeni and Bengali decent.

Anam Miah, a Hamtramck councilman, mayor pro-tem and a Bengali American, told The AANews he and many residents find Perrotta’s comments “unfortunate” and “dividing.”

It’s not that they would not like a more active trash services in Hamtramck, but Miah said the city is not facing a unique garbage problem that is more severe than its neighbors.

“Mr. Perrotta subjected a whole group of nationality to say that they are not understanding of what sanitation is or do not value cleanliness in their homes, neighborhoods and streets,” Miah said. “That is a derogatory statement toward any people of immigrant status.”

He added that the remarks insinuate that residents of European origin are inherently cleaner.

Perrotta said the concerns came up during a youth town hall meeting and that city officials are implementing a program to place more trash cans along business corridors and educating residents about being “respectful.”

Perrotta subjected a whole group of nationality to say that they are not understanding of what sanitation is or do not value cleanliness in their homes, neighborhoods and streets. That is a derogatory statement toward any people of immigrant status – Anam Miah

Miah said he’s lived in Hamtramck for about 30 years and that the trash bins have been there for more than 12 years.

He added that he doubts Perrotta heard about the issue from a town hall meeting, but instead said it came from a presentation by young volunteers who had cleaned up parks and refurbished the garbage cans this summer.

“They never insinuated there was trash problem in Hamtramck,” he said.

“He could have said that our community can do a better job at clean ups,” Miah added. “He is supposed to be a uniting force.”

Kathy Angerer, Hamtramck’s acting city manager, told The AANews that because the city strives to be a place for people to live, visit and open businesses, officials are “continually working to improve our delivery of services, our appearance and how people perceive us when they’re here.”

She said Hamtramck faces similar waste problems as most rural and urban cities, echoing Miah’s observation, and added that city officials spent much of their revenue over the last two years improving Hamtramck’s four public parks. They’ve also partnered with youth from all over the area to help with planting flowers and bushes as well as blight removal.

This year, Angerer said she ordered more than 60 trash cans to be added in the streets in an effort to improve cleanliness.

She added that most residents enjoy a high quality of life in Hamtramck, where they have get anything they need within 2 square miles, and that the city has won awards for walkability.

Akil Alhalmi, an educator and City Council candidate in the 2017 primary municipal elections, told The AANews Hamtramck doesn’t have a trash problem, but there is a noticeable difference in the conditions between now and prior to a recent heavy influx of immigrants.

“It has a side of truth,” he said. “We have sanitation procedures they don’t have in other countries.”

However, instead of scapegoating others about the issue, Alhalmi urged Councilmembers to work together in seeking a resolution, including actively issuing tickets or collaborating with community organizations to hold education seminars on laws and cultural norms many newcomers might not be familiar with.

“As a Councilman, he has the authority and is responsible to find solutions, not point fingers,” Alhalmi said of Perrotta.

He added that many in Hamtramck wish to solve problems like trash and traffic, but think Perrotta’s sentiments held more negative undertones.

“He represents everybody in Hamtramck, not one ethnicity,” Alhalmi said, adding that the Council should welcome challenges that arise from demographic changes and seek to adapt.