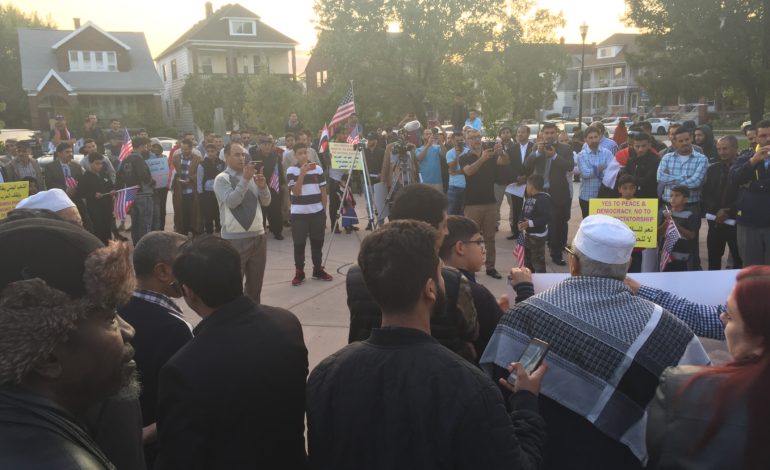 HAMTRAMCK – A crowd of about 200 people attended a protest and vigil in front of Hamtramck’s City Hall on Saturday, September 9. The event focused on denouncing all violence in Yemen, the internal and external wars that continue to cripple the nation’s population of more than 25 million.

Hamtramck is about 30 percent Yemenis according to City Councilman Saad Almasmari.

Ibrahim Aljahim, a community organizer and activist, organized the event in less than six days. Aljahim told The AANews he had been watching the tragic events unfolding in his old country for the last three years but, “it’s getting sickening; all these people getting killed, these kids, all these innocent lives.”

Aljahim said the protest is not in support of any of the Yemeni factions involved in the conflict. The intention, instead, is to stop the wars and the subsequent violence from every side internally and to halt the bombardments and interference from the outside.

Aljahim immigrated to America from Yemen in 1990 on Christmas Eve. Since then he has been active in public life, advocating for humanitarian rights in and around his community.

Hamtramck Mayor Karen Majewski spoke at the event, alongside members of the City Council.

Osama Siblani, publisher of The AANews, served as the keynote speaker.

“I am sick and tired of blaming Saudi Arabia and Iran. I don’t want to blame them; I want to blame the United States of America, my country, the greatest country on the face of this Earth,” Siblani said. “America needs to put its foot down and say, enough killing in Yemen.”

Siblani asked the crowd to get involve and write to their representatives in Congress, demanding an end to the Yemen war.

“We have our voices; we have our men, our women and our children that need us to protect them,” Dr. Sidney Griffin, bishop of Common Word Alliance and the Clergy Interfaith Organization, told the crowd. “We cannot protect them by not speaking out; we are going to have to speak to power.”

“You are here doing a positive event, but this isn’t where it stops,” Councilman Anam Miah said. “You must find ways to contact your congressmen, your state senators. Let them know you are concerned about what is going on in Yemen.”

Speaker after speaker came to the podium after Siblani to denounce what’s occurring in Yemen.

The situation is complicated, to say the least.

From 1990, when the north and south parts of Yemen reconciled and united, Ali Abdullah Saleh reigned as the country’s president until 2012 when he signed an agreement to transition power to his vice president, Abd-Rabbu Mansour Hadi.

He’d refused to sign the agreement on multiple prior occasions, but months after recovering from an assassination attempt in June 2011, Saleh signed over power to Hadi in exchange for complete immunity from prosecution.

Once Hadi transitioned to power, the Houthis, a rebel group fighting in Yemen since 2004 and now led by Abdul-Malik al-Houthi, sided with Saleh and took control of the capital, Sanaa.

Hadi fled to Saudi Arabia, where he remains, after the capital fell to the Houthis.

In March 2015, Saudi Arabia, along with a coalition of neighboring countries, began a bombing campaign against Yemen which destroyed its fragile infrastructure and displaced millions of Yemenis in and outside the country.

The fighting between the Houthis and Hadi, complicated by the involvement of Saudi Arabia on behalf of Hadi, is exacerbated by a siege of Al-Qaeda fighters who’ve taken advantage of the chaos and taken control of vast areas in southern and eastern Yemen.

The impact continues to grow, but figures from a U.N. Security Council document from April 2016 show, “A fivefold increase in cases of recruitment and use of children by armed groups.”

The document also stated that, “A shift was observed from largely voluntary enlistment towards forced or involuntary recruitment through coercion, including through the provision of misleading information or incentives.”

In the same document the United Nations verified 101 attacks on schools or hospitals, noted that humanitarian efforts are being restricted by all sides, and wrote, “Intensive aerial bombardment was followed by ground fighting, taking a devastating toll on the civilian population. Grave violations against children increased dramatically as a result of the escalating conflict.”

“Yemen has the second largest natural gas reserve, the most ports and the most natural islands,” Aljahim told The AANews. “I believe that the war in Yemen is regarding those three issues.”

The United States may be contributing, and benefiting, from the situation in Yemen, according to a report from Vox.com. The report says the U.S. has authorized more than $20 billion in weapon sales to Saudi Arabia since March 2015, including tanks, cluster bombs and F-15 fighter planes. The report also notes that U.S. refueling planes refuel Saudi jets mid-air, enabling the Saudis to drop more bombs, more often on Yemenis.