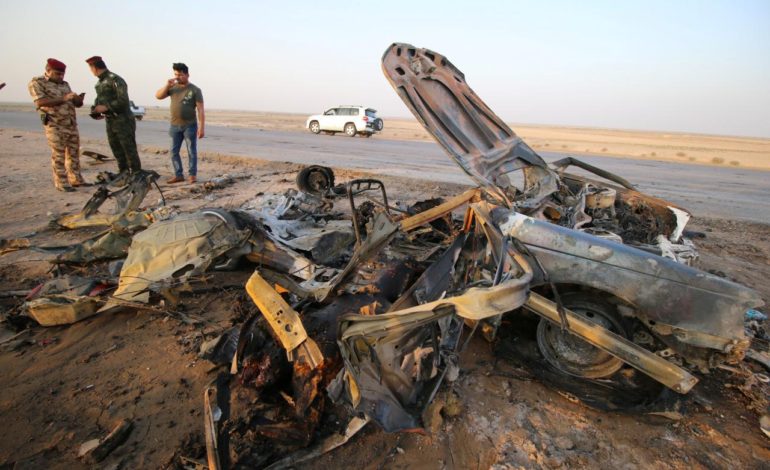 Iraqi security forces inspect the site of a bomb attack at a police checkpoint on a highway near the southern Iraqi city of Nassiriya, Iraq, Sept. 14/ REUTERS

BAGHDAD ― Three suicide attacks claimed by ISIS killed at least 60 people in southern Iraq on Thursday, a health official and police sources said, suggesting a shift in the ultra-hardline group’s tactics since it lost control of its stronghold in Mosul.

Iraqi and Kurdish security officials say the militants are likely to wage a guerrilla war in Iraq after their self-proclaimed caliphate in Mosul collapsed.

Security officials described Thursday’s attacks as an attempt to send a message to ISIS followers that the group is still strong and can operate in other parts of Iraq following its territorial losses.

Wearing security force uniforms and driving stolen army vehicles, the attackers targeted a police checkpoint and two restaurants on a highway near the city of Nassiriya, using car bombs and suicide vests, the sources said.

At least 100 people were injured, the police said in a statement.

The deadliest attack was at a restaurant west of Nassiriya. “One attacker blew up his suicide vest inside the crowded restaurant while a group of other gunmen started to throw grenades and fire at diners,” said police colonel Ali Abdul Hussain.

Police sources said some police officers had died in the checkpoint attack, but the toll from that incident remained unclear.