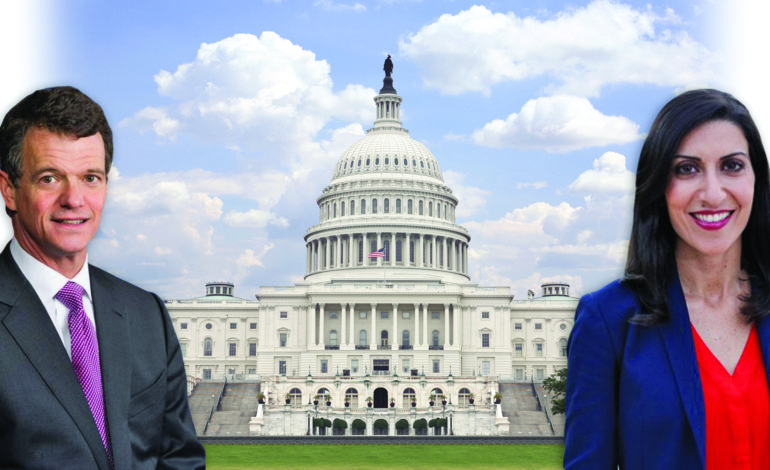 WASHINGTON — As U.S. Rep. Dave Trott (R-Birmingham), known for his anti-immigrant stance, is set to retire from Congress at the end of his second term and return to the private sector, questions have been raised regarding the possibility for a Democrat to take his place.

“Our country’s Founding Fathers envisioned a government where citizens leave private life, serve for a brief time and then return home to their communities,” Trott said in a statement. “It has been an extraordinary privilege to serve the people of southeast Michigan in Congress…This was not an easy decision, but after careful consideration, I have decided that the best course for me is to spend more time with my family and return to the private sector.”

Last October, Waterford Township Supervisor Gary Wall told The AANews the township’s decision to pass a resolution excluding Syrian refugees was not prejudiced, but was based on information from Trott, who spoke to the board that earlier that month.

In a video of the meeting, Trott said he was present when former FBI Director James Comey testified before the House Judiciary Committee that intelligence from Syria was weak and “our vetting process is only as good as the information we have.”

Trott, who endorsed Donald Trump in the 2016 presidential race, said he wishes to see the Refugee Program Integrity Restoration Act pass. It would give local communities the ability to refuse refugee settlement and give Congress the ability to set the number of refugees and establish process and admission requirements.

Trott took office in January 2015 after clinching the 11th District election and defeating his predecessor, former Republican U.S. Rep. Kerry Bentivolio of Milford, by nearly 33 points in the 2014 Republican primary.

Paul Kanan, communications director for the Michigan Democratic Party, told The AANews the dynamic of the race has changed.

While the more than half of the district voted for Trott in 2014 and again in 2016, his resignation has opened doors for more candidates of both parties to consider throwing their hats in the race, Kanan said.  He added that many of Trott’s constituents have been “unhappy with his performance…and his inconsistent and poor leadership.”

Kanan pointed to efforts to repeal the Affordable Care Act (Obamacare) led by many Republican officials across the nation, with the 11th District being “ground zero.” He said people have moved past the idea of completely getting rid of it and are now aware of the underlying intentions to undercut Obama’s legacy. Trott has voted “in lockstep” with Trump and his Republican supporters, Kanan added.

“Folks want someone who’s willing to fight for the best interest of constituents,” Kanan said. “Willing to look for good ideas and look ahead at things we can do to improve the healthcare system and put personal interests aside.”

That is why he sees a big possibility democratic candidates like Saad could easily win the race.

While Trott’s Republican base is secure, Kanan added that his decision not to seek reelection also speaks for itself, as he knows Trott could see the possibility that retaking the seat is slim.

Kanan also said people’s frustrations with anti-immigrant and anti-minority policies has emboldened many from those communities to run for office, while unabashedly wearing their identities on their sleeves.

In Saad’s campaign video, for example, she explicitly states she is a Lebanese American Muslim aiming to work for immigrant rights.

While that is daring approach in a majority Republican district, Kanan said the approach — one that speaks to voters who look for honesty in a candidate— might just work.

“Trump and his large swath of his allies in politics have turned this into not only things they’re saying being wrong, but being against the ideals of this country,” he said.

On the other hand, he added Trott and other republicans either truly believe what they preach, or are unable to voice their true opinions in fear of losing their political base.

“Diversity is always what’s made us strong,” Kanan said. “Individuals are ready to fight for that, and that’s an approach that works.”

WASHINGTON – Republican infighting over the fate of immigrants brought illegally to the United States as children could be so vitriolic that the party loses control of the U.S. House of Representatives next year, Steve Bannon, a former adviser to President Trump, said in an interview airing on Sunday.

Bannon, whose far-right views on immigration, climate and trade helped shape Trump’s presidential campaign and his first months in office, was fired by the Republican president last month in a push to end factional fights within the White House.

In an interview with the CBS program “60 Minutes,” Bannon predicted Republicans could lose control in the House in the 2018 congressional elections because of a looming battle over what to do about 800,000 immigrants known as “Dreamers.”

Trump said last week he would scrap a program called Deferred Action for Childhood Arrivals, or DACA, that allowed the young immigrants to live and work in America.

Trump gave the Republican-controlled Congress six months to come up with an alternative, saying he would “revisit this issue” if lawmakers could not agree.