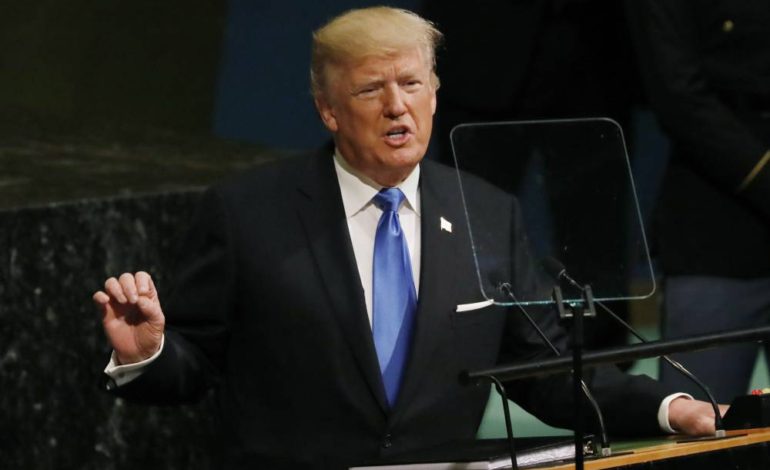 UNITED NATIONS ― President Trump escalated his standoff with North Korea over its nuclear challenge on Tuesday, threatening to “totally destroy” the country of 26 million people and mocking its leader, Kim Jong Un, as a “rocket man.”

In a hard-edged speech to the United Nations General Assembly, Trump offered a grim portrait of a world in peril, adopted a more confrontational approach to solving global challenges from Iran to Venezuela, and gave an unabashed defense of U.S. sovereignty.

“The United States has great strength and patience, but if it is forced to defend itself or its allies, we will have no choice but to totally destroy North Korea,” Trump told the 193-member world body, sticking closely to a script.

As loud, startled murmurs filled the hall, Trump described Kim in an acid tone, saying, “Rocket man is on a suicide mission for himself and his regime.”

His remarks rattled world leaders gathered in the green-marbled U.N. General Assembly hall, where minutes earlier U.N. Secretary-General Antonio Guterres appealed for statesmanship, saying: “We must not sleepwalk our way into war.”

Trump’s most direct military threat to attack North Korea, in his debut appearance at the General Assembly, was his latest expression of concern about Pyongyang’s repeated launching of ballistic missiles over Japan and underground nuclear tests.

His advisers say he is concerned about North Korea’s advances in missile technology and the few means available for a peaceful response without China’s help.

Inside the hall, one man in the audience covered his face with his hands shortly after Trump made his “totally destroy” comment. Swedish Foreign Minister Margot Wallstrom crossed her arms.

“It was the wrong speech, at the wrong time, to the wrong audience,” Wallstrom later told the BBC.

Trump did not back down, instead later tweeting out the line in his speech vowing to destroy North Korea if needed.