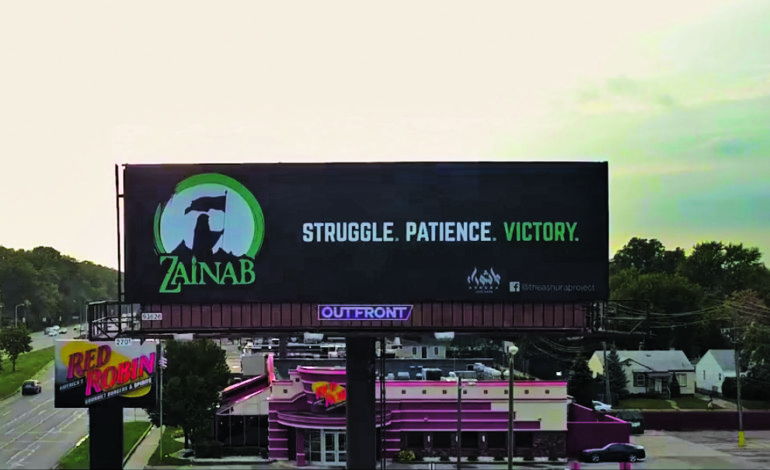 DEARBORN — This year, Friday, September 22, marks the beginning of Ashura, the 10-day commemoration of Imam Hussein’s (the Prophet Muhammad’s grandson) martyrdom and his family and follower’s sacrifice— known as a historical tragedy mostly observed by Shi’a Muslims.

Every year there’s an increase in social, political and economic injustices shattering nations worldwide, but this annual remembrance and message of Imam Hussein’s fight for justice 1,400 years ago tends to counteract these devastations by generating humanity and reform in the thoughts and acts of Muslims and non-Muslims alike.

During the 10th day of Muharram, the first month of the Islamic Calendar, Hussein and his army of 72 soldiers fought 1,000 corrupt militants, known as Umayyads, in the battle of Karbala. Umayyads held a similar ideology to ISIS— promoting brutality and tyranny.

Shi’a Muslims typically commemorate the imam’s and his family’s bravery and sacrifice for the first nine nights of Muharram in mourning, listening to lessons and recitals of segments from their story up until the 10th day— Ashura— the day the imam and his soldiers were martyred near the Euphrates river, from which they and their families were denied water. After the terrorists of the time murdered Hussein and his soldiers, they set the heroes’ tents on fire, terrorizing their women and children and holding them captive. Hussein’s ill son, the only one not permitted to fight, was also imprisoned.

On the morning of Ashura, an Islamic scholar narrates the full battle of Karbala and a procession usually follows right after to spread the imam’s philanthropic message for the human race.

This year, Islamic scholars on an international scale asked narrators to be careful when researching and putting together their presentations for the 10 days as there could be parts that have been spread orally only, or may have been documented in one or two Islamic books or not at all.

According to scholars and organizations involved, readers are limiting their narrations to stories traced in most of the Islamic books, avoiding any exaggerations and illogical additions they might have heard over the years. Sheikh Ibrahim Yassine of the Islamic Center of America told The AANews that readers who go out of line in their narrations may be uneducated on the matter or at times not devoted enough to the mission of Imam Hussein.

He said narrators must be dedicated to researching properly, so they don’t cross the line on the religious and logical end, but rather read the stories that are historically proven in Islam.

Yassine also said that the tragedy of Ashura itself is enough to keep the imam’s message alive, so readers shouldn’t add information they’ve heard that may have been vaguely documented.

He said it’s an issue that must be attended to.

Ali Nasser, public relations director of The Ashura Project, a non-profit organization that commemorates the tragedy of Ashura by holding lectures, readings, plays, food drives, charity events and other activities for the community, said that they’ve taken drastic measures for their recitation program this year.

He said that they’ve worked together for months to take out any information that seemed not completely evident.

The Ashura Project’s lecture and narration program will be held in English and then in Arabic at Great Revelations Academy at 6:15 p.m. and 8:30 p.m., respectively, through Sept. 30.

The English lecturer is Sheikh Mahdi Rastani and the reader is Rami Bijayji. For the Arabic segment, Yassine will lecture and Ali Hijazi will recite.

Spreading the message of Imam Hussein through actions

A few days ago, The Ashura Project produced a billboard on Ford Road in Dearborn that says, “Zainab: Struggle. Patience. Victory.” Last year, their message was, “Hussein unites us.”

“The message on the billboard [this year] is actually our campaign,” Nasser said. “We needed to shed light on what lady Zainab (the sister of Imam Hussein) had to go through to achieve victory. No one can achieve victory without going through struggle. Struggle requires you to be patient and then you achieve victory.”

He said people from all religious backgrounds can relate to this humane message.

Also, charity during Ashura is highly practiced as it is one of many aspects Muslims learn from these tragic stories. Mosques in Dearborn and all over the world collect money to give to the less fortunate and organizations start charitable actions to supply those in need— Muslims and non-Muslims alike.

For example, The Ashura Project is again starting up its food drive in the name of Hussein. Last year the organization was able to feed 1,175 people from diverse backgrounds.

“Giving back to the community doesn’t come to just Muslims, but to whoever is in need,” Nasser said.

Those interested in giving can bring in unexpired or non-perishable food items, like canned fruits and vegetables, tuna fish, peanut butter, long lasting grains, healthy oatmeal and cereal to the Islamic Center of American or Great Revelations Academy.

Sheikh Yassine said donating is an act that permits Muslims to truly live the commemoration of Ashura and the message of humanity that comes with it and based on that, live Islam.

The Ashura Project’s fifth annual “March for Justice” procession is set for Sunday, October 1, at 2 p.m., starting at Fordson High School’s parking lot and ending at Ford Woods Park. Muslims and non-Muslims can openly show their opposition to oppression of all sorts and their demand for justice with banners provided by the organization. Community leaders will also speak out against injustices around the world.