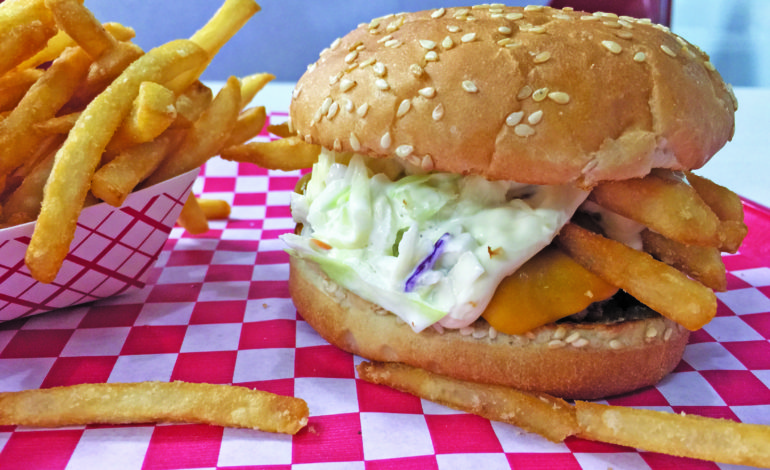 The Lebanon burger from Good Burger - Photo by The AANews

DEARBORN — A new burger joint trend is developing in the Dearborn area. At least eight burger joints have opened in Dearborn and Dearborn Heights, with a number of them opening in the last few years.

The burger joints are popular in Dearborn because they offer halal meat on the classic American dish. 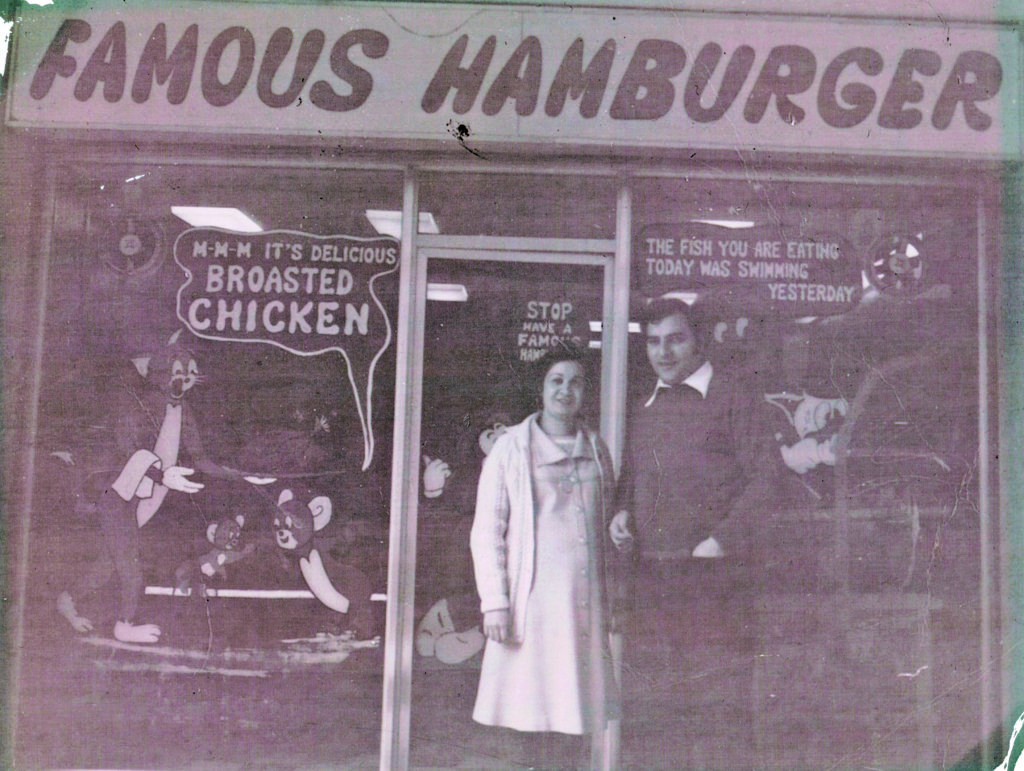 Feisal and Janan Hider, parents of Mohammed Hider, standing in front of Famous Hamburger in Beirut Lebanon in the early 70s.

The burger trend in Dearborn may have been started by the Hider family, who opened Famous Hamburger in east Dearborn in 2004 upon noticing the lack of halal burgers being offered in the area. They were also aware of the plethora of Middle Eastern-style cuisines already available.

A second Famous Hamburger opened in west Dearborn in 2014.

The Hider family is acute at making these observations. In 1968 Hussein Hider opened his burger joint, Little White Castle, in Beirut’s Badaro neighborhood after having identified the lack of hamburgers in the area. Two years later, the business had become so renown Hider changed the name to Famous Hamburger after moving to a new location in Beirut.

However, on opening day, Hussein Hider passed away and the burger hangout truly became a family business, with Hussein’s son Feisal Hider taking over the responsibilities.

Feisal brought the business to Detroit and later to Dearborn.

His son, Mohammed Hider, opened the location in West Dearborn.

“The burger trend is amazing,” Mohammed Hider told The AANews. “There have been multiple places that have opened in the last two years, and it has only helped us. The more competition, the stronger your business can be because it makes you hungry, and there is enough (demand) to go around.”

He also said burgers are very popular and people see commercials for them all the time.

“They don’t have the chance to eat it because of the halal factor,” Hider said. “We want to give them that, in a gourmet setting, in a place you can sit down, get served and really enjoy a great all-American burger.” 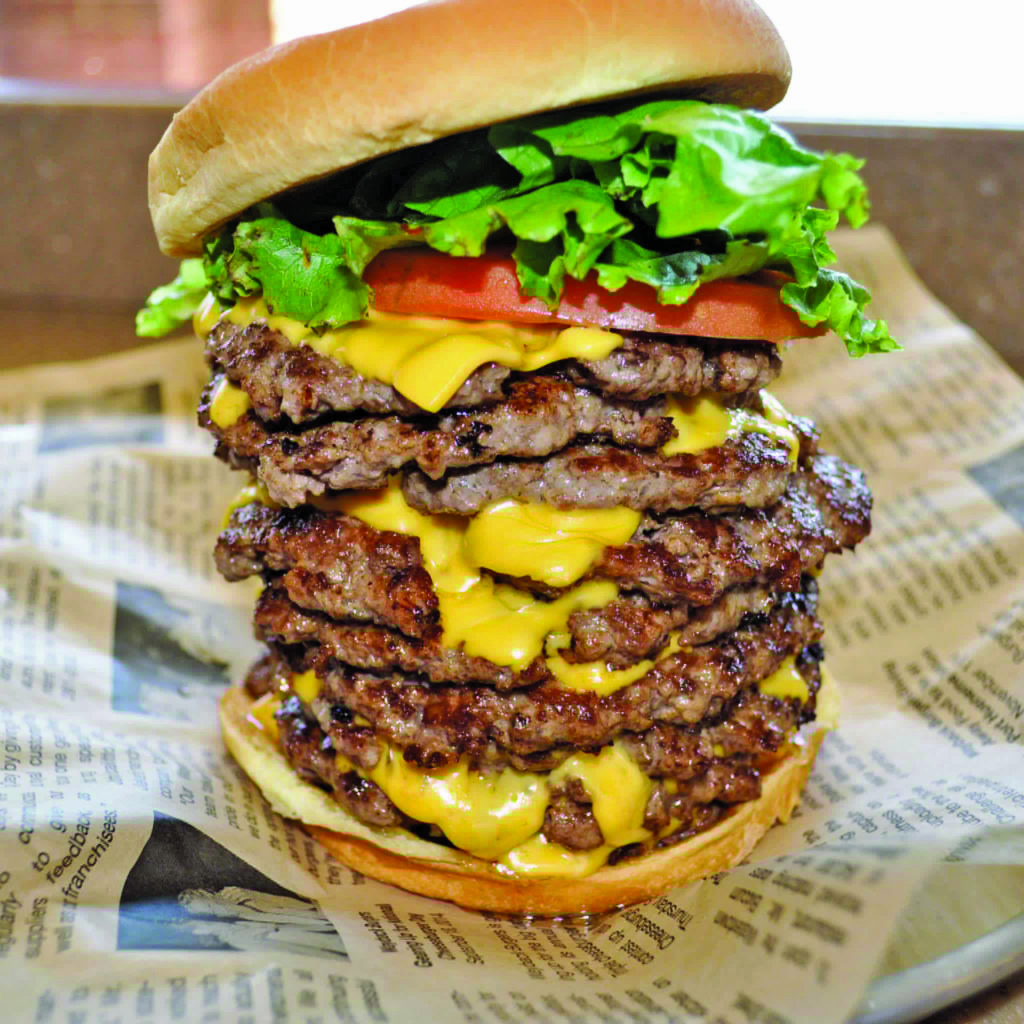 Latifeh Sabbagh, one of two partners of Wayback Burgers in Dearborn Heights, said she and her partner, Sam Saab, initiated the process of opening the location in 2015 and opened their doors in May of 2016.

“Our beef is both kosher and halal,” Sabbagh told The AANews. “We were looking for a franchise that would allow us to do 100 percent halal, which is very difficult. It was difficult to find an American franchise that was going to allow us to do a full menu as 100 percent halal. When Wayback gave us that opportunity, we tried the product; it was amazing and we decided to bring it to the Dearborn/Dearborn Heights area.”

Sabbagh said Wayback Burgers has more than 140 locations across the U.S., as well as international ones. At her location, she said the double bacon burger is the most popular burger, boasting high grade halal beef bacon that she says is enjoyed by pork bacon lovers as well.

Sabbagh affirmed that the business doesn’t offer any food products that she wouldn’t have in her own home.

On September 19, National Cheeseburger Day, the Dearborn Heights location had a timed challenge to eat its triple, triple burger, a nine-patty behemoth of a burger with the quickest time winning $3,333.

“We have a ton of foodies in this community, so it’s a nice thing,” Sabbagh said of the burger trend developing in Dearborn. “I know we have many burger joints, but I find it to be a very beautiful thing that we are all contributing to this community and making it grow as one.”

Ali D, the store manager at Good Burger’s Dearborn location, said they started out inside a gas station before opening a burger joint of their own in Garden City in 2014. In 2015, they opened the location in Dearborn. He said Friday nights get extremely busy after high school football games as well as on Sundays, bringing in a lot of families.

“All our burgers are great,” Ali told The AANews. “It really depends on the person. We’ve got burgers for all kinds of people. Build your own burger, veggie burger, chicken burgers, you name it.”

He said the owner of the growing burger joint is a graduate of the University of Michigan-Dearborn and his first business is the one that originally opened in the gas station.

The burger trend is evident by the number of burger joints sprouting up throughout Dearborn. They’re beginning to compare to the number of restaurants offering Middle Eastern cuisine.

In addition to the well-known national chains and Miller’s Bar,  which has been around since 1941, Dearborn is home to the following burger joints, all owned by Arab Americans and serving halal meat: A1 Dogs and Burgers, Brome Modern Eatery, The Butcher’s Grille, Famous Hamburger, Good Burger, Sonic and Taystee’s Burgers, while Dearborn Heights has Wayback Burgers.