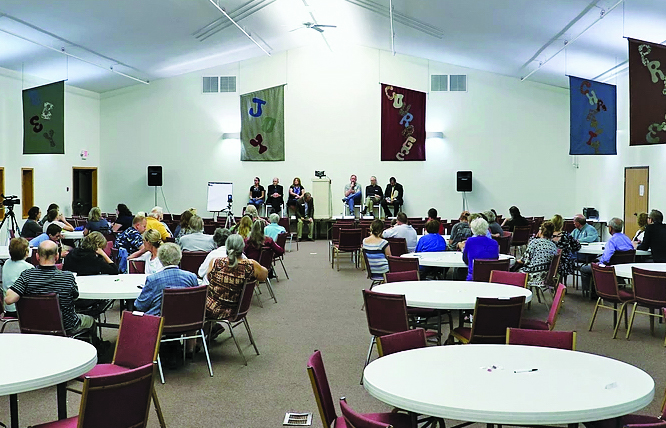 Interested citizens took part in the Kalkaska for Peace roundtable on Sept. 15 - Photos by Matthew McDermott

KALKASKA — In the wake of several anti-Muslim sentiments posted by Kalkaska Village President Jeff Sieting, a group of Kalkaska County residents have formed a nonprofit organization to promote education and understanding.

Established in July, Kalkaska for Peace (KFP) came about because of the negative image the village received, both within and outside the community, according to KFP Chair Elizabeth Dunham. She said KFP saw a great need to start promoting understanding and communication.

Dunham witnessed serious misunderstandings between neighbors and community members about other religious and ethnic groups since Sieting posted his comments. The panel consisted of people of multiple faiths and philosophical traditions

According to the KPF website, the organization’s mission statement is, “Working toward developing a safe, inclusive and welcoming community by promoting non-discriminatory businesses, educational opportunities and political engagement.”

In August, KFP members circulated a petition through change.org, urging the Village Council to denounce Sieting’s hate speech. As of press time, approximately 1,200 people had signed it.

KFP also held an interfaith roundtable event on September 15 in partnership with the Michigan Roundtable for diversity and inclusion and the Michigan Muslim Community Council (MMCC). The well-attended event included state leaders and leaders of different faiths and philosophical backgrounds. Steve Spreitzer, president of the Michigan Roundtable for Diversity and Inclusion, moderated the event

Attalla was the Michigan civil rights commission appointee under Gov. Engler from 1991-1998. He said he was compelled to reach out to the people in Kalkaska who were denouncing hate and bigotry to tell them “thank you.” “I decided it is very important for Muslim Americans to reach out to those who are speaking out against bigotry and against Islamophobes,” he said.

Attalla’s trip last weekend was his second time in Kalkaska. He’d previously made the 240-mile drive to Kalkaska in an attempt to attend a Village Council meeting. However, six of the seven members did not show, including Sieting, so the meeting was cancelled.

Attalla still had an opportunity to talk with locals residents.

“No one argued,” he said. “It was very diplomatic by nature.”

Steve Spreitzer, president and CEO of the Michigan Roundtable for Diversity and Inclusion, served as moderator at the interfaith roundtable event.

He said Sieting had planned to attend the event, which Spreitzer said, “threatened the safety of the event.”

“We worked with law enforcement and the state police and county sheriff to make sure the space was secure,” Spreitzer said.

On August 28, the Kalkaska Village Council passed a resolution-2017-024 to affirm the rights and protections of all persons.

KFP has applauded this resolution, but said on its blog that, “This statement does not absolve the hateful rhetoric already spoken, remove its negative effects on this community or act as a substitute for an apology.”