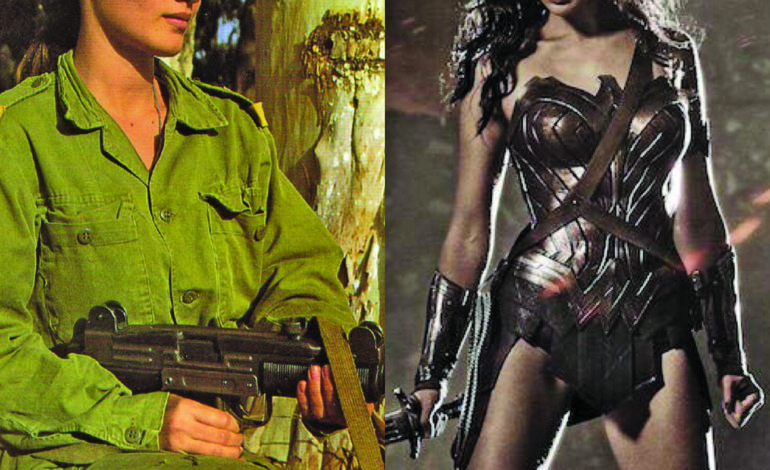 Most women will agree that female representation in the media is incredibly important for a plethora of reasons— not only in media but also politics and other platforms lacking opportunity for female participants.

Providing women of all ages a strong and positive role model could break a toxic habit and pattern of accepting and expecting degrading societal roles and standards that have been appointed to us. A struggle that many women face, especially women of color, members of minority faiths or members of the LGBTQ community, is the women presented in the media for the sake of progressiveness have never stood with or supported either groups of people. For me, and many other women, “female representation” seems useless for these reasons.

When it comes to the new film “Wonder Woman”, many questions arose for me personally: Would I ever take my hypothetical Palestinian daughter to see a film lead by a woman who works and supports the genocide and ethnic cleansing of her people? Would my hypothetical daughter forget all the immense damage Gal Gadot has done in Palestine, Ethiopia, Lebanon, Syria, etc, due to the fact that she is female? The omnipresent term “White Feminism” comes to mind in cases such as these. The powerful, White upper class has not faced the oppression and devastation that  Gadot and her comrades in the IDF (Israeli Defense Forces) have caused. In fact, they have and continue to profit from it, whether that be in political backing from the Zionist lobby, brutal arms deals, etc.

It is quite easy to feel hopeless in situations as this. What power does a university student in Seattle have? One factor many forget that carries power and impact is our financial and monetary support of companies, corporations, films, etc. Along with the list that the BDS (Boycott, Divest, Sanctions) movement has provided, I made the choice to avoid this film completely. Gal Gadot does not support women. DC’s decision to cast Gadot was not motivated by feminism, but by its support of the prevailing Zionist and White supremacist agenda in the media and the United States as a whole. If they wanted to make a feminist political statement, they wouldn’t let a member of an anti-Arab (and anti-African for that matter) army, which practices the ethnic cleansing and genocide of indigenous peoples, play the role of an Amazonian woman — an indigenous woman.

It comes down to what women truly need out of the feminist movement, not only in the United States, but globally. In the eyes of many Americans, women of color don’t enter their minds in relation to the feminism conversation; resulting in them feeling no sense of betrayal when they hear that Gal Gadot is the perfect “White” woman lead to the new Wonder Woman film.

If Americans are truly committed to seeing their country evolve into a place that values equity for women and other oppressed peoples, it is vital that the growing exclusivity applied to this standard is banished. This can be applied to many mainstream and growing movements in the United States today. If you marched with the Pride parade in 2017, for example, the intersectionality within your solidarity is not an option. You must march for justice against brutal police who have slain and abused a record number of Black trans women. You must march against the Pinkwashing Israel has propagated while abusing LGBTQ Palestinians. You must march against all forms of LGBTQ abuses. It is not a game of picking and choosing, but one of mobilizing collectively for the same value of justice, regardless of the various labels and the backlash affiliated with each of the causes.

I personally have come to the conclusion that this film was nothing but just another trick played on America’s juvenile approach to the empowerment of women. They put a woman [in a theatrical film] and the historic oppression of women is over, regardless that that woman herself fights for the propagation of oppression of other women all over the Middle East, Africa and even the United States.

We saw similar events take place during Barack Obama’s presidency. They put the first Black man in the White House and White America deemed itself post-racial, despite the fact that the Obama administration continued the heavy militarization of the police in the United States, with the help of the IDF’s armed forces training, which directly targets and oppresses the Black community in this country. While his administration was busy bombing Somalia, Libya and countless other African and Arab countries, he was still revered as a savior for America’s suffering Black community.

Likewise, Hillary Clinton dreamed of blazing the trail as the first female president, while betraying women everywhere as she schemed to overthrow the sovereign governments of Honduras and Libya. She too has failed to lift up women throughout the world.

For many people, the sentiment of “Wonder Woman” was far more than “just a film.” It was far from being a sign of evolution in the American feminist movement. Casting a woman who is a veteran of one of the most heavily militarized countries on the planet is not a sign of progress. But it does give Americans an illusion of progress. White American feminists can rest a little easier with the flawed assurance that they have done their job. We, whether we are Palestinians, people of color, LGBTQ or religious minorities, we don’t stand to gain anything from their illusion.

-Zarefah Baroud is a media and communications student at the University of Washington.