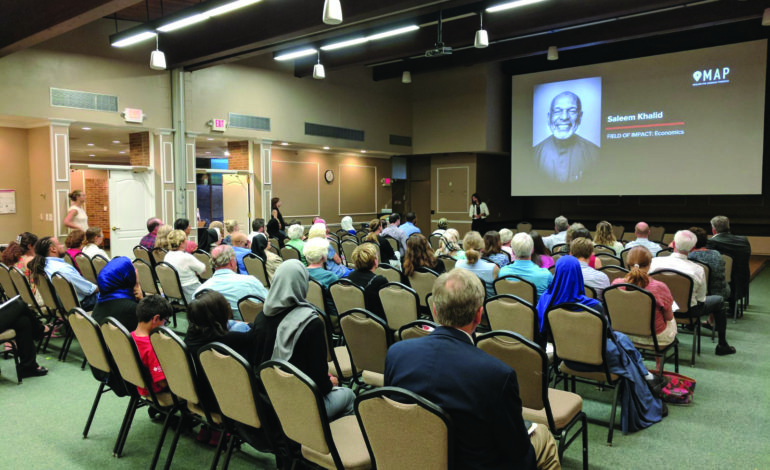 PLYMOUTH — The city of Plymouth invited the Institute for Social Policy and Understanding (ISPU) to present its Muslims for American Progress (MAP) project research findings and photo series at the Plymouth Cultural Center Sept 18-20.

Prior to the event, Plymouth Mayor Dan Dwyer released a statement saying the city was looking forward to the exhibit and forum. He also said Plymouth is a welcoming city.

During the three days, the photo exhibit was on display at the Plymouth City Hall for the public to view.

Rebecca Karam, the principal investigator for MAP, shared data on contributions by Michigan Muslims through a Power Point presentation for roughly 70 attendees.

After the presentation, three panelists, who also featured in the MAP photo series, shared details about who they are and answered questions from the audience. One panelist was urologist Dr. Mahmood Hai, who’s made major international contributions to the field of urology.

Hai shared a Power Point presentation to give details about his life. He said he tries to practice certain principles in his daily life that include showing kindness, love and patience to everyone, and also the belief that everyone was created equal in the eyes of God.

Panelist Zaynab Salman is a school teacher in the Plymouth-Canton School District. She talked with the audience about how she believes in being present for her students.

One story Salman shared described how she helped a student who was having a difficult time putting a Band-Aid on a cut finger.

“He said, ‘I never thought you’d do something like that,'” Salman said.

Salman said that through her efforts as an educator, she wants her students to know that they are cared for and she wants to help them reach their full potential.

Dawud Walid, executive director of the Michigan chapter of the Council for American-Islamic Relations (CAIR-MI) served as the third panelist. In his introduction, he said he grew up in Chesterfield, Virginia, walking past homes that flew Confederate flags. He also said he served in the U.S. navy from 1994 to 1998.

Walid talked about the intersectionality of being an African American and a Muslim.

“We’re seeing some of the stellar people in the community in these pictures and the data,” Walid said about the presentation. “Also, know that about 40 percent of Muslims live at the poverty level. American Muslims are struggling with the same issues that other Michiganians or Michiganders are dealing with.”

Some of the issues Walid mentioned included healthcare, concerns about being laid-off, outsourcing of jobs and the opioid epidemic.

During the question and answer session, an attendee asked about the types of coalition building the panelists were involved in.

Hai said that six years ago he invited a neighbor priest over for tea, and after their conversation a Plymouth-Canton interfaith group formed to do charitable projects for the community.

Another attendee asked, “What is sharia law?”

Walid said “sharia” is the path to faithfulness and that the words “sharia” and “law” shouldn’t be used together.

The same attendee asked if it was true that Muslims are supposed to follow the laws of the land they live in.

Walid said Muslims who live in a non-Muslim country are to respect the laws of the country they live in, but also that “sharia” is not a one-dimensional set of laws that can be defined as such.

Once the event was over the space was open for people to view the portraits along the walls and to discuss the presentation with others.

Kiki Farrow, a member of the First Presbyterian Church of Plymouth, said she and her friends actively work together with local Muslim and Sikh women. Together, they have done community projects and have partnered with local organizations as well, such as First Step, a non profit agency providing comprehensive services for victims of domestic and sexual violence.

Attendee Nancy Sullivan said the MAP project’s mention of religious illiteracy is a key point and something she’s worked on with her church community.

“It’s one of the things that we’ve had to work on within our church,” Sullivan said. “As we’ve reached out to the women of the mosque, there was some misinterpretation of what we were doing. And as women, we persisted.” The Muslims for American Progress presentation disseminated data on the contributions of Michigan Muslims to the state.

Sullivan also said she’s been part of joint projects with women from the Muslim community.

“When you are side by side degreasing an oven or painting a wall or laying floor, it does not matter,” Sullivan said. “The more opportunities we have to move beyond the surface is really helpful.”

“I will say that the mayor and the commission here really had a wakeup call with the ugly Facebook posting,” said Debra McGregor, a friend of Sullivan and Farrow. “They are really intentional right now about changing the culture right here and we want to support that.”

“The presentation and the panel discussion exceeded my expectations and was wonderfully received by those in attendance,” Dwyer told The AANews after the event. “I personally learned a lot about the Muslim experience and felt blessed to have been a part of the event.”

The mayor also said it was very nice to share an evening discussing the positive contributions that Muslim Americans make to our community.

“We already have residents who were in attendance asking if and when we will hold similar events for neighbors from other diverse backgrounds,” he said.