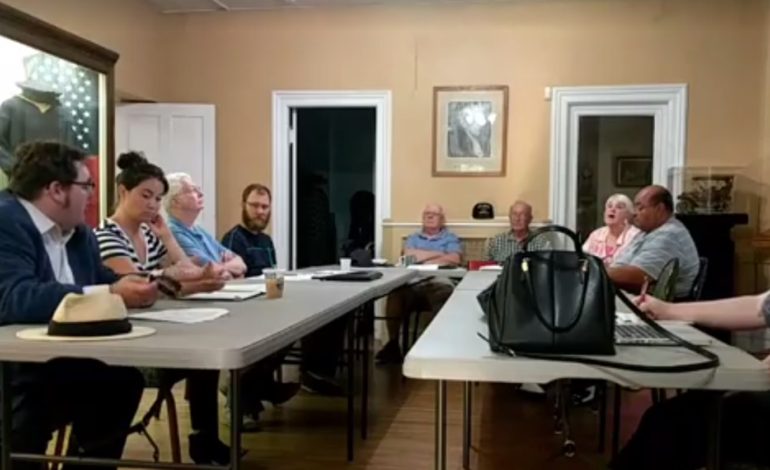 The Dearborn Historical Commission's Sept. 26 meeting - Photo by The AANews

DEARBORN — On the two-year anniversary of the removal of former Dearborn Mayor Orville Hubbard’s statue from City Hall, the city’s historical commission made a decision in hopes of putting the much-debated issue to rest.

However, it didn’t come without some contention among museum administrators. On Sept. 26 at the Dearborn Historical Museum, where Hubbard’s smiling statue greets visitors at the entrance, historical commissioners, residents and concerned youth participated in a passionate discussion regarding the placement and ownership of the statue, as well as the installation of a descriptive write-up.

Museum Curator Jake Tate announced, with a letter from the city’s legal department in his hand, that the Hubbard family has given ownership of the statue to the city and the Dearborn Historical Society. He said they had 30 days to include a descriptive plaque while it remains outside. If a millage on next year’s ballot passes, it would allow for renovation of the museum and make room for the statue to be displayed inside. Renovations would take about two years to complete.

The statue was originally placed in front of the former Dearborn City Hall in 1989, but was removed and placed in storage after the City Hall building was sold in 2015. It was quietly erected again in April on the Dearborn Historical Museum’s front yard, and later moved to the side yard.

Residents and civil rights organizations had requested removing the monument, amid national upheaval about racist symbols like the Confederate flag. Hubbard, mayor from 1942 to 1978, was a vocal proponent of racial segregation.

A handful of college students and commissioners at the meeting were worried it would take too long until the statue would be relegated from a glorifying tribute to a historical artifact.

Residents and some museum curators took issue with Susan Hubbard, the mayor’s granddaughter, being able to decide or approve what would be included in the text.

But L. Glenn O’Kray, vice chairman of the historical commission, said Hubbard did not take issue with illustrating her grandfather’s segregationist views on the plaque.

Lea, Mike and Jordan, all University of Michigan-Dearborn students, told the board they wanted to ensure the city was accountable for its image and that museum places the statue in an accurate historical context and “in the most immediate sense.”

“I don’t necessary believe that its necessarily appropriate for a donor to be able to decide what’s written,” Jordan said. “It’s really strange considering the contentious history of this mayor.”

Assistant Curator Andrew Kercher said he prefers the write-up remain an internal museum affair. He added that the text was already approved by the commission in 2015.

Kercher said the museum had —almost deliberately— “kicked this can down the road” for months for minor tweaks, while other donors are not allowed to write the label for artifacts.

“I am distraught every single day that we have no label on this artifact that’s outside and clearly the most interesting thing we have at the museum recently,” Kercher said.

He added that it would take about two weeks to make the plaque and that the museum might exceed the 30 days to post it if Susan Hubbard recommended another tweak.

Tate countered that sentiment, saying he hopes they could agree to “extend her the courtesy” and that he didn’t want to “sour the water” while the ordeal was nearing its end.

Other elderly meeting participants and Arab American Historical Commissioner Mohamed Sion, who said they’d witnessed Dearborn under Hubbard’s administration, argued with the students over the statue’s intended representation, the common conception over what Hubbard’s “Keep Dearborn Clean” campaign actually meant and whether he could have enacted policies to segregate Whites and Blacks.

Sion asserted that while controversial symbols of racism around the country deserve to be taken down, continual removal of statues would be like erasing history.

At the meeting’s end, the commission passed a motion to present Susan Hubbard with a draft of the descriptive plaque and allow for a response until a final decision is made at its meeting next month.

The statue included a plaque that still remains at City Hall, but which side-stepped the issue of race, said David Good, Hubbard’s biographer and a historical commissioner.

He read the proposed text of the planned label:

“Orville L. Hubbard — 1903-1982 — was mayor of Dearborn 15 terms from 1942 to 1978, one of the longest tenures of any full-time U.S. mayor. Born near Union City, Michigan, Hubbard served in the Marine Corps from 1922 to 1925 and graduated from the Detroit College of Law. Settling in Dearborn, he ran unsuccessfully for public office nine times before becoming mayor.

“Sometime labeled a ‘political boss,’ Hubbard was a powerful, controversial figure who won re-election by landslide margins despite a libel judgment, a recall attempt, a grand jury investigation, a governor’s removal hearing and a federal civil rights conspiracy trial.

“Largely because of disproportionately high property taxes levied against Ford Motor Company and other businesses, he was able to keep homeowners’ taxes low, while still providing what he called ‘the world’s best public service’ while creating Dearborn’s signature facilities, well maintained parks and schools, Camp Dearborn, the Henry Ford Centennial Library and housing for seniors in Dearborn as well as a Florida apartment building.”