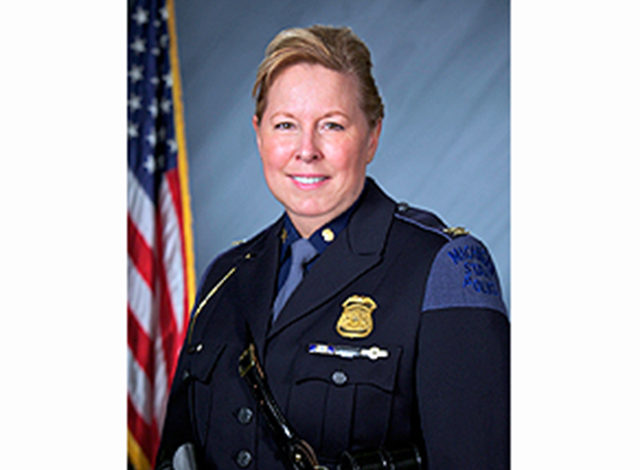 LANSING — Colonel Kriste Kibbey Etue, director of the Michigan State Police, has apologized for a Sept. 24 Facebook post that disparaged athletes kneeling during the national anthem.

On her personal Facebook page, Etue wrote, “Dear NFL: We will not support millionaire ingrates who hate America and disrespect our Armed Forces and Veterans. Who wins a football game has ZERO impact on our lives. Who fights for and defends our nation has EVERY impact on our lives. We stand with the Heroes, not a bunch of rich, entitled, arrogant, ungrateful, anti-American degenerates. Signed, We the People.”

The post came just days after President Trump said in a speech that the police brutality protesters are SOBs and that NFL players should be fired by their teams’ owners.

The timing of the post also comes at a time when the department is being protested over the death of 15-year-old Damon Grimes of Detroit.

The post was intended to be seen only by Etue’s friends on Facebook and was not posted publicly, according to Michigan State Police Public Affairs Director Shannon Banner.

U.S. Rep. John Conyers (D-Detroit) is among those who’ve called for Etue’s resignation or dismissal.

“Michigan needs a Michigan State Police director who understands the very real issue of racial injustice and the blatant disparities that African-Americans face within our criminal justice system and at the hands of some ill-willed law enforcement officers,” said Conyers, the ranking Democrat on the House Judiciary Committee. “Instead of bashing the protests, Etue should be looking to address the reason for the protests in the first place, by working with the Michigan police force and the communities they protect and serve to improve relations.”

In a joint statement, Detroit Mayor Mike Duggan and Wayne County Executive Warren Evans urged Gov. Snyder to take action. However, Anna Heaton, a spokeswoman for Snyder, told the Free Press in an E-Mail that Snyder won’t be asking for Etue’s resignation.