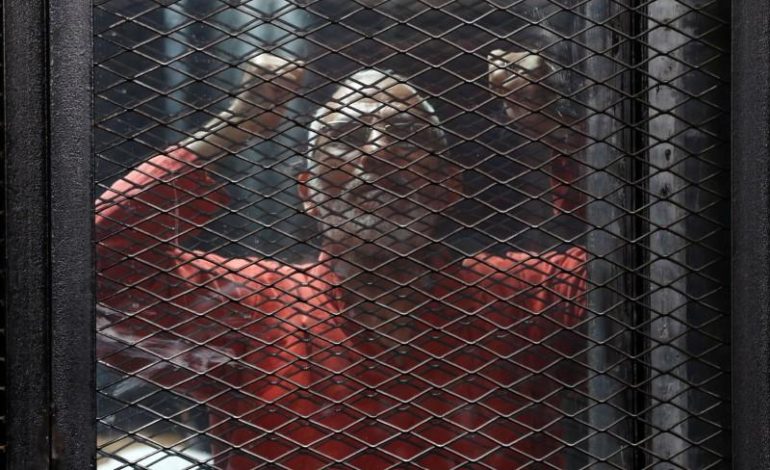 Muslim Brotherhood's leader Mohamed Badie shouts slogans against the Interior Ministry behind bars during the trial of 738 brotherhood members for their armed sit-in at Rabaa square, at a court on the outskirts of Cairo, Egypt May 31, 2016. REUTERS

CAIRO ― An Egyptian court sentenced top Muslim Brotherhood leader Mohamed Badie to another life term in prison on Thursday in the latest example of a crackdown against Islamists since the army overthrew President Mohamed Mursi.

The sentence relates to violence that broke out in 2013 after the army toppled Mursi in the wake of mass demonstrations against him. General Abdel Fattah al-Sisi led the military at that time and was elected president the following year.

Authorities outlawed the Brotherhood after Mursi was ousted and arrested thousands of its supporters. They also dissolved its Freedom and Justice Party, which Mursi led. Mass life and death sentences have been common since then in what rights groups call an unprecedented crackdown.

Those sentenced were charged with inciting terrorism, leading an outlawed group, raiding and vandalizing government facilities among other crimes related to clashes in Beni Suef, south of Egypt in August 2013.

Those sentenced on Thursday included former members of parliament and members of the Freedom and Justice Party.

Badie was sentenced to life in jail in 2014 after being convicted of murder and inciting violence during clashes that took place during the same period.

The world is changing: China launches campaign for superpower status