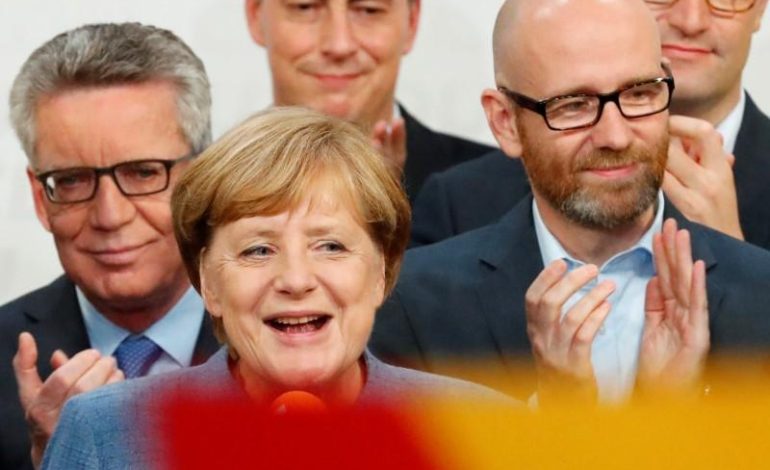 BERLIN ― German Chancellor Angela Merkel won a fourth term in office on Sunday but Europe’s most powerful leader will have to govern with a far less stable coalition in a fractured parliament after her conservatives poured support to a surging far right.

Two years after Merkel left German borders open to more than 1 million migrants, the anti-immigration Alternative for Germany (AfD) stunned the establishment by becoming the first far-right party to enter parliament in more than half a century.

The AfD won 13 percent of the vote – more than expected and one of many shocks on a night of drama that saw Merkel’s conservatives get their worst result since 1949, and her main Social Democrat (SPD) rivals their worst since 1933.

Describing the far right’s success as a test for Germans, Merkel insisted she had a mandate to govern – a formidable challenge as she has little choice but to cobble together a three-way coalition with a pro-business group and the Greens.

But she added: “We are the strongest party, we have the mandate to build the next government – and there cannot be a coalition government built against us.”

After shock election results last year, from Britain’s vote to leave the EU to the election of President Trump, leaders of Europe’s establishment have looked to Merkel to rally the liberal Western order.

A pastor’s daughter who grew up in Communist East Germany, she has acted as an anchor of stability in Europe and beyond. Now, she faces an unstable situation at home as she must form a coalition, an arduous process that could take months.