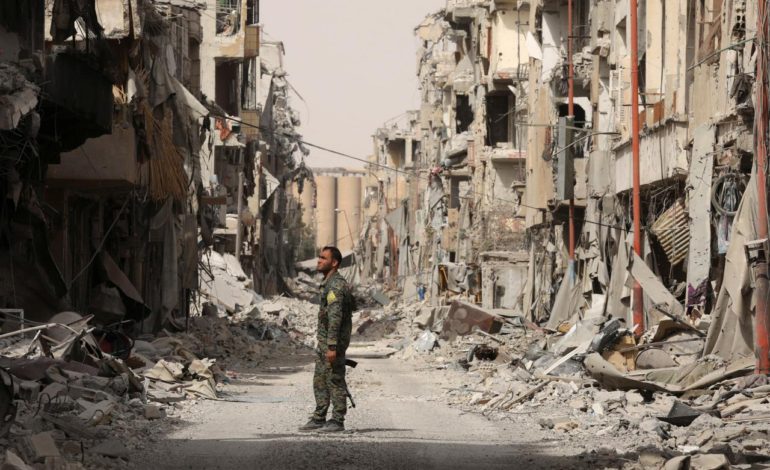 A fighter from Syrian Democratic Forces (SDF) stands next to debris of damaged buildings in Raqqa, Syria September 25. REUTERS

RAQQA ― U.S.-backed militias expect to push all ISIS fighters out of their former Syrian headquarters of Raqqa in less than a month, a Kurdish commander told Reuters on Monday.

Under the banner of the Syrian Democratic Forces (SDF), the militias have hemmed the jihadists into a few districts in the north of the city.

The Kurdish and Arab militias pushed into the city in June after fighting for months to encircle it with the help of U.S.-led jets and special forces.

”As the noose tightens, the reaction of Daesh gets fiercer,“ said Jihan Sheikh Ahmed, spokeswoman for the Raqqa offensive, using the Arabic acronym for ISIS. ”In the coming days, the battles will be at their most intense…

“We expect, under our plan, that we will be able to liberate Raqqa in less than a month.”

ISIS has lost much of its territory in Syria this year under separate offensives by the SDF and the Russia-backed Syrian military. Its fighters have fallen back to its last major footholds, the cities and towns in the fertile strip along the Euphrates river downstream of Raqqa.

The SDF said last week that, after seizing 80 percent of Raqqa, the battle for the city had entered its final stages.

The “caliphate” that ISIS declared in 2014, spanning both countries, lost its de-facto Iraqi capital of Mosul in July when Iraqi forces took the city.

Zarif: Military strike against Iran by Saudi Arabia or U.S. will result in “all-out war”