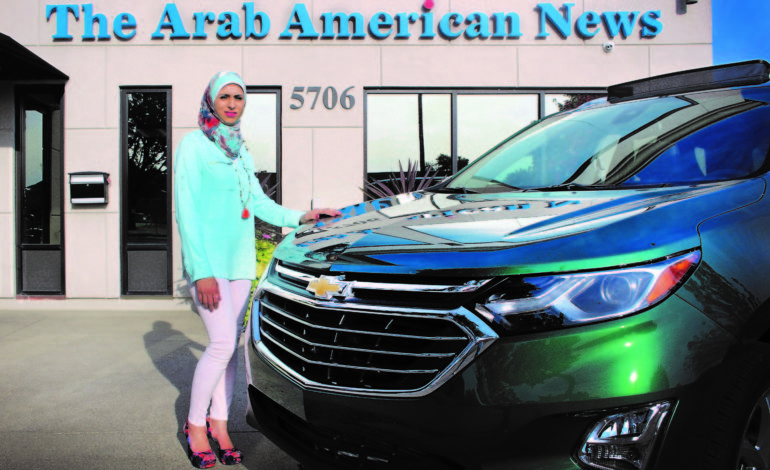 DEARBORN ― Earlier this month, The AANews partnered with GM on a Middle Eastern pastry tour in Metro Detroit― where reporters were given a new 2018 Chevrolet Equinox to drive for two days.

The Ivory Metallic truck first stopped at Bateel, well-known for its gourmet dates and chocolates, found in many destinations and airports from London to Jakarta. The store newly opened in Birmingham this year and is the first established in the U.S. A neat fact about this boutique’s name is that Bateel actually means palm shoot in Arabic.

After tasting the delicious treats, reporters then arrived at Sweet Dreams Pastry and Ice Cream in Warren, where they met with owner Samir Daher. The bakery is a family business that started back in Beirut and transitioned with him and his brother to the U.S. in 1991.

“We do everything from scratch,” he said. “If I can eat it and if my kids can eat it, then I can sell it. That’s my philosophy.”

Sweet Dreams specializes in wedding cakes and any other occasion cakes from birthdays to graduations.

Vice president Nada Shatila shared with The AANews a variety of Middle Eastern sweets, from Kunafa to their famous baklava.

Reporters were surprised with the wonderful taste of their sugar-free baklava.

As for Cannoli Pastry, owner Chuck Chemeissani said the shop opened in West Dearborn early this year and offers French, Italian and German delicacies using techniques he learned from watching his parents bake in Lebanon.

“I bring European recipes and add american flavors,” he said. “Its all my own recipes.”

The Equinox reporters drove in on the tour includes premium safety features, like cameras and sensors surrounding the vehicle that assist drivers when backing up and parking, as well as blind-spot warnings.

Driving the car throughout the two-day tour went smoothly, thanks to small additions like a charging pad that charges phones wirelessly and an 8-inch touch display that connects to a driver’s phone, compatible with Apple Car and Android Auto.