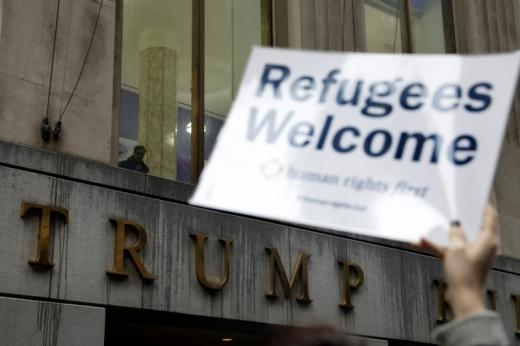 Protesters gather outside the Trump Building in New York on Sept. 11

WASHINGTON/NEW YORK—The Trump administration on Wednesday proposed admitting a maximum of 45,000 refugees next year, the lowest cap in decades, which officials said was necessary to ensure U.S. security, although Democrats and humanitarian groups blasted the decision as an abandonment of American moral authority.

That figure is the lowest cap since the modern U.S. refugee admissions system was established in 1980, and the administration’s decision was harshly criticized by refugee advocates who say it ignores growing humanitarian crises around the world. The report also projects slashing funding to the refugee resettlement program by 25 percent.

An anonymous U.S. official said the security and safety of the American people the chief concern for making this decision.

The proposed refugee limit represents a cut of more than half from the refugee ceiling set last year by former President Barack Obama.

Many national security experts argue that refugees do not present a danger to the United States because they are already among the most highly vetted immigrants to gain admittance to the United States, going through a grueling process that takes 18 to 24 months on average.

The Wednesday report said that at the end of 2016, the estimated refugee population worldwide reached 22.5 million, an increase of 1.1 million in just one year.

Administration officials said one reasons for the lower cap is that Department of Homeland Security staff are being re-directed to deal with a growing backlog of cases of people already in the United States and seeking asylum for fear of persecution which includes nearly 300,000 pending asylum applications.

Officials warned that the final number of refugees allowed to come into the United States next year will depend on DHS’ “interviewing capacity.”

Immigration law requires the administration to submit the refugee report to Congress before the start of each fiscal year, and then consult with top members of relevant committees prior to the start of the fiscal year on Oct. 1.