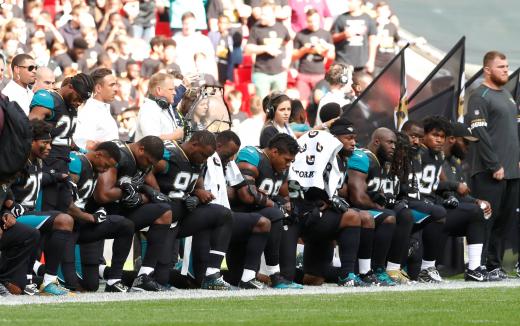 NFL players lock arms and kneel during the national anthem

U.S. President Donald Trump ramped up his fight with the National Football League (NFL) on Tuesday, calling on the league to ban players from kneeling in protest at games while the national anthem is played.

“The NFL has all sorts of rules and regulations. The only way out for them is to set a rule that you can’t kneel during our National Anthem!” Trump wrote on Twitter.

For the fifth straight day the president denounced the symbolic gesture, which has been adopted by some NFL players in the last year to protest against racial disparities in the criminal justice system.

An NFL spokesman did not respond to requests for comment.

Trump praised two teams that played on Monday night and largely steered clear of the controversy. The Arizona Cardinals linked arms and stood for the “Star-Spangled Banner” along with the Dallas Cowboys, who knelt before the song.

Last Friday, Trump told a political rally any protesting player was a “son of a bitch” who should be fired, and urged a boycott of NFL games, triggering protests by dozens of players, coaches and some owners before Sunday’s games.

Paul Ryan, the most senior Republican in the U.S. House of Representatives, said he also disapproved of the gesture.

Hillary Clinton called Trump’s comments “a huge, loud dog whistle to his supporters” in an interview with CBS.

In an exclusive Reuters/Ipsos opinion poll released on Tuesday, it was found that 57 percent of adults do not think the National Football League should fire players who kneel. This included 61 percent of NFL fans who watch at least a few games per season.

His former teammate Eric Reid wrote in a New York Times opinion article that he and Kaepernick chose to kneel as a “respectful” gesture, comparing it to “a flag flown at half-mast to mark a tragedy.”