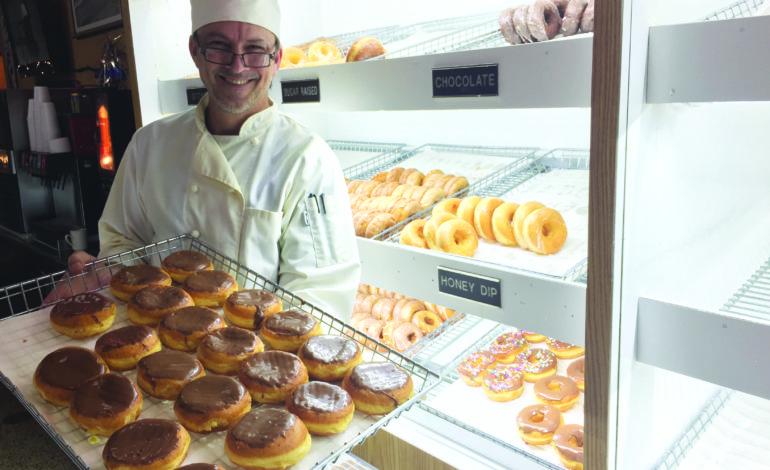 Mark Porada in the shop/ Photo by The AANews

DEARBORN — For the past 51 years, a popular local donut shop and coffee bar has been witness to the cultural changes that swept the city.

Located on Ford Road, a few miles east of the Southfield Freeway, Donutville, which has been in business since July 4, 1966, has served as a gathering place for residents of various races, creeds and religious beliefs. They’ve come to Donutville, which is open 24 hours, and talked politics, religion and the general news of the day, according to owner Mark Porada. Customers can be heard discussing any topic, ranging from important issues, such as the mass shooting in Las Vegas, to a critique of a contestant on “The Voice.”

Porada’s father, Al, a retired Dearborn policeman, opened Donutville in 1966 with a fellow officer after coming up with the idea inside a Dunkin Donuts on break together in the 1950s. During that first year, Ford Road was being widened and was completely closed, so the senior Porada and his partner almost went bankrupt. Porada said that finances were so strapped that his mother worked the counter while pregnant with him.

“My dad worked eight hours in the squad car,” Porada told The AANews. “Then he would go work eight hours baking, then go sleep for the other eight.”

The two officers did not know how to bake, so Al Porada attended a Mr. Donut seminar in Wisconsin for two weeks to learn how to bake a great donut. He returned with the new cooking methods, the donut shop survived and has been able to prosper during the ever-changing times over the last five decades. Porada said he goes to the Arabic bakeries around town all the time to get cakes and other beautiful, intricate pastries, and that he loves them. He said he doesn’t see donuts in most of those bakeries, and for that reason he thinks there is less competition between the different establishments.

“At least 80 percent, maybe 85 percent,” Porada said of the percentage of Arab American customers that frequent his establishment. “Everybody loves donuts.”

He also said that during Ramadan, “When they break fast and it gets dark at night, it is jammed in here. This last time we sold out every night.”

Porada said that his father got the idea of the architecture of the building from the Howard Johnson Hotels chain. The original building is still standing, but had a new roof put on this year.

“Donutville has seen 10 presidents,” Porada told The AANews. “People yell about this president and that president; Donutville doesn’t care. Donutville cares about its donuts.”

He also said Donutville cuts through the decades like a hot knife through butter.

“It doesn’t care about politics or religion,” he said. “Although those discussions happen in here, Donutville doesn’t take a political or religious stance. It just adapts. Any demographic that your mind can dream up, Donutville has it.”

Porada, who grew up on the west side of Dearborn and graduated from Dearborn High in 1985, started working in the donut shop at 13-years-old in 1980, later taking over after his father stepped down in 2000. Al Porada, now 86, retired from the Dearborn police in 1974 after 20 years of service.

Dr. Leon Isagholian has been patronizing Donutville since 1975. He said back then there weren’t many Arab Americans customers. Most were Polish or Italian Americans, but over the last 10 years or so, Donutville has become very popular in the Arab American community.

Isagholian immigrated to Dearborn Heights from Armenia in 1955, at the age of 17. When he began to visit the donut shop he said he came to read the paper (when they would write something about him), talk politics— local and international— and general business in the community. He said judges would come in from the Dearborn District Court and that the mayor would stop in, too.

Sal Abdullah has been a customer for 15 years. He said the donuts are great and that Donutville is the best place in town.

Nasrl Hussein said he’s been coming to Donutville for more than 20 years and that he eats there about once a week. He also said he comes back for the “good quality treat.”

He said the lemon jelly filled donut is his favorite.

“This shop has become a part of our society, it’s part of Dearborn,” he said.

Porada said the busiest time of the day changes throughout the year and sometimes he can’t make enough donuts.