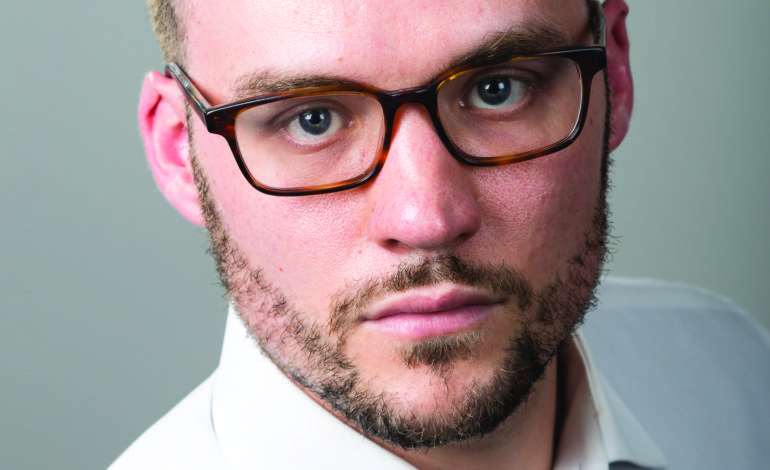 DEARBORN — A U of M-Dearborn campus officer approached him outside an event hall and began aggressively and suspiciously questioning why he, a White American, was outside a majority-Arab and Muslim event.

“I had just gotten a haircut, so I looked like a fresh Nazi,” he said. “I had a camo shirt and I was pacing outside of this Arab-majority show.”

The officer asked what was in his backpack.

“I said, jokes,” comedian Jeremy McLellan said. “Not something you say to an officer.”

Lucky for McLellan, event guests walked by and the officer eased up when they greeted him.

“I just liked that Dearborn was the only city in the U.S. where White people could get racially profiled as terrorists,” McLellan said.

McLellan, a native of Charleston, South Carolina, is a comedian who includes political, religious and hot button issues in his stand-up routine. He’s appeared in venues around the country, as well as in Pakistan, and will be doing shows in the U.K. this winter.

Four years ago, he started doing stand-up around Charleston, and once he created an online presence he went viral in Arab, Pakistani and Muslim communities.

Stuff that I’m talking about is stuff that I’ve always talked about. People who have always known me don’t find my opinions weird. They’re just like, ‘that’s Jeremy.’

McLellan’s twitter profile says, in jest, that he is a “biryani extremist” and an alleged member of the “Muslim Cousinhood.”

Prior to doing stand-up, McLellan worked in the human rights field, training caregivers on how to deescalate violent situations and how to prevent challenges like abuse and neglect.

He worked with people with intellectual disabilities before he was involved with human rights work. While working in that profession nearly seven years ago, a Pakistani Muslim client served as McLellan’s first introduction to Muslim and Pakistani cultures.

He said that despite going viral in the aforementioned communities, he was already talking about issues such as immigration and foreign policy in his routine.

“Stuff that I’m talking about is stuff that I’ve always talked about,” McLellan said. “People who have always known me don’t find my opinions weird. They’re just like, ‘that’s Jeremy.'”

Though McLellan is not Muslim, he’d become accustomed to being asked if he was until he became more famous. Now, he sometimes encounters people trying to convert him to Islam.

“It’s fine,” McLellan said. “I think it’s a reasonable thing to try and convert people. I don’t think it’s rude. But it is kind of a funny thing that happens sometimes.”

This past summer McLellan went with his friend’s dental team to Pakistan, where free care was provided to people in villages during the day and McLellan performed sold-out shows at night at universities and well-known Pakistani venues.

There are similarities between McLellan’s shows in the U.S. and Pakistan.

He said he didn’t change his act much for his shows overseas and that his routine was well-received.

Before going, he’d attended the “Just for Laughs” festival in Montreal. When he told festival colleagues that he’d be embarking on a trip to Pakistan, he received mixed responses.

“‘How are you going to tell if the women are laughing,'” said one person whom he felt was ignorant about Pakistani culture. “This is a Hollywood person who is supposed to know this stuff.”

McLellan said some people assumed the only reason he would be going overseas was to do shows for American troops despite there being no active U.S. military bases in Pakistan.

He said that during his Pakistan trip he observed generational households and extended family members who visit and see one another almost daily.

He and his siblings all live in different cities.

“I described my family to some people,” McLellan said. “And they were like, ‘Whoa! What happened to your family, your family is falling apart.”

He also said he has always felt a responsibility to speak truth to power, but that feeling has deepened.

“I have a very big platform now, and I say what I think is true,” he said.

He shared a video on social media filmed by a friend who happens to be a Muslim woman. The video, filmed at a Trader Joe’s, shows a shopper saying aggressive things to both McLellan’s friend and another Muslim woman, who were in line. The person’s comments included such comments as, “I wish they didn’t let you in the country” and “Obama isn’t in office anymore, we don’t have a Muslim in there anymore.”

The video can be seen at www.facebook/TheAANews.

After the Trader Joe’s video went viral, McLellan received criticism from Pam Geller, who is known for her anti-Islamic views. Geller publicly accused him of being supported and funded by the Muslim Brotherhood “comedy circuit”, which does not exist.

“She was not only accusing me of that,” McLellan said. “But she also thinks that the Muslim Brotherhood has a comedy circuit. But I guarantee you that 99.9 percent of people reading that are like ‘they do have a comedy circuit and they’re out there!'”

McLellan also said that after doing a show for the Los Angeles chapter of the Council for American-Islamic Relations (CAIR), Geller tweeted that he was doing comedy for “terrorists.”

But he’s not concerned about hatred that comes his way from conservative circles or anti-Islamic groups.

“It’s like its own ecosystem,” he said. “I don’t care about my reputation in those circles.”

He said he recognizes the importance of dispelling myths that come from negative media attention, but as a public figure he doesn’t have a specific plan of action.

He compared this observation to when he last went camping in the Canadian Rockies in Alberta, Canada and campers weren’t allowed to make campfires.

“The conditions were ripe for a forest fire,” McLellan said. He said a camper would simply need one spark to start a forest fire.”

“That’s how I see America is right now,” he said. “If the Las Vegas shooter was Muslim, I don’t even know what would have happened. But all the pieces are there, and we hope that nobody starts a fire.”

McLellan will be performing at Wayne Tree Manor in Wayne on October 7 for an Islamic Circle of North America Relief (ICNA) fundraiser. The event will also feature comedian Azhar Usman. Proceeds will go toward refugee programs. For ticket and event information, visit www.icnarelief.org.