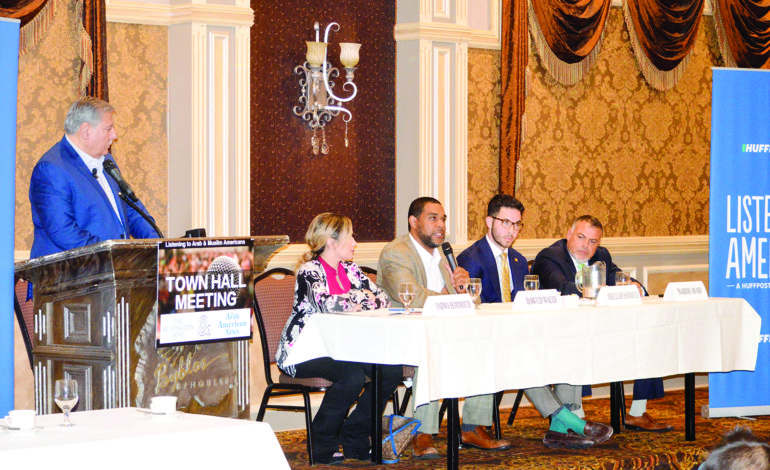 DEARBORN — East coast media outlets have been accused of being out of touch with middle America, so The Huffington Post embarked on a multi-city bus tour on September 12 titled “Listen to America.”
In each city, HuffPost partnered with a news organization to host an event so that it could record stories from local residents.

The Arab American News was its partner in Metro Detroit and the paper hosted a well-attended town hall meeting on Tuesday, October 3 in Dearborn. Community members at the joint town hall meeting with the HuffPost

The AANews Publisher Osama Siblani served as event moderator. He asked questions of each of the panelists, and after they answered he went around the room to let participants speak about their experiences living in Metro Detroit post-9/11 as a Muslim or an Arab.

Fadwa Hammoud said she grew up going to Dearborn schools. She spoke about how different it is now for Muslim children going to school.
“Our students are constantly on the defensive,” she said. “They have to answer for the actions of a few extremists.”
Walid, a Navy veteran, said that agents and law enforcement officials who conduct actions regarding the terror watchlist are following orders in a chain of command due to policies that are set at the highest echelons of the American government.

Rep. Hammoud was asked to discuss what he can do regarding the watchlists as a state representative.

He said many in the State House are unwilling to form a coalition, making it very difficult to draft a resolution.

Ayad talked about cases he is working on regarding the watchlists and said the only way a person can be removed from any list is by filing a lawsuit against the federal government. He said it is unfortunate because not everyone has the resources to do so.

Numerous attendees shared stories about facing hatred, bigotry and even inconveniences and harassment at ports of entry, such as airports and border crossings. But there were also stories of triumph in the face of adversity.

Michio Assi, a recent graduate of the University of Michigan-Dearborn, said she was discouraged from joining campus organizations because of her “thick accent.” Despite what she was told, she went on to become the president of a prestigious campus organization. She was also a public speaker at numerous events in the last year.

One woman shared a story about how her son asked if Donald Trump would kick all Muslims and Arabs out of the country if he became president, and how she responded to him.

Wali Tahif, a local Yemeni American activist, talked about how people are dying from extreme conditions overseas and about how Yemeni American have faced discrimination when trying to reunite with their family for many years, because of the conflict.

Bill Bazzi, a former U.S. Marine, told a story about being on a military base overseas after 9/11. A woman there approached him and said to be on the lookout for “Muslim terrorists.” He asked her what a “Muslim terrorist” looked like and she replied, “Like an Arab.”

Sheikh Hassan Habhab said that one time he was on a plane he used the restroom multiple times. For this, he was accused of suspicious behavior and questioned extensively by the TSA. The next time he flew he refrained from using the restroom during the entire six hour flight.

Dearborn resident Mohamed Al Ziyadi spoke about systematic racism and gender inequality. He said it’s vital for everyone to stop being colorblind, to show up to causes other than their own and to celebrate differences.

The event was comprised of professionals, elected officials, religious leaders, students and other community members, who either wanted to share their personal stories or were curious to learn what others had to say.

The livestream for the event is available at www.facebook.com/listentoamerica or on www.facebook/TheAANews. The video had generated more than 80 thousands views by press time.

A detailed story authored jointly by HuffPost writers Rowaida Abdelaziz and Christopher Mathias with The AANews writers Hassan Khalifeh and Afaf Humayun, about the so called “Terror Watchlist” and how it is affecting local Muslim and Arab Americans, has been published on both websites: www.huffpost.com and www.arabamericannews.com.