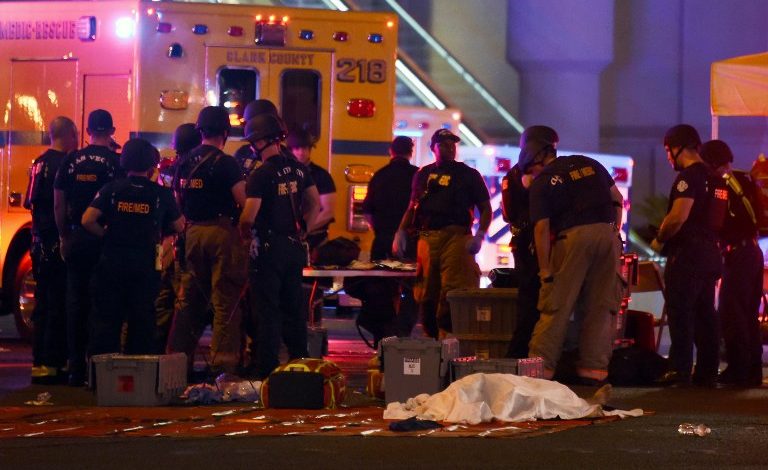 On Sunday night, Oct. 1, a White terrorist named Stephen Paddock, sadly not branded as such by the president, police or media outlets, shot more than 500 people and killed 59 at a country music concert from his 32nd floor suite of the Mandalay Bay Hotel on the Las Vegas Strip.

According to police, Paddock, 64, had 23 guns in his hotel room, 1,600 rounds of ammunition in his car and 19 firearms and explosives at his Mesquite, Nevada home. He reportedly had been collecting weapons for decades.

Police called it the deadliest attack in contemporary American history, but still Las Vegas Sheriff Joe Lombardo called Paddock a “local individual” and a “lone wolf”— instantly declining any links to terrorism. He also said they didn’t know, “what his belief system was at this time.”

Also on Monday, President Trump called it “an act of pure evil.”

Therefore, they shamefully concluded that Paddock gathered weapons and killed people with no motive, whatsoever. White privilege, anyone?

It seems like we need to constantly reiterate the definition of terrorism, question why self-proclaimed Muslim or Arab attackers are quickly labeled terrorists and why entire religious and ethnic groups are condemned— a basic reminder of this country’s oppressive double standards.

According to an NPR article called “What Is, And Isn’t, Considered Domestic Terrorism”, the Patriot Act says that to be called a domestic terrorist, an individual must “intimidate or coerce a civilian population; to influence the policy of a government by intimidation or coercion or to affect the conduct of a government by mass destruction, assassination or kidnapping.”

Apparently, the only way to be charged with terrorism is if you’re suspected of acting on behalf of one of almost 60 groups affirmed as foreign terrorist organizations by the State Department.

“A person who carries out a mass attack and survives can face a range of charges, but unless the person is linked to one of the banned groups, a federal terrorism charge won’t be one of them,” the article said.

During the Charlottesville, Virginia clashes, White American terrorist James Alex Fields drove his car into a crowd and killed a female counter-protester. But, he only faced murder charges — not terrorism — even though his motive and political agenda were crystal clear.

“Dylann Roof has been convicted of and sentenced to death for a host of federal and state crimes in the shooting deaths of nine African Americans at a Charleston, S.C., church in 2015,” the article said. “He said he wanted to start a race war. But terrorism wasn’t among the many charges.”

When the Orlando shooter, an Afghani American named Omar Mateen, killed 49 people at a gay nightclub, he was quickly called a terrorist and was linked to ISIS by conservatives— even though U.S. authorities could not find any connection between him and ISIS.

He expressed allegiance to the terrorist organization, according to police. And ISIS falsely claimed it, just as it did with Paddock. But, of course, the claim wasn’t taken seriously when it came to Paddock, the White man.

Only Muslims and Arabs have to pray the president, the media and police don’t link a terrorist’s act to them in any way, while Whites wake up unfazed. For them, only the individual is responsible, not an entire ethnicity or religion.

As Shaun King wrote on Tuesday in a column for The Intercept entitled, “The White Privilege of the ‘Lone Wolf’ Shooter”, when an African American commits an act of violence, “racist tropes follow — and eventually, the criminalization and dehumanization of an entire ethnic group.”

To put it simply, terrorism is sadly considered foreign to White America’s “lone wolves” and only foreigners are terrorists to America.