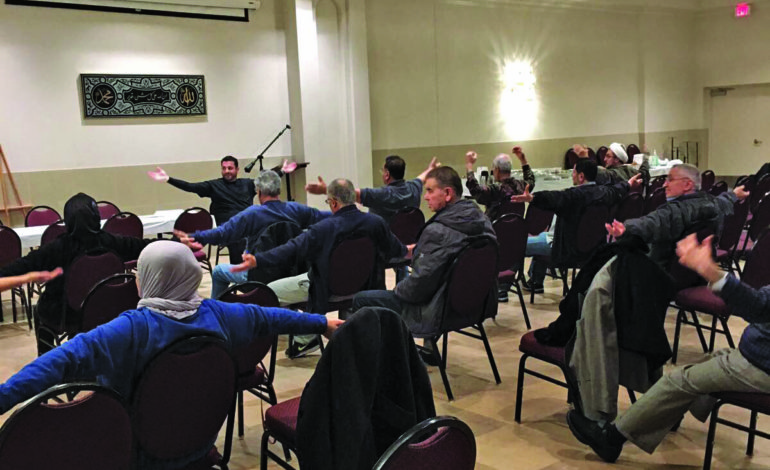 Elders exercising during a physical therapy session- Courtesy of the ICA

DEARBORN— The Islamic Center of America kicked off its senior program again in partnership with ACCESS on Oct. 10, after a summer break due to the holy month of Ramadan and family related events.

The program, designed to benefit Arab and Muslim American seniors in Dearborn, was established in January. Approximately seven people enrolled at the time, with the number later increasing to 30.

However, only about 10 attended on Tuesday because not many people knew that it was starting up again.

“We wanted to do the senior program for older adults to have something to do instead of just sitting home, especially in the winter months when it gets cold out,” Jawad told The AANews. “We wanted them to socialize and meet other people, learn new things, do some kind of activities, whether its exercise or playing games.”

Beneficial activities and lectures for the mind, body and soul

In the lecture hall, other than learning about health insurance, nutrition and moving their bones and muscles, the seniors enjoyed a wheel of fortune game based on religious questions about Ashura and won prizes. With just one look or one listen in onto their spirited dialogues, hearty laughter and interviews, one can sense bliss adorning the room.

Kassem Khalil, a participant, said he truly enjoys how the program allows room for discussion and enlightens minds by educating him and others on new topics that hadn’t been brought to their attention before.

“When you just sit and zone out, you become depressed,” he said. “But if you read a magazine or newspaper, it brightens your mind and mood, and this program does the same.”

Samar Almomen added that the diversity it offers broadens her knowledge and keeps her interested. Another participant named Hassan El Zayat described the program as informative and a special way to meet new friends.

Jawad said a local health insurance specialist, nutritionist, physical therapist and coach all volunteer their time to teach seniors something new every week and enliven the program. She added that ACCESS really liked what the Islamic Center was doing, so they partnered — assisting in organizing activities and sending many speakers to address stigmas in the community.

“They’ve talked about mental health issues like depression, drug abuse and how the seniors could watch for their grandchildren,” she said, adding that they’re basically now learning about all the taboo topics they couldn’t have discussed in the past and are no longer reluctant to ask questions.

Sheikh Ibrahim Kazerooni of the ICA also sits in on the program regularly, answering any Islamic-related questions participants may have, and playing a major role in the discussions, especially during the Quran challenge and similar games.

“Everyone has a good time,” Jawad said. “And they get heated… they even ask questions for their children pertaining to marriage and divorce.”

“We want them to get out of their houses, see people, communicate with others and make friends,” Kadouh said. “And, when you see them happy, that is worth everything.”

Next Tuesday, the program will include a field trip to a nearby cider mill.

Kazerooni said the need for an informal program that lasts for an hour and a half to two hours to break the “monotonous lifestyle” elders live started with the senior program at the ICA. He credited Jawad for the hard work she’s put in to benefit them mentally, emotionally and physically.

As for those who put parents or grandparents in nursing homes, he said it’s either due to ruined morals nowadays or unforeseen situations.

“Unfortunately, living in the West has eroded some of the moral values that were in the traditional family structure,” Kazerooni said. “The extended family literally centered on the elders… They became the pillars of the family structure and held everything together.”

Kazerooni said the act of putting one’s father, mother or grandparents in a nursing home because “a materialistically structured lifestyle doesn’t permit [them] to look after [their] parents” and rarely visiting them are two tragedies.

He said Muslims are obligated to take care of their parents, but it is not prohibited if there’s a “force of circumstance.”

“Bearing those unique exceptions in mind, I don’t think there is a categorical yes or no from a juristic point of view,” he said.

However, he said the inability to meet their needs does not reduce that person’s religious and moral duty.

“You still have the same obligation to go and sit with them on a regular basis,” he said.

Kazerooni said there’s a “need” for a Muslim nursing home, just as there was a need for a Muslim foster home now in the works, and that he’s discussed the issue with Jawad.

“[The nursing home] has to be structured within the community,” he said. “Not in the general rules that exist outside the community, where we as Muslims establish our own nursing homes that not only address the need, according to our cultural as well as juristic need, but also allows them to interact with the community more often…We should not forget these people spent their youth contributing for the betterment of society… what we have today is because of the work they did.”

Kazerooni said the economic and expertise factors are already available, but there must be a community will to start the project.

“I think it should be a long-term goal… It’s a big project to undertake…,” Jawad said. “I think everyone in the community should step up, not only financially… but [resource-wise] and healthcare professionals to help not as volunteers, but to work. It takes a lot to [complete].”