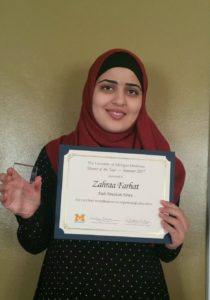 DEARBORN—Although she’s written nearly 100 articles during more than a year as a staff writer for The AANews, Zahraa Farhat never planned to be a journalist.

“I actually only minored in journalism, so becoming a reporter was never my ultimate goal,” Farhat said. “I earned my bachelor’s degree in English.”

In 2013, Farhat took a journalism class on memoir and travel writing at UM-Dearborn. She first gained confidence in her writing while in this class.

Two years later, an essay from this class won her first place in the campus writing awards.

“Even though my family, friends and professors had supported me, I thought I needed time to hone my skills and then share pieces,” Farhat said. “I realized that all I needed to do was first-off believe in myself, start somewhere and write and learn along the way, instead of holding back.”

Next, Farhat pushed herself to do an internship in writing and was hired to intern for The AANews in May 2016.

“The entire experience was wonderful and I found the field to allow room for creativity,” she said.

A few days after Farhat graduated in August 2016, The AANews Publisher Osama Siblani offered her a job at the paper.

For the past year or so, she’s also been mentoring current UM-Dearborn students.

On October 10, Farhat was presented with the “Mentor of the Year” award by the university’s humanities/history internship program.

“Zahraa was my student in two courses at the University of Michigan-Dearborn when she was an undergraduate here,” said Dr. Carolyn Kraus, a professor of journalism and the director of the internship program. “So I was already familiar with her impressive work and presence when she undertook an internship at The AANews in the program that I direct.”

Kraus said that when Farhat was a student intern through her program, she won an award for “Intern of the Year.”

“I was thrilled to learn that Zahraa would be drawing on her skills and experience to mentor students in the same University of Michigan-Dearborn program where she was once an intern,” Kraus said. “The facts can speak for themselves. I’ll only add that Zahraa is a warm and generous spirit. Mentor of the Year? No contest! Congratulations Zahraa.”

Farhat has grown to love many aspects of journalism, such as building rapport with interviewees, sharing their stories, doing research and dispelling misconceptions about her community. She said she appreciates that it is an all-around socially conscious job.

“We couldn’t be more grateful for all of Zahraa’s hard work and for her dedication to mentoring our interns,” said Elizabeth Barbieri, the internship coordinator. “She is truly a guiding force for our students and we appreciate her support.”

It was only a little over a year ago that Farhat finished her internship at The AANews and she was surprised to already have received a mentor award. Her mentee from this past summer, Stephen Martin, has  also joined the paper’s staff.

Farhat said her plans to complete a Ph.D in English and become a professor are still underway, but now her plans to write creatively on the side also includes journalism.