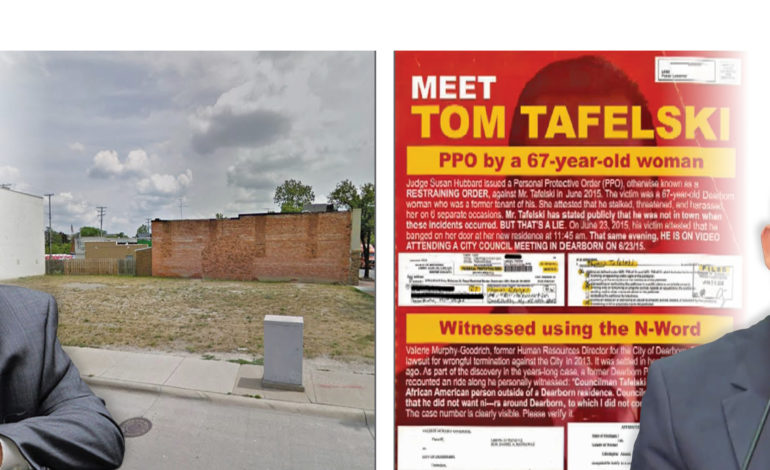 DEARBORN — The city has had its fair share of shock and scandal during recent elections, but it took the first contested mayoral race since 2001 to land incumbent Mayor Jack O’Reilly and his opponent, long-time City Councilman Tom Tafelski, in a media frenzy over poor judgment and regretted deals.

Increasing transparency in government had already been the talk of the town, especially amid former City Clerk Kathy Buda’s trial over her stealing hundreds in cash from residents, but local news coverage – originating with a Detroit Free Press story – involving accusations of the mayor accepting bribes in exchange for a development project in west Dearborn has fueled the fire leading up to the Nov. 7 election.

Secretary of State documents show that six months after the City Council gave approval for Hassan Saab, a friend of O’Reilly’s son, to build a Noodles & Co. restaurant on the corner of Michigan Avenue and Howard Street, Saab sold a 2008 Ford Escape to the mayor for $200 less than the $2,200 Saab bought it for.

Some question whether this was a backdoor deal. Questions were raised about how Saab got the green light on the development and his relationship with the mayor, alleging a conflict of interest.

“The city needs to tighten up its vetting process for potential partners,” David Levesque, from the Dearborn Music shop located near the still-empty lot, wrote on a Facebook post about the news.

Public Information Director Mary Laundroche said the city searched for bidders in 2014 to repurpose the property when it acquired it through foreclosure.

“The goal was to inspire development,” she said.

Two bidders submitted development proposals, but only Homesite Investments had the required $100,000 deposit it submitted in April.

Laundroche said a review panel appointed by O’Reilly evaluated the proposal for more than a year before it recommended it to the City Council, which approved Homesite for the development in June 2015. She added that the extent of the mayor’s involvement was appointing the panel and that he appoints several dozen review panels each year for every purchasing process, like buying cars or a new phone system.

The issue wasn’t without some contention among members of the panel, as the city was searching for an experienced developer, while Saab mainly flips residential homes and sells cars from auctions.

Among others, panelist and Dearborn Downtown Development Authority member Tom Clark was skeptical that Saab could do the job and that Noodles Co. had committed to a restaurant in west Dearborn. Homesite was still approved and was allowed to enter the deposit into escrow, to be recovered if the project was completed by Sept. 2016.

On Feb. 1, 2016, a little over six months after the City Council approval, Saab cashed a check from O’Reilly for $2,000, a couple hundred dollars less than what he’d paid for the Ford Escape he bought nine days earlier.

In a statement, O’Reilly said all the “proper channels were respected.”

Amer Zahr, an adjunct law professor at the University of Detroit Mercy, told The AANews that “there may be much to criticize in the tenure of Mayor O’Reilly, but a pattern of corruption has never been in his character.”

Soon after the car purchase, city officials learned that Saab was buying and selling homes with pharmacist Imad Soueid, who was under federal investigation for medical fraud. Soueid claimed was the mastermind behind Homesite.

In March of that year, Soueid sued Saab in Wayne County Circuit Court for stealing $1 million. Saab said his signature was forged on the records.

In June, with the deal on the verge of collapse, Soueid and Yogurtopia owner Sam Abbas met with the mayor and City Attorney Debra Walling about opening Abbas’ businesses instead of Noodles & Co. They later also met with Councilmen Tom Tafelski and Mike Sareini at a Dearborn coffee shop to ask for an extension of the development’s deadline.

Both found the request odd and told them, “This was not the proper procedure to obtain city-owned public property,” Sareini recounted in an email to city attorneys.

Tafelski secretly recorded the meeting on his phone.

“While Tafelski’s recording was technically legal, the question we have to ask is whether or not it was ethical, and whether or not it displayed leadership,” Zahr said. “Since Tafelski was the source of the recording, it can be safely assumed that he promoted the story to the media. The timing, right as the absentee ballots were going out, is questionable. And again, does this display leadership?”

Laundroche said the issues within Homesite – namely the fallout between Saab and Soueid that jeopardized the deal – had not been discovered until after they were screened by the review panel. She added that ownership of the land is now in litigation and that city believes it has the right to keep the $100,000 deposit, because Homesite did not deliver on the project, while Homesite is fighting to take the money back.

While news coverage of a deal in Dearborn gone wrong has pinned the city as having the most heated mayoral race in Michigan, residents are concerned it distracts from addressing the city’s need for improved transparency and responsiveness.

“Isn’t it strange this story shows up a few weeks before election?” asked Karl Smalley on a Facebook post about the news. “It was not a smooth landing deal,” Laundroche said.

However, she dismissed claims of impropriety and said the news story did not apparently hurt O’Reilly’s campaign for re-election.

Her office has only received a couple of email inquiring about the situation. Meanwhile, Tafelski, who was first elected to the Council in Nov. 2001 and served as its president from 2007 to 2013, was caught in the crossfires of anonymous negative campaign ads during the August primary elections.

A flyer mailed to residents accused him of impersonating a police officer, harassing an elderly woman and using a racial slur.

In a statement to The AANews, Tafelski said he is “disgusted by the false charges and outright lies” that have circulated in the campaign literature.

“In every instance, the allegations have been proven either non-existent, false or politically-motivated,” he said.