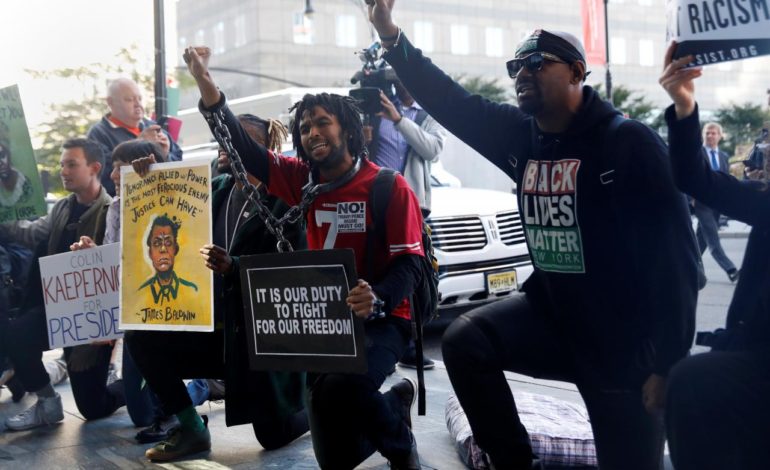 NEW YORK – National Football League officials weighed the fervor of players protesting racism against President Trump’s anger at their autumn meeting on Tuesday with supporters of the players kneeling outside in solidarity.

The NFL did not seek commitments from its players to stop kneeling during pregame renditions of the U.S. national anthem but rather focused on helping them in their political activism.

“We spent today talking about the issues that our players have been trying to bring attention to. About issues in our communities to make our communities better,” NFL Commissioner Roger Goodell told reporters.

Trump’s repeated denunciation of the players as unpatriotic for kneeling during the national anthem, which he reiterated as recently as Monday, has only made the practice more widespread.

His calls for fans to boycott games if players persist is an unwelcome prospect even for the world’s highest-grossing sports league and have forced the topic high up the agenda of this week’s regularly scheduled meeting in New York City.

Outside the Manhattan luxury hotel where team owners, players and their union’s leaders met, about two dozen people showed their backing for the protesting athletes, kneeling on the sidewalk while holding placards that read “Take a knee against police brutality.”

The small but growing number of players who have taken to kneeling during the national anthem are protesting the killing by police of unarmed black men and boys across the United States, as well as racial disparities in the criminal justice system. More than half of all NFL players are black.

Goodell appeared less interested in stifling the silent protests, despite Trump’s wishes, and instead praised players’ character, saying he wanted to help their political activism.

“Our players are men of great character. They have a very deep understanding and tremendous knowledge of the issues that are going on in all of our communities, and their commitment to addressing these issues is really admirable.”