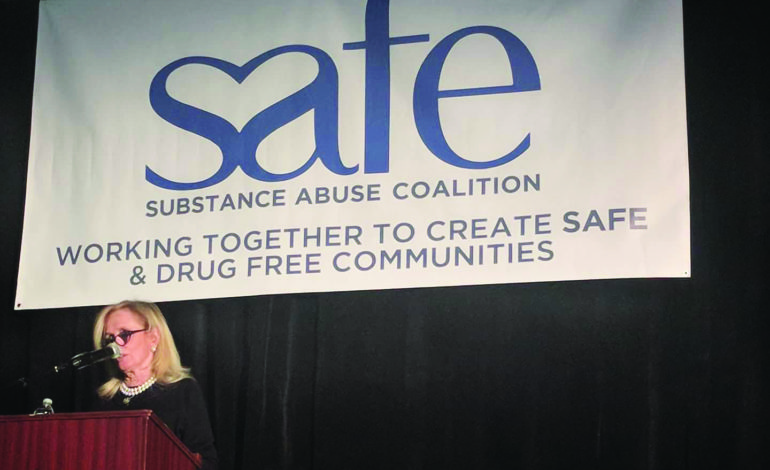 DEARBORN — every day, 91 Americans die from an opioid overdose, according to the Centers for Disease Control and Prevention (CDC). Rabih Darwiche has avoided being one of those statistics for 15 months.

On September 18, at the inaugural fundraising dinner for the nonprofit SAFE Substance Abuse Coalition, Darwiche received the first ever SAFE Rise Above Award.

The recipient of the award exemplifies, “an unwavering commitment to their recovery and helped others achieve sobriety as well,” Hassan F. Abdullah, executive director of SAFE, told The AANews.

Darwiche, who’s been sober for the last 15 months, had been to treatment on 23 prior occasions. He told the crowd that one thing addicts fear is sobriety. The crowd gave Darwiche a standing ovation prior to the award and after his speech.

“SAFE gave me the tools to do more outreach and carry the message,” Darwiche told The AANews. “By me carrying the message, and seeing the disease firsthand, it reminds me of where I came from. Because the thing is, in recovery we tend to forget. We say, ‘Oh, we can use one more time.’ And what it does is it consistently reminds me, over and over, this disease is vicious, it’s really vicious. It says, ‘Yeah you can use one more.’ Working with SAFE keeps humbling me over and over. By doing the outreach, being out there, being consistent with the people, all the work programs. It also gave me enough space for my brain to heal.”

Dingell, after thanking almost everyone, brought up some sobering statistics.

“Between 1999 and 2009 the rate of prescription opioid overdose deaths nationally increased by 293 percent,” Dingell told the audience. “In 2016, there were 11 million opioid prescriptions filled in Michigan. That is more than the population of the state. Think about that. Too often people are afraid to admit that they’ve got a problem, or seek out the care they need or don’t know where they need to go. And that is why the work of SAFE Substance Abuse Coalition is so critical. Because it’s a safe place for someone to go.”

She also said she thinks we have a problem in this country of attaching stigmas to mental health issues.

“I think way too many people take opioids or drink or take whatever is closest to them because they are suffering from depression and anxiety,” Dingell said.

She spoke about her own family’s experiences with substance abuse.

“I had a baby sister, Mary Grace,” she said. “We loved her. She had the hardest time, she probably became addicted around 8 or 9. Ultimately, I will never forget the last time we put her in for treatment. We didn’t put her in, she had to go voluntarily. We thought, ‘This is going to be it.’ This is the first time she had agreed to go, out of state, and stay in a nine-month program. Yet she didn’t stay for the nine-month program; she was out of there in 48 hours and dead a few months later.”

“Depression is real,” she said. “Anxiety is real. Let’s, as a community, find ways to help people. I don’t want to make anyone feel like a criminal.”

Hammoud said that he hopes this is an issue about which everyone can come together.

“This is an issue we need to humanize,” he said. “You have partners in Lansing.”

Abdullah thanked the Dearborn Police Department, saying officers have saved 14 lives in the community since being trained to use NARCAN, which is used to block the effects of opioids.

Police Chief Ron Haddad told the crowd that when he began his career he thought that enough arrests would fix the drug problem. He came to realize drug addiction is an illness and “a trip to jail won’t fix this.”

Abdullah said SAFE has gotten more than 150 people into recovery since its inception in January 2016. He also said one of SAFE’s goals is to build the first drug treatment center in Dearborn.