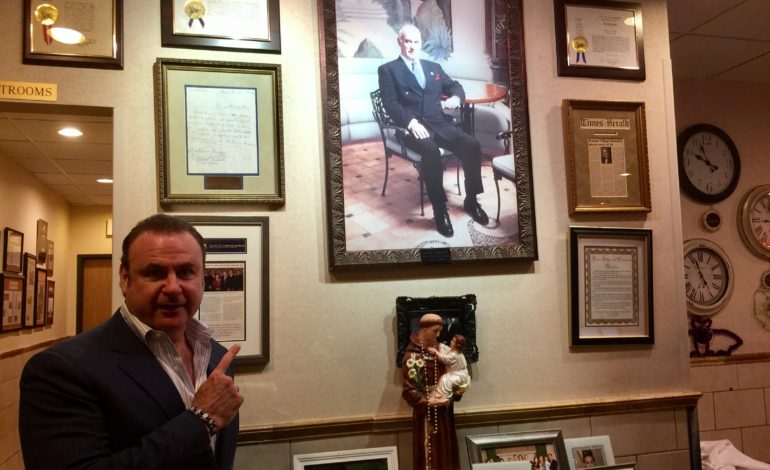 DEARBORN – In the Southend of Dearborn, across the street from the first mosque constructed in Michigan, a restaurant hangs a United States flag above a red, white and green flag. Although it may surprise some, the flag is not Lebanese, Jordanian or Palestinian.

“Our cultures aren’t very different,” Robert Rugiero, co-owner of Roman Village, told The AANews. “Even our religions, when you break it down. They’re our neighbors, we get along great.”

Rugiero is one of four sons of Antonio Francisco Rugiero and Enrica Santioni, founders of the restaurant.

He said he noticed more Arab Americans coming to Dearborn when he was a kid in the 1980s. He said the restaurant has served anyone since it opened its doors in 1964— not just Arab Americans, but the large communities of Italians, Polish, Greeks and Hispanics in the area.

When people are respected they are more inclined to return, he said.

“I think everyone likes our restaurant,” Rugiero said with a smile when asked why he thinks Arab Americans like his family’s restaurant. “They trust us to tell them if it (the food) has come into contact with pork. It’s all about trust. We give quality food, at a reasonable price, with a good atmosphere.”

He also said it’s an honor that many Arab Americans choose to break fast at Roman Village during Ramadan, adding that the place tends to fill up.

“Food doesn’t care who is holding the fork,” he said.

Rugiero also said his family respects all cultures and religions and many years ago the restaurant staff was trained if they didn’t understand.

He said the restaurant doesn’t advertise as halal, but the staff does their best to meet customers’ needs. They use three different pizza cutters, separated by pork, non-pork and bread.

Amin Mahmoud, general manager of Roman Village, began as a busboy in 1993 and said the popularity of the Italian restaurant in the Arab American community is evident during Ramadan.

“They (Arab Americans) love our pizza, seafood, bread and ranch,” Mahmoud said. “During Ramadan we go through four five-gallon buckets of our house-made ranch each day.”

Mahmoud’s parents immigrated to the Southend in 1970 from Palestine. He said his mother would make spaghetti for him and his four siblings as they grew up, and he loved it.

His second experience with Italian food was at Roman Village, just two blocks away from his childhood home. There, the love fest continued.

“It’s filling, has flavor and honestly it’s made with love,” he said.

Mahmoud said everyone in the Rugiero family knows how to cook and that their expertise in the kitchen is witnessed frequently.

Tanana said his parents, who immigrated from Lebanon in 1983, love to get the carry-out option.

Roman Village is the only Italian restaurant in the Southend.

Patrons entering through the front doors are greeted with pictures of Rugiero family members, including photos with former Presidents Bill Clinton and George W. Bush.

The business has not always been perfect as Mark Rugiero makes clear on the restaurant’s website.

“One day’s receipts were $1.75,” he said, adding that his parents were, “committed to a partnership in marriage and their new business.”

Antonio Francisco Rugiero hails from Calabria, Italy while Enrica Santioni is from Perugia. They met at Joe’s Pizzeria, the business that occupied the space before Rugiero bought it— from Joe himself.

For years Rugiero’s sons thought he was telling a folk story when he said Joe wanted out of the business and that the deal for the senior Rugiero to buy it was handwritten on the back of a placemat and sealed with a handshake. However, Patrick Rugiero, the eldest son, told The AANews the family found the placemat among their father’s possessions after he died. The deal now hangs framed in the original restaurant.

“We opened Antonio’s in Canton in 2006,” Patrick Rugiero said. “My dad would always say, ‘I can’t believe how many documents we’re signing for this loan. We didn’t sign anything like this 40 years ago when I bought Roman Village.’”

Antonio Rugiero died in October 2008 due to congestive heart failure after 30 years of life with diabetes, a cause the family continues to advocate and raise money for to this day. He is survived by his wife, four sons and 13 grandchildren.

“My mom is the matriarch, she’s still the boss,” Patrick Rugiero said. “She still works long hours, she is still there making gnocchi, meatballs and pasta.”

She does so in the same building where she began working in as a waitress after she immigrated, met her husband, and celebrated their marriage in, more than 50 years ago.

Together, the four brothers and their mother manage the original restaurant as well as the additional locations in Dearborn Heights, Farmington Hills, Canton and soon in Livonia, which are named after the late patriarch.