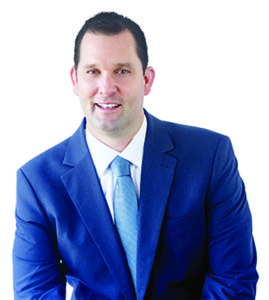 DEARBORN — This Monday, mayoral candidate and council President Pro-Tem Tom Tafelski was supposed to take part in a video interview with reporters from The AANews, as Mayor Jack O’Reilly had done, but due to a bout of laryngitis, he was unable to participate. Instead, he answered our questions via email.

Some people believe Tafelski, 47, a Dearborn native who grew up in the east end and graduated from Fordson High School, to be disconnected from the Arab American community. However, he said they don’t truly know him and what he stands for. They also don’t know that one of his godparents is Lebanese and many of his campaign consultants and supporters are Arab Americans.

“My mother taught at Salina Elementary for most of her teaching career, opting to stay at Salina even when she had the tenure to work closer to home,” he said. “I have been eating kibbee nayee’ and grape leaves my entire life… I can only continue to do in my heart what I know is right.”

As for controversy regarding his campaign’s direction, Tafelski said it’s in a positive direction and only concentrates on the issues that “impact Dearborn and how our tax dollars are spent.”

Still, many have labeled his campaign as negative, as he has been accused of being behind the negative press coverage against the mayor.

“We are not responsible for the recent Detroit-area media stories that have been presented,” he said. “The issues highlighted in the media have existed and have been a red flag for many, long before I decided to run for mayor. It has been the choice of media outlets to call me —– as a candidate for mayor — for my perspective and response to these issues.”

Tafelski also addressed the disparity in services, maintenance and infrastructure in the west and east ends, since Dearborn transformed into one city in 1928. He said the way to “bridge the gaps” is through following in the notion of “one city with one future.”

“And remember that doing so requires fair and equal treatment of all citizens and neighborhoods,” he added. “To do so, we need to also encourage greater participation of all residents.”

The AANews recently published a report that said only 8 percent of Arab Americans are represented in city government in full-time positions. Tafelski said the key way to escalate Arab American participation, and that of any citizens interested in city government positions, is to communicate with residents and community organizations efficiently in regards to available job opportunities.

“We need to do better at reaching out to those who are underrepresented but who want to work to serve their neighbors,” he said. “We must make potential employees of the city more aware of and comfortable with the hiring process with possible volunteer bi-lingual job counselors and tutors.”

Tafelski has been serving on City Council for 16 years— including six as Council president and four as president pro tem— but he noted that the most critical program he advocated for is an unbiased and steadfast code enforcement throughout Dearborn, “regardless of one’s address or income.”

“We need to go further and make sure that every city department is more user-friendly,” he said. “I also think it’s important to minimize any barriers that exist to clear and effective city communication with residents and business owners.”

He also said the city’s downtowns were susceptible to “violence and turmoil” until he and his City Council associates founded the Nuisance Abatement Board last year, which established rules and measures that have already brought safety to the city.

“I led the fight against the move of Dearborn city government from the historic City Hall at Michigan and Schaefer,” he added. “I was never against ArtSpace as a project; rather, I thought that it could have been built elsewhere in the City Hall neighborhood in order to maintain an acceptable level of foot traffic and economic activity.”

Tafelski said he is not happy with the direction the city has taken, which is the reason why he decided to run for mayor, instead of reelection as a councilman.

If he is elected, Tafelski plans to work with the Dearborn Police Department to improve neighborhood safety and create affirmative community relationships all over the city, found community “liaisons and/ or police substations while strengthening neighborhood associations”, establish a traffic bureau devoted to promoting safer streets, work with both educational and religious institutions to launch programs that address the drug abuse crisis, guarantee ordinances are imposed justly and “pursue public-private partnerships, as necessary, to implement or save city services.”

On a final note, he said he honestly believes that Dearborn will be seeing some of its best days in the near future. He said the community should vote for him on Nov. 7 because he has challenged and will continue challenging the existing issues of shifting and “unfair code enforcement in our downtowns and in our neighborhoods.

“Also, time and again, my opponent has shown that he lacks the vision and drive necessary to lead Dearborn,” he said. “Until I, and my City Council colleagues, established the Nuisance Abatement Board last year, one of the city’s business districts was unsafe. I’m proud that I led that effort. Most important, I will reach out to Dearborn residents and businesses every year, not only in election years.”