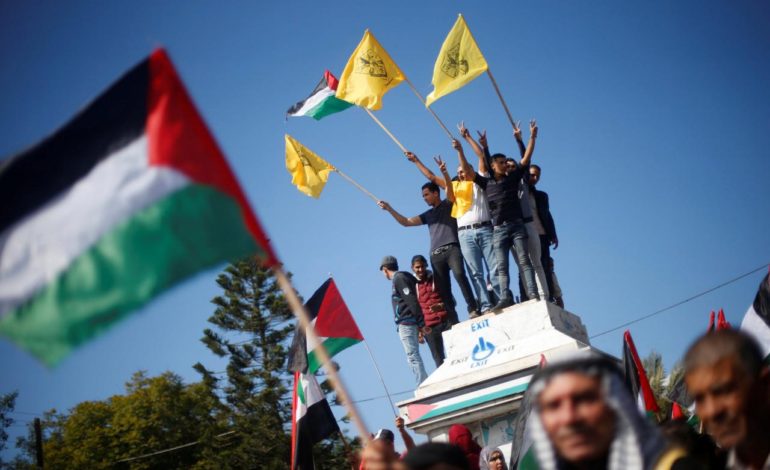 LONDON/WEST BANK ― In a 67-word statement composed 100 years ago, Britain endorsed the establishment of a Jewish homeland in the Middle East, triggering a process that would culminate in the creation of Israel – and with it one of the world’s most intractable conflicts.

On Thursday British and Israeli leaders commemorated the centenary of that statement, known as the Balfour Declaration after the foreign minister who penned it, with a banquet in the gilded halls of London’s Lancaster House mansion.

But as Prime Minister Theresa May and Israel’s Benjamin Netanyahu dine, protesters gathered to demand that Britain acknowledge the suffering they say the declaration has caused to Palestinian people, and recognized their claim to statehood.

“The reason it is getting so much attention is because the conflict which it launched … is still very much in existence and there is a sense, particularly on the Palestinian side, of continuing injustice,” said Ian Black, an academic at the London School of Economics.

“It really is an issue which is alive and toxic and bitterly divisive.”

While Israel reveres Arthur Balfour, naming streets and a Tel Aviv school after him, Palestinians decry his declaration as a promise by Britain to hand over land it did not own.

The contested declaration is at the root of the Israeli-Palestinian territorial conflict which, after several wars and decades of international diplomacy, remains unsettled.

Marches, each drawing about 1,000 demonstrators, were held in the West Bank cities of Ramallah and Nablus and in Gaza, a modest turnout for political protests in those areas. Protesters waved Palestinian flags and held banners demanding Britain rectify its “historical sin”.

In Gaza, Ahmed Helles, a senior official from President Mahmoud Abbas’s Fatah movement, said: “Britain should feel ashamed and stigmatized because of this promise and not hold celebrations.”

Israel declared independence in 1948, at the end of British Mandatory rule and after the U.N. General Assembly voted in 1947 in favor of a plan, rejected by Palestinian representatives, to partition Palestine into an Arab state and a Jewish state.