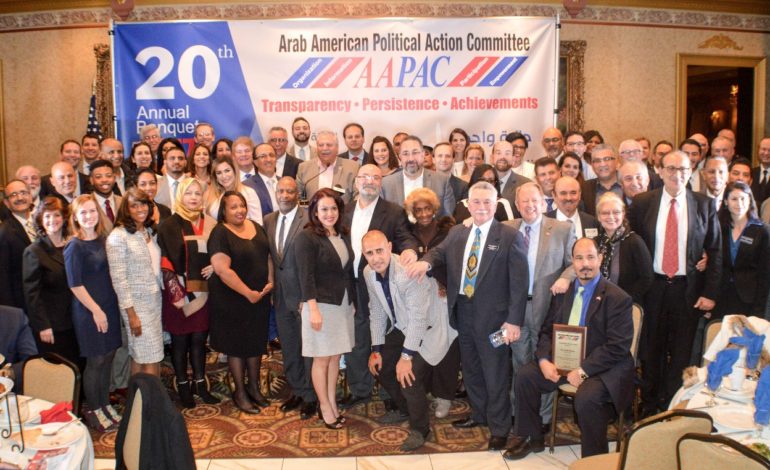 Federal, state and local government officials and candidates pose for a photo at AAPAC's 20th anniversary dinner/ Photo by The AANews

Six days before the Nov. 7 municipal elections, Arab Americans packed a large dinner hall at the Bint Jebail Cultural Center in Dearborn and reflected on two decades of achievements and looking forward to more of the same in the future, by keeping the momentum going.

Community activists, organization heads and government officials from federal, state and local levels joined AAPAC on commemorating its journey. Many of the 19 local candidates across four cities who AAPAC endorsed were present.

Mona Fadlallah, president of AAPAC, began the ceremony with a moment of silence for Manhattan attack victims, nine who were killed and 12 injured by an ISIS sympathizer on Tuesday. Among mayors of cities in metro Detroit, Dearborn Mayor Jack O’Reilly was most notable, and praised AAPAC for its role in bettering Dearborn throughout the years.

Calls by the community for inclusion and improving Arab American representation in city government has put the first contested mayoral race since 2001 in a state-wide spotlight.

O’Reilly said Dearborn has benefited in the 20 years since AAPAC was founded and that the organization has contributed tremendously to the Arab American community’s future.

Since his first run for mayor, O’Reilly has touted a campaign of One Dearborn and promised to continue that if reelected.

“Dearborn has outstanding schools and offers services second to none,” he said. “But the real thing that makes Dearborn great is the community’s unity, how they respect and work with each other to make sure everyone is included and protected.”

Osama Siblani, publisher of The AANews, remembered standing at the same podium during AAPAC’s first dinner and speculating on its future. “Look how far we have traveled in the last twenty years and the potential that can be achieve in the coming years” Siblani told the crowd.

A video presentation showed AAPAC’s far-reaching influence in successfully advancing municipal projects and candidates to local, state and federal positions throughout the years. In introducing Lt. Governor Brian Calley, the youngest in his position in the nation, Siblani called him great leader, doer, dealmaker, humanitarian and a good friend.

He added that Calley has been touring the state to learn more about the challenges Michiganders are facing, including Arab and Muslim Americans.

“Brian Calley redefined the relationship between Arab Americans and the Republican Party after it was strained by former President George W. Bush and current President Donald Trump,” Siblani said before introducing Calley.

Calley spoke about the need to get better at leveraging a stronger economy by connecting skilled individuals who have a disability, those who’ve dealt with addiction or ex-cons with employment opportunities. He told the story of an autistic man in his mid-20s who saved a company more than $1 million after being hired following a short internship.

“I want to ask you to keep the faith in reaching higher and doing more to get the places where opportunities don’t naturally hit,” he said. “But we need to have a focus on the work at hand, and not just the fight.” Relaying his story as a son of immigrants, Abdul El-Sayed, a doctor and educator aspiring to be elected governor next year, gave a speech reflecting Michiganders aspirations.

El-Sayed recalled learning in school about societies throughout American history that “put ideals ahead of identities.”

He said he’s dedicated his career to upholding those ideals. He helped rebuild Detroit’s Health Department during bankruptcy and implemented the county’s first city-wide protocol for mandatory testing of lead in water in schools and daycare centers, among other achievements.

“Solutions to problems are what will allow us ultimately to come together,” El-Sayed said. “We can choose to play on the back-foot, we can choose to put together packaged candidates or we can play on the front-foot and inspire rooms that we can walk into.” Gretchen Whitmer, a former state representative and prosecutor, who is also running for governor, applauded the achievements of Arab American individuals and organizations, including the Arab American Civil Right League (ACRL), who successfully fought against President Trump’s travel ban.

“I think tonight it’s important we talk about what it means to show up for one another’s fights,” she said. “We’ve got a man in the White House who’s tried twice to ban people from our nation of immigrants based on their religion. The success of our state are small businesses — a workforce that led the world.” Almasmari 32, immigrated from Yemen to the U.S. in 2009 and was the top vote-getter in the 2015 municipal election, took the opportunity to announce his run for state representative in 2018.

After receiving the second Public Service Award, Fadwa Hammoud, a Wayne County assistant prosecuting attorney and Dearborn School Board Trustee, said AAPAC was her training ground and that watching community leaders like Siblani and attorney Abed Hammoud has fostered her passion for public service. “Joe is living proof of how great things happen when people from far away are welcomed and embraced by their adoptive land,” she said.

Siblani applauded Fedama’s efforts, including organizing repeated demonstrations in New York, Washington, DC and locally to protest the unjust war on his homeland country of Yemen by a Saudi led coalition and supported by the U.S.