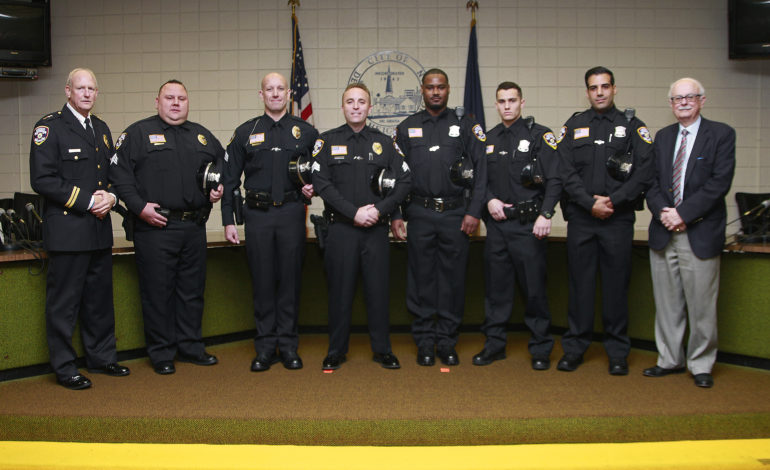 DEARBORN HEIGHTS— Back in May, The AANews spoke to Dearborn Heights Police Chief Lee Gavin about the lack of Arab American interest in the police force.

At the time, Gavin said that they barely apply.

“We’ve had meetings [about this issue],” he said. “Right now, in all the law enforcement agencies in the area, there are a total lack of applicants…Our young people are not getting into law enforcement.”

Gavin said they seem more interested in applying to a federal agency like the border patrol or homeland security.

However, the city hasn’t given up and is still seeking to recruit more representatives to its police department.

On Monday, the department added two new officers, one Arab American and one African American.

There’s slight progress in the department, Gavin told The AANews, but it’s not enough. He said it’s still a statewide problem— the number of total applicants to the police force has plummeted.

“This time, we were able to hire Ahmad Mazloum, an Arab American,  and DeAndre Tucker, an African American,” he said. “Mazloum has prior experience with the Wayne County Sheriff’s [Department]… He’s going to start off on the midnight shift and I believe he’s a local.”

Councilman Dave Abdallah expressed his optimism and said the hiring is “a move in the right direction.”

He said anyone interested in applying should not hesitate.

“Dearborn Heights is a great city to work in,” he said.”The administrative department and the mayor as a whole are focused on creating a more diverse police and fire force. Having lived and sold real estate in the area for many, many, many years, it’s the city to be in.”

Chief Gavin said he and Mayor Dan Paletko are still working on their cadet program for high school graduates who are hesitant about becoming police officers.

The city plans to launch it soon as students begin applying to colleges and begin thinking of career options.

The cadet program involves students working part-time at the department and learning about the job to see if police work is right for them.

“We help them with their education,” Gavin said. “If they want to be police officers we groom them in that direction. You got to have at least 60 credit hours to be an officer. That’s a couple years of school, so they work with us on a part-time basis.”

By the end of the program, if they feel a police career is their calling in life, they just finish the rest of the police officer requirements, which can be found on the city website, and they’ll be hired.

“We want the people who work for the city to be more reflective of the people who live in the city,” Paletko said in May. “We’ve made numerous attempts… but we need to do more.”

According to the mayor, Dearborn Heights had a cadet program 30 years ago that succeeded in recruiting candidates, so launching one again may be the solution.

“There’s ongoing contract negotiations with the hope of increasing starting pay,” Gavin told The AANews on Wednesday, but the City Council still has to approve it.

Gavin said he wants the community’s advice in regards to the youth.

“We need our young Arab American and African American youth to want to get into law enforcement,” he said. “So my question to [the community] is what can we do better to attract [them]?”

Both he and the mayor welcome comments or feedback from residents. Those wanting to share their thoughts can call the police department, the mayor’s office or email Gavin. The contact information is available on the city website.

Gavin added that he’d also be glad to speak to the city’s youth. They just have to call the office and leave their name and number, so he can get back to them.