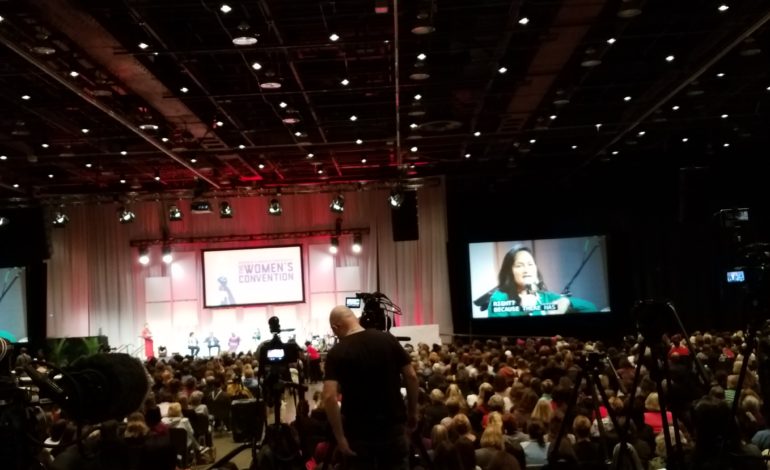 By Afaf Humayun and Stephen Martin

DETROIT—“We have no time, there are people counting on us,” said Linda Sarsour in the opening session of the Women’s Convention in Detroit at Cobo Hall on October 27. “People’s literal survival lies in our hands to protect those among us that are the most marginalized.”

Sarsour is a Palestinian American and a co-founder of the Women’s March. She spoke in multiple lectures at the convention.

During her opening speech, Sarsour spoke about diversity in the women’s movement and the urgency in educating people on issues such as policy, social justice and human rights.

The Women’s March is a nonprofit founded after the general election last year. The group organized the “Women’s March on Washington”, which took place internationally on January 21. Women’s March officials claims the January march was the largest single-day protest in United States’ history.

Last weekend’s convention was titled “Reclaiming Our Time” and it drew in more than 5,000 attendees from around the nation.

The convention lasted three days and consisted of interactive workshops and lectures that educated attendees on political activism, social justice and human rights work. It was women-led and included representation of different religions, sexual orientations, cultures, political affiliations, people of different physical abilities and all genders.

“Unity is not uniformity,” Sarsour said. “Even when I disagree with people in the movement, I still love you; I still want you to be treated with dignity and respect. That is the foundation that this movement will be built on.”

Sarsour said the women’s movement is inclusive of everyone, regardless of political ideologies.

The AANews caught up with Sarsour after the opening presentation, at one of the first workshops, titled “#RepresentHer: Demanding Better Representation.”

This session highlighted a panel of female leaders answering questions about the lack of representation women have in American government. “Women make up half the U.S. population and give birth to 100 percent of the population, but still make up less than 20 percent of Congress,” according to the movement’s website.

During the first session, Sarsour told the crowd about how she became “radicalized”, a term she said she used deliberately because it means “to get to the root of the problem.”

She said she was a leader in her family since the age of 10, when she would help her mom read and organize contracts since she didn’t speak English.

The 9/11 attacks took place when Sarsour was enrolled at Kingsburg Community College in New York. She said she walked outside, held out her hand and had little white pieces of paper falling into her hand.

On the Friday following 9/11, she said that women came into her mosque saying people had barged into their homes and were taking their husbands, brothers and sons. She said that because she was bilingual she began making phone calls to attorneys who were willing to work for those families being mistreated.

“That was the moment that led me here,” Sarsour said. “Ever since that day on 9/11, I became the activist I am today. I believe that if you want to change something, if you want see something better, then you yourself have to step up.”

During the workshop, Sarsour also said internalized patriarchy is a major problem for women. She said one of the keys to ending the patriarchy is women’s unity and solidarity and pleaded to the standing-room-only crowd to not just wake up every two or four years but to “stay woke.”

On Saturday, the main auditorium at Cobo was nearly full as performances, speakers, and panelists took the stage. The session was titled “Ain’t I A Woman”, after the famous Sojourner Truth speech delivered at the 1851 Women’s Convention in Akron, Ohio. A young girl performed the speech with exuberance.

Michaela Angela Davis, a writer, activist, and entrepreneur, served as the emcee for the session.

Dingell spoke about domestic violence and how it’s critical for this issue to be addressed in the U.S., While Schriock spoke on the rise in the number of women running for office since last November.

At the end of the session, U.S Rep. Maxine Waters (D-CA) was honored for her years of service and activism.

Waters spoke about sexual harassment against women and how it won’t be tolerated anymore.

She also said President Trump is the most “despicable and dishonorable human being” to have served as president.

At the end of her speech she began chanting “impeach 45” and the audience joined in with fists raised. Inspirational and activist art was on display at the convention

In another session, entitled “Cultural Influencers as the Gatekeepers of Truth in the 21st century”, the panel consisted of actors and activists, Jackie Cruz, Piper Perabo, Yandy Smith and United States’ Olympic fencer and entrepreneur Ibtihaj Muhammad.

Muhammad spoke about being Muslim and Black in the spotlight.

“If you don’t speak up for people who look like you, who is going to do it?” Muhammad said. She said that in her career, she’s received pressure from her management to refrain from and delete political posts on social media.

“I never deleted my posts,” she said.

Perabo said that she was discouraged in Hollywood from being political in public; regardless, she chose to be and said she discovered confidence and felt it contributed to making her a better artist, since it helped her to better understand people.

As the conversation turned toward representation of minorities and other marginalized groups in the media and television, Muhammad said she sees it as increasingly offensive to see Muslims represented as terrorists on every show.

“Muslim kids see that representation,” she said, calling that misrepresentation of Muslims “hurtful” to young Muslims.

In a workshop titled “Essentially Empowered, How Self-Care Fuels Rebellion”, Virginia Dodge led a workshop on meditation, observation, equity and inclusion, as well as self discovery.

Dodge said that when people invite what they want and need into their reality through self-discovery practices, they can begin to manifest into their consciousness a mindful reality.

She had the attendees participate in breathing exercises to educate on “diaphragmatic breathing”, which is a way to lower stress levels and increase oxygen levels in the bloodstream.

In the closing lecture on Sunday, Carmen Perez, Women’s March co-founder, spoke on the importance of giving platforms to marginalized groups and minorities, especially members of the Native American and African American communities.

Women’s March Co-Founder Tamika Mallory ended the final lecture referencing art and also the presence of men as vital components to the movement.

One third of attendees were there through sponsorship and some even had their hotel and travel paid for. Some universities and nonprofits were able to sponsor students and others who could not afford to attend by their own means.

Now that the convention is over, those who attended have been encouraged to set-up “huddles” or discussions within their communities to disseminate concepts and information they learned.

For more on the women’s convention and women’s march visit www.womensmarch.com