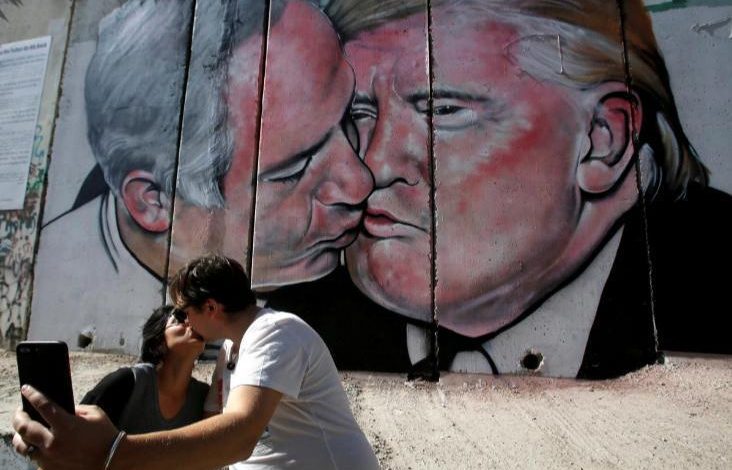 WEST BANK – Another Donald Trump mural believed to be the work of Australian graffiti artist Lushsux has popped up on Israel’s barrier in the occupied West Bank, this time depicting the US President sharing a kiss with Israeli Prime Minister Benjamin Netanyahu.

His face hidden by a headdress, a man who identified himself as Lushsux said against the backdrop of a cement section of the Israeli wall in Bethlehem that he hoped his painting would draw attention to Palestinians stuck in “an indoor prison”.

The Bethlehem wall has become a showcase of protest art voicing Palestinians’ fears that Israel’s West Bank fence-and-concrete barrier is a land grab that may deny them a state. Israelis deem the project a bulwark against Palestinian attack.

”The wall is a message in itself,“ the man, who said he painted the mural overnight, told Reuters. ”I don’t need to write ‘Free Palestine’ or something like that, something really direct… that people will ignore.

Murals on the barrier believed to be the work of Lushsux include one showing Trump kissing an Israeli watchtower and another depicting him placing his hand on the barrier and thinking about building a similar wall on the US border with Mexico.