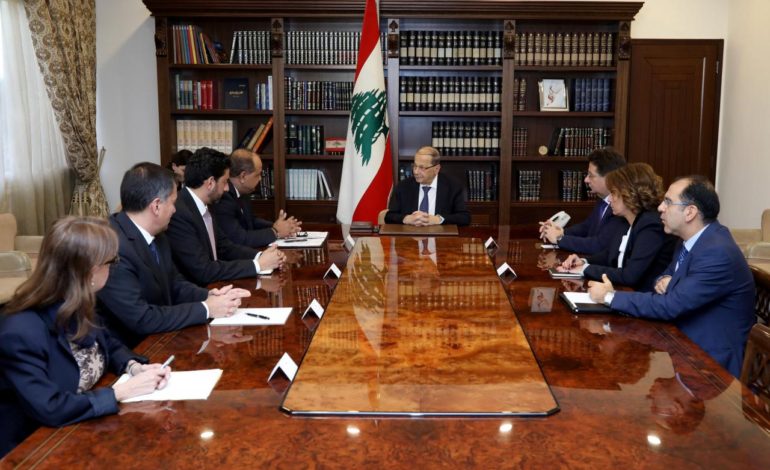 Lebanese President Michel Aoun meets with a delegation from the World Bank at the presidential palace in Baabda, Lebanon, November 8.

BEIRUT — The European Union and the United States on Wednesday reaffirmed support for Lebanon after the resignation of its prime minister, striking a sharp contrast to Saudi Arabia, which accuses Beirut of declaring war because of Hezbollah.

Statements of support from EU ambassadors to Lebanon and the United States have set a different tone to their Gulf ally Saudi Arabia, which has lumped Lebanon together with the Iran-backed Lebanese group Hezbollah as parties hostile to it.

Lebanon has been pitched into deep crisis since the Saudi-allied Saad al-Hariri resigned on Saturday in a speech delivered from Saudi Arabia in which he accused Hezbollah and Iran of sowing strife in the Arab world and cited fear of assassination.

The circumstances surrounding Hariri’s sudden resignation have given rise to wide speculation that he had been caught up in a high-level anti-corruption purge in Saudi Arabia, where his family made their fortune, and coerced into resigning.

Saudi Arabia has denied this along with reports that it has put Hariri under house arrest. It says he quit because Hezbollah was calling the shots in the government.

The move has pulled Lebanon back to the forefront of a regional struggle between the Sunni monarchy of Saudi Arabia and the Shi‘ite Islamist government of Iran, a rivalry which has also swept through Syria, Iraq, Bahrain and Yemen.

It has plunged Lebanon into political crisis and hit market confidence in the heavily indebted Lebanese state. A sell off of Lebanese bonds continued for a third day on Wednesday, with some of them hitting their lowest ever levels.

The U.S. ambassador to Lebanon said on Wednesday the United States remained “committed to a stable, secure, democratic, and prosperous Lebanon” during a meeting with Lebanese army commander General Joseph Aoun, a U.S. embassy statement said.

The meeting was to announce a U.S. government reimbursement of $42.9 million for border operations conducted by the Lebanese army, a major recipient of U.S. military aid.

The United States classifies Hezbollah as a terrorist group even as it supports the weak Lebanese state, drawing a line between the two in a long-standing policy.

“We expect all members of the international community to respect fully those institutions and the sovereignty and political independence of Lebanon,” she said.

In a statement, EU ambassadors to Lebanon said they reaffirmed “their strong support for the continued unity, stability, sovereignty, and security of Lebanon and its people”. 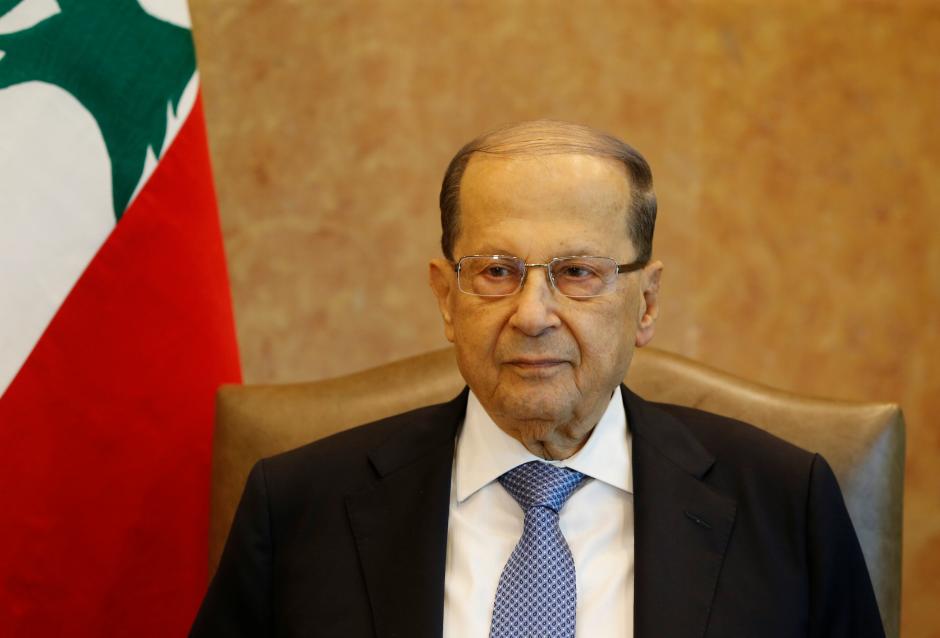 Lebanon has also received significant Western aid to help it cope with the strain of hosting 1.5 million Syrian refugees, equivalent to around a quarter of the population.

Hezbollah, set up by the Iranian Revolutionary Guards in 1982, is the most powerful group in Lebanon, with major sway in government and a guerrilla army that outguns the national military.

The group’s role has grown beyond Lebanon in recent years, and its fighters have provided critical support to President Bashar al-Assad in the Syrian civil war.

Neither Hezbollah nor the Lebanese government have responded to accusations made by Saudi Gulf affairs minister Thamer al-Sabhan that both Lebanon and Hezbollah had declared war on the kingdom.

President Michel Aoun, a Hezbollah ally who took office last year, has refused to accept Hariri’s resignation, saying he first wants him to return to Lebanon so he can meet him in person to understand the reasons.

Lebanese policymakers and bankers say there is no concern for the Lebanese pound – which has been pegged against the U.S. dollar at the same rate for two decades – thanks to record levels of foreign currency reserves.

Banking sources say there was more demand than usual for converting Lebanese pound savings into dollars when banks opened on Monday. But they said this was not unexpected and is at minimal levels.

Lebanon’s June 2020 bond, and its April 2020 issue both fell to their lowest ever levels on Wednesday.

“Yields could come down, if a new Prime Minister is found quickly and the government can get back to business, but this doesn’t appear to be likely in the short term,” said Carmen Altenkirch, emerging market sovereign analyst at Axa Investment Managers.

Byblos Bank’s Chief Economist Nassib Ghobril said: “We’ve had worse cases when we saw pressure on the actual peg of Lebanese pound to U.S. dollar but it takes a severe shock of the magnitude of the (former Prime Minister Rafik al-Hariri) assassination in 2005 or the 2006 Israeli war to put real pressure on the currency peg.”