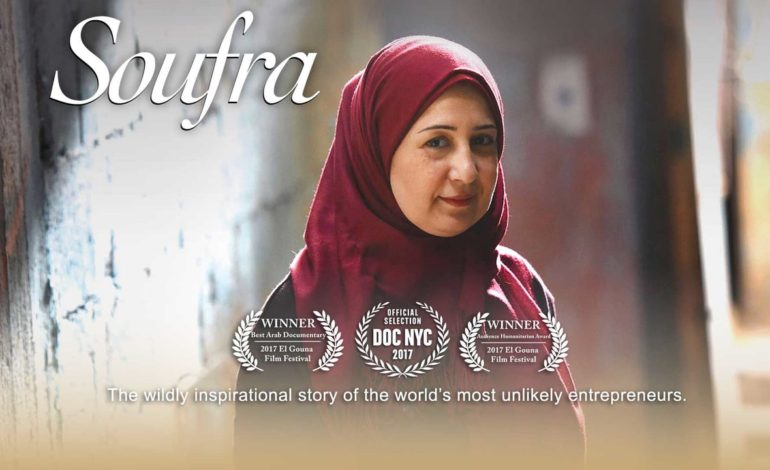 BOURJ EL-BARAJNEH — When you’ve lived your entire life in a 69-year-old refugee camp, you’d probably never expect your own journey to be documented and potentially qualify for an Academy Award, as there are so many living in similar circumstances— but that’s the exact story of Mariam Shaar and her friends.

In the southern suburbs of Beirut, Lebanon, between the Rafic Hariri International Airport and the town of Haret Hreik, lies their residence— Bourj el-Barajneh— a municipality offering refuge to many fleeing war and terror.

In 1948, the League of Red Cross Societies built a camp at the municipality’s rim to house an influx of Palestinian refugees when Israel invaded and occupied Palestine.

According to the United Nations Relief and Works Agency (UNRWA), more than 17,945 refugees reside in the 1 square kilometer camp.

The crisis in Syria led to a striking increase in population, so it’s the most overpopulated refugee site in Beirut, with terrible living conditions, narrow roads, an old sewage system and regular flooding in the winter. UNRWA reported that men commonly work as casual construction laborers and women as either seamstresses in factories or cleaners.

However, Shaar, a third generation Palestinian refugee, broke the status quo and became a successful entrepreneur and the owner of a mobile catering company called Soufra (feast in Arabic) — inspiring the world with her determination and leadership.

Glynn, who’s known for her work on “Bowling for Columbine”, “Fahrenheit 9/11” and “Sicko”, told The AANews that their new documentary, “Soufra”, has not yet been officially released, but is screening at film festivals and has won two awards already.

“When I first heard the story, I thought, ‘wow this is very interesting to me,’” Glynn said. “No country, no passport, but the keys to a truck.”

Mariam Shaar fearlessly brought together a diverse team of refugee women, including Palestinians, Iraqis, Yemenis and Syrians, who had lost hope in the camp, to start their own catering company and build a better future for themselves.

The organization said in 2013 that Shaar asked for “funds to set up a catering unit.” She told Alfanar officials how she surveyed the women in the camp to find out what they enjoyed doing and asked them how they believed they could make an income. They said they wanted to work on their cooking skills.

Alfanar decided to assist Shaar, and after much success, the organization recognized that demand for catering is “seasonal.”

“That means lumpy revenue for Soufra — and erratic income for the women,” it said. “So we started brainstorming new ways of generating steady orders. As ideas were being thrown about, we remembered the U.S. movie ‘The Chef’ and realized that if Mariam could buy a Soufra food truck, the women wouldn’t have to just sit and wait for the phone to ring. They could take their food to straight where their customers are.”

Glynn said it took nearly two years to complete the film due to the many setbacks Shaar and her team faced, persisting until they finally established their mobile company.

“She’s a generational refugee,” Glynn said. “This is all she has known, yet she has an entrepreneurial spirit… She has the energy, the focus, the skills… I mean she could be a General Motors executive… With meager [resources] at her fingertips, she [accomplished] this.”

Glynn said the film focuses on the women’s transformation from an initial feeling of hopelessness to self-empowerment, and of course, Shaar’s tenacity that leads the way.

“Their true personalities came out and they truly shined,” she said.

Along the way, Glynn said the women wrote their recipes down and the producers worked with them on a cookbook, also titled “Soufra.” She said the women’s organization Shaar runs had seed money it wanted to use, so the members decided to work on a cookbook.

“They started it in a real simple way and then it just grew,” she said. “The cookbook is really gorgeous and it’s gorgeous because of them… You see the spirit of friendship.”

The book can be found on Rebelhouse Group’s website and is a means of giving back to families at the camp.

“The women of Soufra, through WPA, are full partners in the publication of this book,” Rebelhouse Group wrote on its site. “They will share equally in proceeds from its sales, which will contribute to the ongoing development of the camp’s Children’s Center and to building a school for the children in the camp.”

As for the film screening, Glynn said the filmmakers were invited to the El Gouna Film Festival in Egypt in September. The film won two awards, the Best Arabic Feature Documentary and the Cinema for Humanity Audience Prize.

Soufra will premiere in North America at the DOC NYC documentary film festival on Nov. 12 and is also part of Arab Cinema Week in New York.

“We are in the process of selling the film,” Glynn said. “So, as soon as that happens, the date will be set to be in regular theaters. In the meantime, we will do the film festivals to raise awareness about the film.”

Glynn said the documentary will be played in Los Angeles for one week, starting Nov. 17, and then on Dec. 15 for one week in New York City in its process of qualifying for an Academy Award.