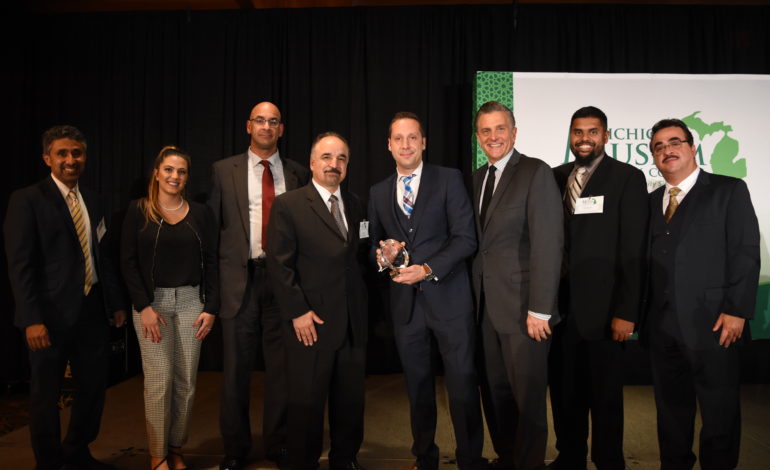 DETROIT— In a world where the news has become corporatized and out of touch, honest and fair reporting is hard to come by, but on November 5, the Michigan Muslim Community Council (MMCC) presented Simon Shaykhet and WXYZ-TV with the “Fairness In Media” award by at its 31st annual banquet.

The MMCC Unity Banquet is held each year to celebrate diversity and to recognize Muslims and Muslim allies in their work in the community.

“It was an incredible honor to be recognized for fairness in journalism,” Shaykhet said. Shaykhet played a big part in working on a multi-platform series by WXYZ-TV titled “Muslim American, inside a growing Michigan community.”

He said the digital exclusive covered what it means to be Muslim in America.

“Muslim American” included topics such as the history of Dearborn, misconceptions of Muslims and Arabs in society, as well as the Islamic holy month of Ramadan. It also featured fears and discrimination Muslims are presently facing around the country.

“It’s a tremendous honor for me,” Shaykhet said. But he never referenced the award and “Muslim American” without talking about the teamwork that went into the project.

Additionally, he said he and his team wants to continue to tell positive stories that are fair and honest in order to educate communities on “our Muslim American brothers and sisters.”

Shaykhet said he first knew he wanted to become an investigative reporter in 2003, during a summer internship with WXYZ while he was an undergraduate student at Michigan State University. “I was so impressed by the staff, the journalists and everyone at the station,” he said.

Mike Murri, general manager at WXYZ was honored alongside Shaykhet; he accepted the award on behalf of the news station.

“When any group or organization rewards you for fair and balanced media reporting, that is the ultimate compliment that a news organization can get,” Murri said.

Murri said “Muslim American” was a connectivity to the community and that it was a highly collaborative effort led by Shaykhet. He also said the series is timeless and educational.

“We work hard to give the community a voice, to listen to them,” Murri said.

Additionally, Murri said he and his team work tirelessly, day in and day out, to provide fair and balanced reporting.

“To have this recognition by the community in this way is truly an honor,” Murri said.

Murri said WXYZ is hosting a town hall event at the Dearborn Ford Community and Performing Arts Center on December 5 at 6:30 p.m. as another way to listen to and learn about local communities.

WXYZ held town halls in different Metro Detroit communities this year titled “Detroit 2020” and Dearborn is the final location for the event series.

“It is a very simple premise,” Murri said. “Our objective is to go into different communities and give the community a voice. What’s important to them? Their hopes, fears, challenges.

He said in order for him and his team to do their job better, they need to have conversations with the community. Shereen Abunada is the director of operations at MMCC.

She said the Unity Banquet is an event for highlighting the accomplishments of Michigan Muslim communities and allies, and the intent behind the banquet has always been inclusion.

“We always want to celebrate our allies and especially our media partners, who make an effort to dispel any stereotypes and misconceptions surrounding the Muslim community,” Abunada said.

Abunada said MMCC awarded Shaykhet and WXYZ because of “Muslim American” and also, for their honest and fair reporting in the general work they do.

“The general manager, Mike Murri, was instrumental in putting this out,” Abunada said.

A third set of awards was given out to youth leaders Ammar Al-Qouqa, Hana Alasry, Khodr Farhat, Khadega Mohammed and Adam Siddiqui for leadership and service in the Michigan Muslim community.

The keynote speaker for the event was Farhana Khera, the executive director of Muslim Advocates.