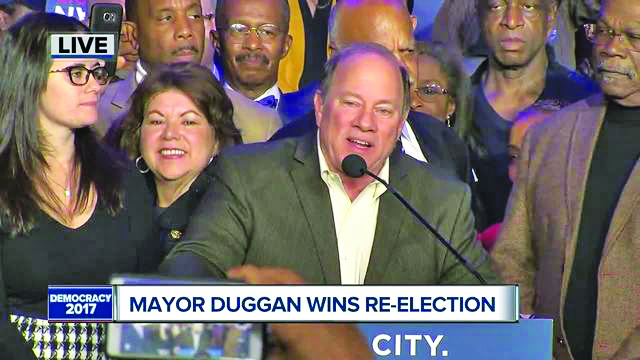 “It’s been a year-long campaign and though all of the different kinds of attacks, I’ve been treated with nothing but warmth and kindness from Detroiters… I am just so appreciative,” Duggan said in his victory speech at the Detroit Marriott, where his supporters gathered in celebration.

Duggan said his campaign had to decide whether or not to “trash” Young or focus on the mayor’s vision for the next four years.

“‘If you have to divide people in order to get elected, you’ll never be able to govern,'” he said, quoting former President Obama.

Duggan said he didn’t care to respond to the “us-versus-them attacks” and is proud that his campaign didn’t spend any money on media or mail attacks on his opponent.

“I hope that this is the year where we put us-versus-them politics behind us forever because we believe in a one Detroit for all of us,” he said. His supporters followed with a “One Detroit” chant.

Duggan addressed the 9,000 people working for Detroit with a special thank you message. He said “75 percent” of Detroit believes in the city’s direction and that’s because of the hard work the employees put in.

“City government is going to stay in the hands of a strong financial management team,” he said. “And, to those 9,000 employees, you can enjoy this holiday. Nobody’s going to be talking about cutting your pay, cutting your health [and] cutting your pensions.”

Young conceded his loss with a positive message to the city and his campaigners.

“This one’s for you, Detroit, we love you, we appreciate you,” he said. “I thank God for you, Detroit. Even though you didn’t choose me, I know we can do great things together. Remember why we got in this race in the first place: So people who would never have had a voice would have one.”

He said his campaigners are the voice and hope for those who don’t have any.

“We use our power to serve the powerless,” he said, adding that the fight isn’t over and that they are leading the way for the next generation.

Duggan won his first four-year term when he beat Wayne County Sheriff Benny Napoleon in the general election in 2013. He is the first White mayor of Detroit in 40 years.

In the race for city clerk, incumbent Janice Winfrey was reelected with 50 percent of the vote, compared to 49 percent earned by her opponent, Garlin Gilchrist. According to ClickonDetroit.com, less than 1,500 votes separated the two totals. Wild was elected to the City Council in 2001. In January, 2007, he was chosen to replace former Mayor Sandra Cicirelli when she became an 18th District Court judge. He was then elected to a full term in his own right that November. He subsequently ran unopposed in 2009 and 2013.

Wild garnered 7,345 votes Tuesday, while Coleman received 5,336 votes. Coleman will not have a seat on Council next year, since he gave up reelection when he ran for mayor.