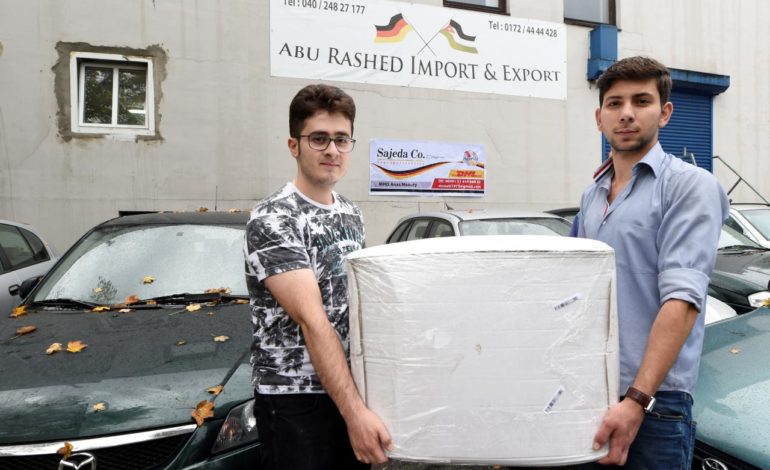 Workers carry a parcel with Syrian fabrics and goods to a van in Hamburg, Germany, October 20/ REUTERS

HAMBURG ― Many Syrian refugees in Germany have resigned themselves to the reality that there will be no swift return to the land of their birth, where a civil war is nearing the start of its eighth year.

They are starting to build new lives in their host country, driving up demand for “Made in Syria” goods there as they seek to soothe homesickness with a precious slice of their old lives.

Products popular among the half a million Syrians, who mainly arrived over the last three years, range from nuts, sweets and sesame paste to clothes, vertical spinning grillers used to make shawarma meat in diners and hair removal wax.

“People want the very same things they were used to in Syria,” said trader Anas Msouty, sitting in his dim underground office near Hamburg Port as workers sorted out parcels of baklawa sweets and clothes that had just arrived from Syria.

“The German market is full of similar products from Turkey, but Syrians want Syrian (goods),” added the father-of-six, who had to abandon his Islamic women’s clothing factory outside Damascus when he fled the country.

Orders have grown 25-fold since Msouty set up his trading firm Sajeda three months after his arrival in Germany in early 2016. He now imports 25 tonnes of Syrian goods a month.

He is not alone in capitalizing on this trend; dozens of Syrian restaurants, stores and supermarkets have sprung up in all major German cities over the past two years, with more opening every month. In Berlin alone, at least half a dozen new Syrian eateries and as many supermarkets have opened this year.

The rise in demand for Syrian goods is contributing to a gradual revival in Syrian exports to Germany, which has taken in more Syrian refugees than any other Western nation.

More than 5 million Syrians – almost a quarter of the pre-war population – have fled the Middle Eastern nation, according to the United Nations.