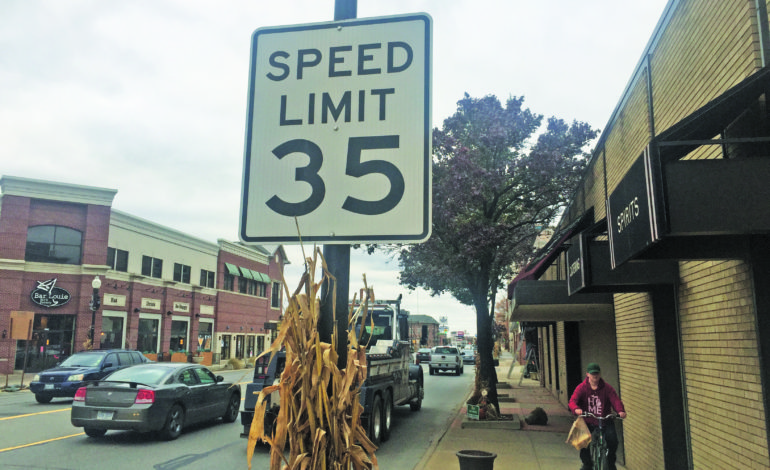 DEARBORN — “The objective of any speed limit is that it can be reasonable, enforceable and that it assures a maximum limit,” according to the Michigan Department of Transportation’s website.

Although, according to some experts, appealing to pedestrians with a lower speed limit may be more beneficial to society.

“Many of the world’s cities can become safer, healthier places by changing the design of their streets and communities,” according to the executive summary of “Cities Safer by Design”, a report released by the Washington, D.C.-based World Resources Institute Ross Center. “Where public streets have been designed to serve primarily, or even exclusively, private motor vehicle traffic, they can be made immensely safer for all users if they are designed to effectively serve pedestrians, public transport users, bicyclists, and other public activity.”

If you’ve ever worked with the Michigan Department of Transportation, you know they do what they want to do,” EDDDA Executive Director Michael Bewick told The AANews.

He added that he would love to have the speed limit in both the east and west downtowns lowered.

“Down to 30 maybe,” he said. “That’s something we’ll be exploring next year. MDOT’s philosophy is we’re here to move traffic, not to have them [drivers] slow down and look at the stores. One of the blessings we have is that Michigan Ave. cuts through downtown, but it’s also a curse.”

Michigan Ave. is part of US-12, which  stretches 2,491 miles, from Detroit to Aberdeen, Washington, according to Richard Weingroff of the U.S. Department of Transportation. The portion in Dearborn spans from Wyoming St. westward seven miles to S. Gulley Rd.

Cristina Sheppard-Decius, executive director of the West Dearborn Downtown Development Authority, said the WDDDA’s goal is to make west Dearborn more walkable and more pedestrian-oriented. She said a median on Michigan Ave. has been proposed to MDOT.

“It’s the right direction,” Sheppard-Decius said. “It’s improving a couple things in different areas for both pedestrians and motorists.”

Sheppard-Decius also said the construction in west Dearborn that forced the closure of the center turn lane has improved traffic flow and pedestrian safety.

“Generally, you’re not going to see an MDOT right-of-way go lower than 35 (mph),” she said. “It creates challenges, challenges in the sense that we as a city, and DDA in partnership with the city, we can’t make the changes we want to make. We have to thoroughly research them, look at potential changes of design and still show there is a certain level of service that the state of Michigan requires on their roadways before going forward with any improvement. We have a lot of people we have to go through in order to get those changes.”

She gave an example of the difficulty when working within MDOT’s standards.

“The one thing we found that we can’t do is widen the sidewalks in that area,” she said. “We have to keep the curb line that MDOT has. When you add more ability for pedestrians to be out on the sidewalk you automatically start to slow traffic down.”

Sheppard-Decius said that during the Halloween trick-or-treating event on Oct 28 in West Dearborn, there were about 1,000 people on the streets. She said that while walking around downtown that night there was a noticeable difference in the regular traffic speeds because the motorists were interested in what the pedestrians were gathered for.

“MDOT owns the road,” Diane Cross, MDOT’s communications representative, told The AANews. “If MDOT has a project planned for the road, based on its condition or safety concerns (from a traffic study of crashes, etc.), we will talk with local government about things like where crosswalks are best to add, connect sidewalks, and will see if the locals want to invest any money in the project to upgrade the landscaping, light fixtures, etc. MDOT would implement our own work and the work being paid for by locals.”

Cross also explained the situation if a community were interested in changing an MDOT road.

“If MDOT does not have a project planned, and the city wants to do something, the city may seek a permit from MDOT to do something on MDOT roads,” she said. “The city would do the work and pay for it. If the city wants to do something but does not have funds, it would apply for a grant for federal dollars. MDOT facilitates the distribution of federal dollars to Michigan for the feds. MDOT would help (the) city with filling out its grant, but would not be giving MDOT money. [It would] act as the go between the city and any federal money received.”

“The typical American city is not Washington D.C. or New York, or San Francisco, it’s Grand Rapids or Cedar Rapids or Memphis,” Jeff Speck, a popular city planner and urban designer, said in a TEDxMidAtlantic presentation published on March 2. “But in the typical American city in which most people own cars, the temptation is to drive them all the time. If you’re going to get them to walk, then you have to offer a walk that is as good as a drive, or better.”