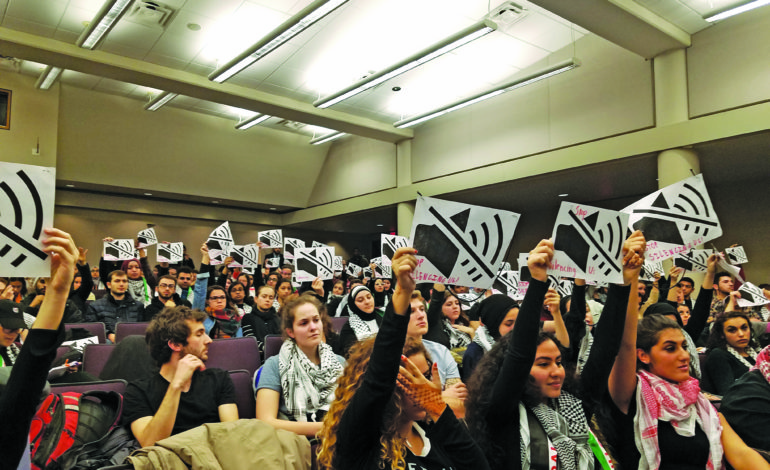 ANN ARBOR — On November 15 at 3 a.m., a historical moment took place at the University of Michigan when the Students Allied for Freedom and Equality (SAFE) passed a resolution at the Central Student Government (CSG) meeting regarding U of M’s investment ties to companies involved in human rights violations.

The investigation of companies would include Boeing, Hewlett-Packard and United Technologies.

Each year, students brought forth a divestment resolution, but it has never previously received a majority “yes” vote.

The meeting began Tuesday evening, and after roughly eight hours of comments, review and statements for and against the resolution, it resolution passed with 23 students voting for, 17 against and five abstentions.

CSG will now ask the university’s regents to form an ad hoc committee. Authors of the resolution speak

U of M’s investment policy states that regents appoint ad hoc committees to investigate ethical and moral implications of their investments when three conditions are met.

During one of the comment portions of the meeting, a law student said it would be virtually impossible for U of M to do business inside and outside of Ann Arbor if the resolution passed.

An alumna spoke read from a letter signed by a coalition of alums in favor of the resolution.

Nadine Jawad, the vice president of the student body, spoke during the community concerns portion.

“I’m sorry that you feel that this resolution hurts you as individuals,” Jawad said about her concerns for students opposed to the resolution.

She said she supported divestment in her freshmen year and faced discrimination thereafter; she also said she noticed other students faced backlash as well in their support for divestment.

She said she was afraid to speak because of a “blacklist” which labels any supporter of divestment a terrorist.

Spellman said since UM-Dearborn passed a resolution regarding divestment, the only Jewish member of UM-D’s student government is now scared to express public support of Israel.

Andrea Sahouri, SAFE’s co-chair and a Palestinian, said she is told to have dialogue with others on the issue and added that SAFE consistently has held educational events each term. “We have Jewish members in our group,” Sahouri said. “We fight anti-Semitism.”

In September, Dana Greene kneeled at the campus square, The Diag, in protest of racism against African Americans.

“I recognize that their suffering is my suffering,” Greene said about Palestinians.

In the final hours of the meeting, the authors of the resolution stood at the microphone and heard questions from the audience.

The debate and the vote followed.

A motion was made for the vote to use secret ballots to ensure the safety of CSG members.

One of the speakers in the meeting mentioned a blacklist created by Canary Mission, which defames any individual who supports divestment or the broader Boycott, Sanctions and Divestment (BDS) movement.

Secret ballots were used, but the Michigan Daily continued to film a live-stream of the event saying it “had the right” to record.

Last year, the Michigan Daily turned off its recording device out of respect for the vote.

Once the results were announced there were loud applause and cries.

For many moments afterwards, sounds of crying could be heard and members of the student body spoke on stage about how students should reach out for help if they feel deeply affected by the passing of the resolution.

According to an MLive article on Thursday, U of M Spokesman Rick Fitzgerald said he doesn’t see a change to the approach the university has taken in the past to investigate the ethics of U of M investments in regards to its shielding its endowment from political pressures.

“We do not anticipate a change in this approach or the creation of a committee,” he said.

Since the resolution passed, there has been commotion on social media.

In the last week, Canary Mission has been defaming U of M students by posting their photos and names on their website and social media platforms.

The students break soon for Thanksgiving, but the conversation regarding the resolution continues.