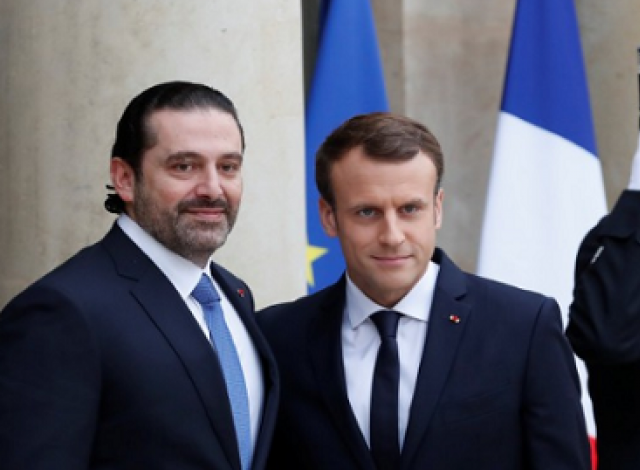 PARIS – Saad al-Hariri, who resigned as Lebanon’s prime minister this month while in Saudi Arabia, said on Saturday he would clarify his position when he returns to Beirut next week for Independence Day.

Hariri’s resignation on Nov. 4 threw Lebanon into political crisis and put it center-stage in the Middle East’s overarching rivalry between Saudi Arabia and its allies and a bloc led by Iran.

“With regard to the political situation in Lebanon, I will go to Beirut in the coming days, I will participate in the independence celebrations, and it is there that I will make known my position on these subjects after meeting President (Michel) Aoun,” Hariri said after holding talks with French President Emmanuel Macron in Paris.

Hariri declined to take questions, but is set to return to Beirut by Wednesday when Lebanon celebrates its independence day. He thanked Macron, who has been mediating as part of French efforts to try to ease tensions across the region, for his help.

Macron had leveraged France’s close relations with both Lebanon and Saudi Arabia to secure a deal that saw Hariri travel to Paris and open the door to a resolution of the crisis.

Hariri, who arrived at his residence in Paris in the early hours of the morning, told Aoun in a phone call from Paris that he would be in Lebanon on Wednesday for the celebrations, the Lebanese president said on Twitter.

“Lebanon is being shaken so it’s important Hariri comes to Paris for us to work with him on the best way out of the crisis,” said a senior French diplomat.

“We’re trying to create the conditions for a de-escalation in the region. We want to avoid a proliferation of crises that could get out of control.”

A French presidential source said Macron had reiterated that Paris wanted Hariri to return to Lebanon to ensure the country’s political system continued to function and that it was imperative it remained “disassociated” from regional crises.

Okab Saqr, a member of parliament for Hariri’s Future Movement, said after Hariri’s visit to France he would have “a small Arab tour” before traveling to Beirut.