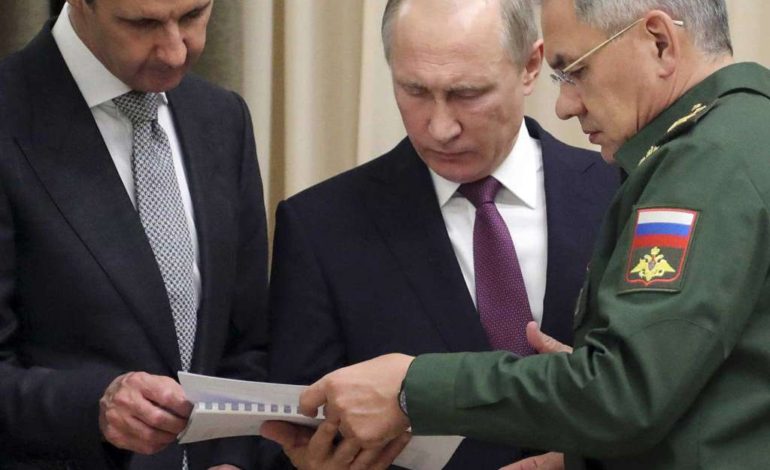 Putin and Assad looking at a document presented by a Russian general.

MOSCOW – Russian President Vladimir Putin hosted Syrian leader Bashar al-Assad to talk about the need to move from military operations to the search for a political solution to Syria’s conflict, the Kremlin said on Tuesday.

Russia is actively trying to build an international consensus around a peace deal for Syria, over two years after Moscow began a military intervention that turned the tide of the conflict in Assad’s favor.

Putin will meet the leaders of Iran and Turkey, two other powers with major stakes in the Syrian conflict, on Wednesday. He said he would follow up his talks with Assad with phone calls to U.S. President Donald Trump and to Middle Eastern leaders.

“We still have a long way to go before we achieve a complete victory over terrorists. But as far as our joint work in fighting terrorism on the territory of Syria is concerned, this military operation is indeed wrapping up,” Putin told Assad, in comments broadcast by Russian television.

“Now the most important thing, of course, is to move on to the political questions, and I note with satisfaction your readiness to work with all those who want peace and a solution (to the conflict),” Putin said.

The declared focus for Russia’s peace efforts is a proposed Congress of Syrian Peoples, to include all the country’s ethnic groups and the warring sides in the conflict.

Previous attempts to broker a peace deal have foundered because powers involved in the conflict have differing approaches. Iran, Russia and the Hezbollah militia have backed Assad, while the United States, Turkey, and the Gulf states have supported the Syrian leader’s opponents.

Putin met Assad on Monday evening in the Russian Black Sea resort of Sochi, although the Kremlin did not release information about Assad’s visit until Tuesday.

“I would like very much to discuss with you the main principles for organizing the political process, and the holding of a congress of the peoples of Syria, that is supported by you,” Putin told Assad.

“I would like to hear from you your assessment of the state of affairs today, and the prospects for the developments of the situation, including your view of the political process, which, in our view, must ultimately be carried out under the aegis of the United Nations.” For his meeting in Sochi, Assad stayed on Russian soil for a total of four hours, RIA news agency quoted Kremlin spokesman Dmitry Peskov as saying. It was Assad’s first publicly declared trip outside Syria since his 2015 visit to Moscow.

Wearing a dark suit and sitting across a small coffee table from Putin, Assad told the Russian leader: ”At this stage, especially after we achieved victory over terrorists, it is in our interests to move forward with the political process.

“We don’t want to look backwards. We welcome all those who truly want to see a political solution. We are ready to have a dialogue with them,” said Assad.

Underscoring the importance of the Russian military in propping up Assad’s rule, Putin presented the Syrian leader to top military commanders assembled at his Sochi residence.

“On behalf of the entire Syrian people, I express my gratitude for what you have done,” Assad told them. “We will not forget it.”

The Syrian conflict has entered a new phase with the capture at the weekend by government forces and their allies of Albu Kamal, the last significant town in Syria held by Islamic State.

Within Syria, only a few villages along the Euphrates river and patches of nearby desert, as well as isolated pockets in other parts of the country, now remain of the caliphate the militant group declared in 2014.

Most of the forces battling Islamic State in Syria and Iraq have said they expect it to go underground and turn to a guerrilla insurgency using sleeper cells and bombings.