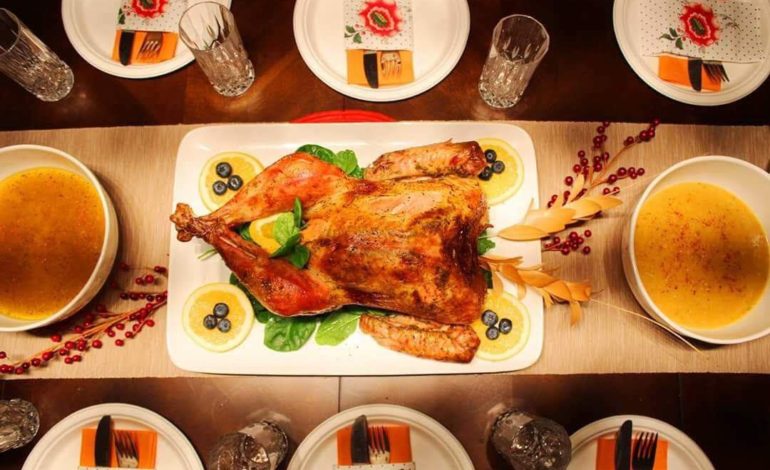 By Laida Sukari and Dalia Sukari

DEARBORN — According to statistics by “Static Brain”, an average of 51,650,000 total turkeys are consumed in America on Thanksgiving Day each year.

This national holiday became official in 1863 after President Lincoln declared that, annually, the fourth Thursday of November would be Thanksgiving.

Two things associated with Thanksgiving are acknowledging what a person is thankful for and charitable giving.

Collectively, charities have raised $116 million over the past four Thanksgivings, according to Smartasset.com

In Dearborn, the Arab American community does its part in giving back through many local food drives and, of course, partake in Thanksgiving celebrations with their families and friends.

Linda Shaer Tarraf, a Dearborn resident, celebrates Thanksgiving as a means for her family to gather and enjoy their time together.

Tarraf was born and raised in Oregon, in a town where there weren’t nearly as many Arab and Muslim Americans as there are in Dearborn.

She said that although her parents were only used to celebrating Muslim holidays, they never wanted her and her siblings to feel left out.

“They always went along with the tradition of a big family dinner for Thanksgiving,” she said.

However, after getting married and moving to Michigan, Tarraf has carried on such traditions to her children.

“We don’t look too far behind the meaning of the holiday,” she said. “It’s more for fun and for the family to get together as well as eat lots of good food.”

When Hosam Ahmad came to the U.S. almost 21 years ago, he wasn’t familiar with Thanksgiving, but he eventually grew accustomed to the holiday’s association of bringing family together.

“Living in Dearborn among a large Muslim community helps us in get our halal turkey and join our fellow neighbors during this festive time of the year,” he said.

“During Thanksgiving, my father usually speaks about his journey to this country, and how coming here not only changed his life but also the life of everyone else in the family,” Nora Alata said.

Nesrine Nassri believes that this holiday is a chance to appreciate the privilege of being an American; to celebrate it as a “gift.”

“The safety, the decent living, the good education, and mainly the equal chances,” Nassri said.

For Rowayda Younes, Thanksgiving is about giving and helping those who are less fortunate.

“I celebrate with my family to appreciate what we have and thank God for having each other,” Younes said. The Leaders Advancing and Helping Communities organization collects turkey bags before delivering them to 1000 families across Metro Detroit during its 12th annual turkey drive.- Courtesy of LAHC Volunteers at the HYPE Athletics Recreation Center packaged and distributed 700 Thanksgiving meals to the needy at HYPE in Dearborn Heights, HYPE in Wayne and the Islamic Institute of Knowledge in Dearborn – Courtesy of HYPE Staff members and appointees from the office of Wayne County Executive Warren C. Evans were the first volunteers to use Zaman International’s new Culinary Arts Kitchen. On Nov. 15, they prepared apple crisps and three different kinds of soup, which were given to Zaman’s client families. – Courtesy of Zaman International