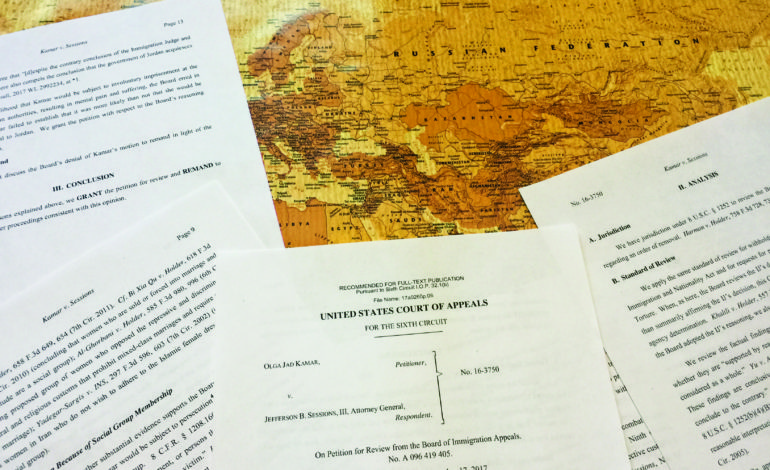 CINCINNATI — “Every year, 15 to 20 women and girls in Jordan are burned, beaten or stabbed to death by family members because they are seen as having transgressed social codes of ‘honor,'” according to a recent report from Rothna Begum, a researcher in the Women’s Rights Division of HumanRightsWatch.org.

Ruling unanimously in “Olga Jad Kamar v. Attorney General Jefferson B. Sessions III”,  three Sixth U.S. Circuit Court of Appeals judges have blocked the removal of a Jordanian woman, allowing her to avoid persecution similar to those described above, according to court documents. An F1 visa is issued to international students who are attending an academic program or English language program at a U.S. college or university. F-1 students must maintain the minimum course load for full-time student status.

A B-2 visa refers to tourism, pleasure or visiting.

Kamar, who got divorced in 2006, has three sons by her first marriage. In 2007, she married another man and had his child. The child was born two months prior to the second marriage. She said a cousin in Jordan has vowed to kill her because she got pregnant outside of marriage.

According to court documents, Kamar’s sister, Mona, asserted during her testimony that if Kamar returned to Jordan, their cousins would find out and be waiting for her at the airport.

Jordan is going through a transformation caused by a tipped balance of social forces where secular and civil society ideas are winning the fight and getting the support of more Jordanians after the total defeat of ISIS and other religiously motivated political movements. -Kayed Masarweh, Jordanian American

The other part of Kamar’s defense was that the Jordanian government puts women in prison, in the guise of protective custody, to protect them from family members who may try to harm them.

“Kamar testified that she fears returning to Jordan because her cousins intend to perform an honor killing on her and her child in accordance with Jordanian custom,” court documents read. “She explained that even though her family is Catholic, they live in Jordan where the majority of people are Muslim and the law is according to Islamic law. Her family follows local traditions. In Jordanian society, if a woman shames her family, the solution is to cleanse the family and restore its honor by killing her.”

The court agreed with her and remanded this decision back to the Board of Immigration for further proceedings.

“Given the likelihood that Kamar would be subject to involuntary imprisonment at the hands of the Jordanian authorities, resulting in mental pain and suffering, the board erred in concluding that Kamar failed to establish that it was more likely than not that she would be tortured upon removal to Jordan,” court documents read.

“It doesn’t matter where they put you,” Kayed Masarweh, an immigrant from Jordan, told The AANews. “The Jordanian government could put you on the moon or the Four Seasons in the fanciest part of Oman. The Jordanian society does not see these things as acceptable behaviors. That is something that is going to come out of the natural maturation of society. That doesn’t happen because the Jordanian government issues a law.”

“The Middle East in general, for the longest time, has lived and continues to live and suffer [from] the Wahhabi type culture that is basically financed, dominated and promoted by the system that is in Saudi Arabia,” Masarweh said. “It is a conservative society, a family-based society that believes in traditional values.

“Do they agree with people living together, having sex with each other and just doing whatever they want to do?” he asked rhetorically. “No, definitely that is not the norm in Jordan. They disagree with that. [Although] 99 percent of Jordanian people would disagree with the punishment of putting people to death based on such behavior.”

“I am not aware of any organization in the government that promotes or shies away from protecting women,” he said. “That is not to say that the claims of this lady are not accurate.”

“Every human life is precious,” he added. “Anything above zero is a crime, and it is a disaster. In the grand scheme of things, if you remove the hype around this problem it is probably not a high number; and if we look at the trend, the trend is definitely going down.”

Masarweh said he graduated from the University of Jordan. When he graduated, he saw some of his peers live a Western lifestyle and said he doesn’t remember anyone getting killed for it. “People will look at you different, but it’s not like they are going to come after you with AK-47s,” he said.

“Jordan is going through a transformation caused by a tipped balance of social forces where secular and civil society ideas are winning the fight and getting the support of more Jordanians after the total defeat of ISIS and other religiously motivated political movements, like the Muslim Brotherhood in Egypt, Syria and other places,” Masarweh added.

He compared the people who commit these “honor crimes” in Jordan to the extremists of any kind that exist even in the United States. He said if there is even a 1 percent chance that Kamar will lose her life if she returns to Jordan, he is glad that she is able to stay.

When asked if he’d witnessed the type of culture that allows these types of crimes to occur in Jordan, Masarweh said, “I did witness the environment. No doubt.”