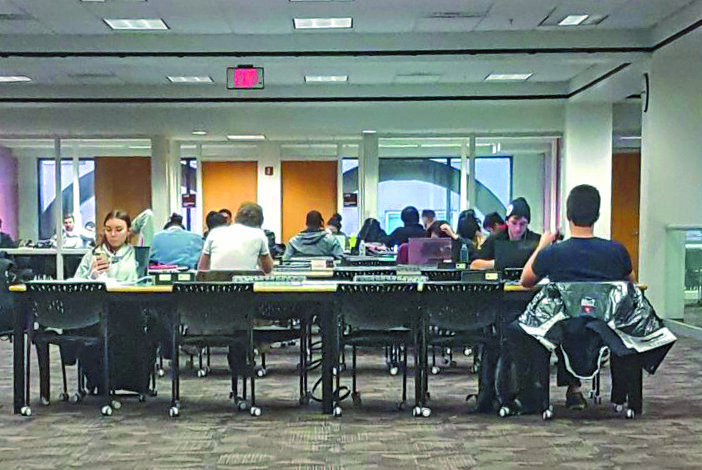 DEARBORN — The holiday season has arrived and with it students’ elevated stress levels.

Even though they have much to look forward to in December, like a relaxing break, that doesn’t divert their attention from all the work they have to do at the end of the semester to be able to enjoy it.

While college stress is endless, it tends to go overboard during the final two weeks.

Local organizations have continuously tried to break the mental health stigma in the Arab American community, but there are still some misconceptions.

When it comes to stress, many parents like to believe it’s normal, basically a mutual feeling for everyone, and could never result in repercussions if not treated. However, reports say it’s not the case, as it has resulted in stimulant abuse and ultimately the deaths of young people in the community.

The AANews decided to look into the effects of stress and ask Arab American students at local universities about its existence in their life and how they cope with it.

Two students said they at least know one person who misuses or has considered stimulants or other prescription drugs to deal with stress. They did not want to share their full names for confidentiality reasons.

Stress and its effects

According to Helpguide.org, stress is the body’s response to demands or threats.

“When you sense danger— whether it’s real or imagined— the body’s defenses kick into high gear in a rapid, automatic process known as the ‘fight-or-flight’ reaction or the ‘stress response,'” it said. “The stress response is the body’s way of protecting you.”

It’s healthy when it’s natural, as it helps people concentrate and overcome challenges. For some students, it stimulates better study habits. However, when it becomes difficult to manage, it may actually cause students to consider harmful stimulant pills to help them calm down and focus.

“Studies show that a growing number of high school and college students are turning to stimulants like Attention Deficit Hyperactivity Disorder (ADHD) drugs and energy drinks to help them through their stress — particularly during exam time,” a 2008 article by the University of Michigan Health System said.

Last year, SoberCollege.com reported that one in five college students have misused prescription stimulants at least once and more than half said they were easy to obtain without a prescription.

“The stress was eating me up,” he said. “I didn’t know what to do, so my friend offered me pills that help him cool down and focus. I ended up taking them home with me.”

Hassan said they were Adderall pills and that he immediately threw them away after reading the side effects online.

The most commonly misused stimulants are amphetamines (Adderall) and methylphenidate (Ritalin), according to DrugAbuse.gov. Adderall is usually prescribed for ADHD patients, while Ritalin is prescribed for narcolepsy and ADHD.

“Many guys are dying in our community because of these drugs,” he said. “I don’t mean just physically, but even mentally. They’ve become so addicted that they don’t even realize how much they’ve changed.”

According to research, stimulant abusers are at risk for serious side effects, like severely high blood pressure, irregular heartbeat, breathing problems, seizures and mood disorders. They can even lead to strokes, confusion, delusions, paranoia and hallucinations if taken in high doses or frequently.

Hassan resorted to changing his study habits and managing his time, instead of going with the trend.

“I stopped procrastinating and now keep a planner,” he said. “I work out for an hour every morning and I take breaks when I’m studying… I sleep better.  I think everyone goes through a difficult time freshman year because you have to adjust to the new system and it really depends on how you do it.”

A student at the University of Michigan-Dearborn named Zeinab said her stress caused her to experience anxiety attacks, especially the last two weeks of a semester. She said she knows someone who takes stimulants to de-stress and focus, but never thought about taking pills herself.

“Mental health issues are taboo in this community, so anything you experience is difficult to share,” she said. “But, we need to break the stigma… Stress is more than just a phase to some people.”

She said her doctor immediately prescribed a depressant called Xanax, instead of suggesting a visit to a therapist. Zeinab did not take the pill, but rather decided to visit a psychologist behind her parents’ backs.

“[The psychologist] helped me manage my stress and anxiety attacks,” she said. “She helped me become more in tune with myself and balance my time when it came to school. She didn’t just give me pills that would’ve made me feel worse.”

Zeinab said she eventually told her parents about her visit and they came to an understanding that stress is a serious problem that affects a person’s mental and physical well-being because she looked happier and healthier. She said she’s disappointed in the fact that doctors in the community don’t take mental health issues seriously and prescribe drugs without considering the harm in doing so.

She recalled the clinic raid that took place in Dearborn in August and wondered how many students her age were possibly addicted to prescription stimulants, opioids or depressants.

At the time, Dr. Mohammed Derani was caught running a pill mill.

Data from the Michigan Department of Licensing and Regulatory Affairs (LARA) showed that Derani, a West Bloomfield resident, placed among the top productive prescribers of controlled substances in Michigan in 2015 and 2016. He prescribed an average of more than 43 controlled substances on every workday between January 2015 and August 2017 and more than 500,000 pills since this January.

Dr. Ed Jouney, an addiction psychiatrist at the University of Michigan and a co-founder of SAFE Substance Abuse Coalition in Dearborn, told The AANews in August that addiction is “a serious medical condition in which an individual’s behavior has changed to the point where they compulsively seek out a specific class of medicine” and that it’s important to understand that it is not a “moral feeling.”

He said individuals undergoing addiction need to know they’re not alone and can recover.